FRONT PORCH: The Conceit and Danger of Blind Ambition

“To lose patience is to lose the battle.” – Mohandas Gandhi

AFTER the results of the 1972 general election, Sir Randol Fawkes, honoured as the Father of Labour who helped to form the first Majority Rule government and became Minister of Labour and Commerce, was out of frontline politics and would never return as a Member of Parliament. 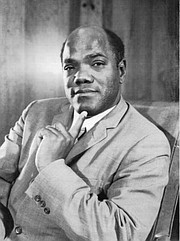 First elected to the House of Assembly in 1956, the labour lion, who earlier rivalled Sir Lynden Pindling for public affection, largely became politically irrelevant and was marginalized on the sidelines of public affairs as The Bahamas moved toward independence in 1973.

By contrast, most of his political colleagues remained on the frontline of politics post-independence as the country entered a critical period of national development as a sovereign nation. These colleagues helped to shape the modern Bahamas.

Few today recall that in the 1970 vote of no confidence against the Pindling administration, it was Sir Randol, who was no longer a cabinet minister, who placed the motion on the agenda of the House and who moved the resolution. But unlike the Dissident Eight, Sir Randol did not stay to vote on the motion.

By this time, Sir Randol’s unreliability and volatility had become notorious. He was no longer trusted by either the Progressive Liberal Party or the rebels, who became the Free PLP, which quickly evolved into the Free National Movement.

The political struggle and contest between the PLP and the FNM was decisive in creating a viable a two-party parliamentary democracy. Sir Randol was largely uninvolved politically during this period of contestation in the political maturation of the country.

While Sir Lynden and the PLP were in a political war with former colleagues in the PLP who formed the nucleus of the new FNM, Sir Randol was largely inconsequential, and no longer a threat to Sir Lynden, the latter requested a knighthood for the Father of Labour, which was conferred on him in 1978.

Sir Randol left a critical mark on the country and played an important role in the country’s history, some of which is chronicled in his memoir, The Faith That Moved The Mountain.

For all of his giftedness, patriotic spirit and contributions, Sir Randol remains a cautionary tale for Bahamian politicians. It is a cautionary tale about political viability and stability, being a dedicated member of a team and loyalty and commitment to a political party.

It is also a cautionary story for those who jump or meander from party to party in pursuit of their blind ambition and those who create vanity parties as instruments of their own conceits and narcissism, parties which they typically abandon when it no longer serves their interests.

To his credit, the Coalition for Democratic Reform led by the late Dr. B. J. Nottage, was decidedly not such a vanity party. The CDR had a number of progressive ideas for the country and good talent like Charles Maynard and Phenton Neymour, both now deceased.

The celebrated four-star American General George S. Patton (1885-1945) ranked alongside the renowned General Douglass MacArthur as the two greatest US generals put on the battlefield during World War II. Both men often thought they were more consequential and important than the President of the United States.

For all his overweening, powerful and at times explosive ego, Patton appreciated the vagaries of life. He famously offered a classic reminder to all those who possess power and fame:

“For over a thousand years Roman conquerors returning from the wars enjoyed the honour of triumph, a tumultuous parade. In the procession came trumpeters, musicians and strange animals from conquered territories, together with carts laden with treasure and captured armaments.

“The conquerors rode in a triumphal chariot, the dazed prisoners walking in chains before him. Sometimes his children robed in white stood with him in the chariot or rode the trace horses. A slave stood behind the conqueror holding a golden crown and whispering in his ear a warning: that all glory is fleeting.”

Overconfidence, especially in those gifted in one field who believe such talent is easily transferable to the political realm, is often thought of as the “mother of all biases”.

In our political history, some with professional degrees in law or medicine from celebrated universities, often deemed themselves politically smarter or more visionary than those who did not possess similar academic credentials.

In the 1960s, a scion of a prominent black family, who deemed himself as one of the smartest politicians of his era and who at one time led his own political party, thought that he was destined to become Prime Minister. His ambition was never realized and he consistently had difficulty winning a seat in the House.

Those who achieved professional degrees in the United Kingdom in the 1950s and 60s were often described as having BTEs (Been To England). Some of them, like Sir Lynden, had natural political instincts and native wisdom.

Others, who had excellent academic credentials, were often shocked when those who did not similarly achieve tertiary education abroad, upended them politically, including in parliamentary debates.

Some of the BTEs were often politically outmaneuvered by those who enjoyed native genius and who were well-practised and well-read in the political arts and craft.

The Nobel Prize scientist Daniel Kahneman noted that if he possessed a magic wand one thing he would change about human psychology would be the elimination of the superiority complex.

A conceit and danger of blind ambition, is the inability of some to appreciate that they are not as politically gifted as they might conceive and that there are others, whom they may feel superior to, who are actually more politically adept.

The tests in our parliamentary system for becoming a successful politician and the highest prize of becoming Prime Minister is not singularly how one sees oneself. The tests include: how party members, parliamentary and cabinet colleagues, and eventually the general public assesses a political talent or actor.

Former MPs Andre Rollins and Branville McCartney shared a similar trajectory. Both had their own vanity parties, both have a certain charisma and are intelligent men who were capable in public debate.

And both possess massive egos and overweening ambition, wide and treacherous shoals they were unable successfully to navigate and upon which they crashed. Both proved politically unstable and incapable of playing the long game, with colleagues no longer able to trust them. They failed the test of loyalty to their political parties.

Mr McCartney infamously abandoned the FNM and his own vanity party, the Democratic National Alliance. There are rumours that he wants to rejoin the FNM. Some believe this would be good for the party while others are strongly opposed, believing he is politically untrustworthy and incapable of change.

Having aggressively abandoned the FNM before, were he to return and considered for a seat, he should not be given a choice seat and must demonstrate contrition, especially for the spoiler role he played in the 2012 general election. Acknowledging and rewarding those who remain constant in a political party is simply good politics.

Golden boys and girls quickly elevated often prove a political disaster. Then there are those who go shopping for seats in both parties, who have no loyalty except to their own conceit and blind ambition. When these ambitions are unmet, they buck the party of convenience for another party of convenience. There is a word for this.

During the COVID-19 pandemic, there are those in politics and in the media who are incapable of rising above their petty grievances. Now is not the time to complain about the fire. One must clearly appear more decidedly committed to helping to put out the fire.

A common fate of some of those in the political arena is that when they leave certain posts or are not re-elected, they feel increasingly irrelevant. As an antidote, they seek attention and are constantly trying to grab headlines, often with sensational and silly notions.

A classic lesson in politics is that politicians and journalists are rarely friends. Both serve each other’s temporary interests, which can quickly flounder. Journalists enjoy politicians lobbing criticisms at their party, providing the former with fodder and headlines. Conflict and political battles and infighting always sell.

But when a politician is no longer useful, they will quickly be dropped, never truly realizing how they were used and how the journalists they trust or once trusted were privately briefing against them with other journalists and politicians.

It is called blind ambition for a reason. The one blinded by massive egotism, narcissism, overconfidence, a lack of humility and the inability to grow and to learn, typically end up with shortened political careers.

With their ambitions unfulfilled they often remain blind as to why their political careers were not as successful as those who sat tight, kept their head down, learned the political arts and cultivated colleagues and the party faithful.

Bishop Fulton J. Sheen used to remark: “Patience is power. Patience is not an absence of action; rather it is ‘timing’ it waits on the right time to act, for the right principles and in the right way.”

Political success, especially in our system, typically does not go to the impulsive and impetuous or the politically unstable and volatile. It goes to the constantly growing and maturing individual who has the patience, the wisdom and the steely tenacity to play the long game.