Front Porch: Trump Is Not An American Anomaly 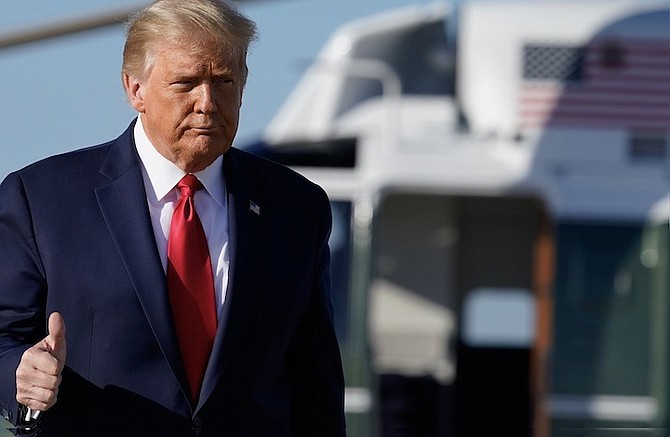 Around 1997, about 23 years ago during a trip to New York City for a social justice conference, this columnist first met a fellow participant who lived in the city.

The new colleague was a passionate advocate for a host of social concerns, including: racial equality, fair housing, immigrants’ rights and poverty in the one of the richest cities in America and the world.

During an evening break, we visited a gleaming steel city landmark, with an impressive atrium and high-end stores which opened in 1983, with luxury apartments opening in the ensuing years.

What was the relatively new landmark adorning Midtown Manhattan at 721-725 Fifth Avenue, between 56th and 57th Streets?

It was the 58-floor, 664ft-tall Trump Towers, the corporate headquarters of 37-year-old Donald Trump, an up-and-coming mogul and real estate developer in Gotham, the epicentre of American power, prestige and celebrity.

The colleague loathed Trump, whom he saw as an affront to various values related to economic and social justice.

He regularly joined protests outside the towering heights of Trump’s business headquarters, which was built amid allegations of underpaying contractors and the use of non-legal migrant workers. Trump had filed a lawsuit because the building was not tax-exempt.

According to The Finger Lake Times, Trump sued one of the contractors for “total incompetence”. Construction was halted twice because of protests condemning “the dearth of minority contract workers”.

The colleague insisted Trump represented a dark side of the American ethos and capitalist enterprise, who was intent on pushing scores of poor people out of the city in his rapacious grab for real estate, which he intended to develop and turn over to the super-rich.

At the dedication of the building Mayor Ed Koch stated: “This is not your low-income housing project ... of which we need many. But we also need accommodations, uh, for those who can afford to pay a lot of money and bring a lot of taxes into the city.”

The colleague was convinced Trump was a threat to the poor, the embodiment of an American brand of capitalism harmful to basic social justice in a city and nation with gulfs of ever-growing inequality.

And he was haunted by the possibility of Trump garnering even greater economic and political power in the city and the country.

To this writer, the political prognostications seemed hyperbolic and over-the-top, his concerns exaggerated, his belief that Trump could transform his economic interests and celebrity into greater political power, unfounded and mostly risible. He was, tragically, prescient.

Donald J Trump, a narcissistic child of white privilege, an unabashed white supremacist, a celebrity huckster, a fierce misogynist who gleefully bashes immigrants and whose administration had immigrant children detained behind detention cages, embodies a deep-seated part of the foundational psyche of America.

He is not an American anomaly. He represents one of the primordial faces of America. But he is not the only face of America. There is another America: tolerant, compassionate, altruistic, internationalist, hungering for justice, welcoming of immigrants, philanthropic.

The titanic struggle between the faces of America is even clearer in the 2020 election, which may push the pendulum in a certain direction but will not resolve the enduring struggle for the character of the United States, with its underlying national mythologies.

One of these myths is that America is essentially an “anointed land”, favoured by the Almighty, ie a white Christian God, who has a divine plan for America, which many Americans believe as an article of religious and civic faith.

The great 20th century American theologian and pastor Reinhold Niebuhr dissected and exploded this construct in his writings and preaching, forever reminding America of the demands of biblical justice and the conceits of national hubris, which is not an American conceit alone.

Most nations tend to such conceit, though the American Colossus, because of its history and power, promotes a particular form of hubris.

Whether Trump, who was formerly pro-choice, is a man of faith or a charlatan who uses faith as a prop to advance his self-interests is irrelevant. For many of his faith-based fans and sycophants his pretence of belief and play-acting are enough to soothe their consciences and sometimes fanatical needs.

There are of course non-religious brands of American exceptionalism, which even many moderate Americans buy into as a sort of nationalistic duty and supposedly patriotic emblem.

Ironically, though many, if not most Americans, evince a natural antipathy to the power of the state and the federal government, most also believe America enjoys a superior form of government than most of the world.

The Electoral College, a compromise in the then new slave republic is antiquated. Were the American founders alive today they would likely be appalled that the system has recently produced two Presidents (George W Bush in 2000 and Trump in 2016) who lost the popular vote, but who became President, the former with the help of the Supreme Court.

The US Senate has become a hidebound club enthralled to corporate interests, paralysed by the filibuster and other conventions, structurally giving considerable and non-commensurate power to rural less populated states.

Despite the tragic level of gun violence and deaths in America, and despite overwhelming public support for certain background checks, such legislation is blocked in the US Congress because of the lobbying might of the gun lobby.

And despite the glowing rhetoric, the Senate is not the most deliberative body in the world. A number of other parliamentary democracies are decidedly more deliberative and democratic.

The perennial struggle for the ideological balance on the US Supreme Court and on the federal judiciary, mystifies most of the world, where appointments are typically made by more independent judicial bodies, absent all of the ideological battles and theatre.

There are admirable features in the US system of government, but the country could learn much about democracy from other longstanding democracies and systems.

Were Trump in a parliamentary system such as Canada or the United Kingdom, he likely would already have been removed in a vote of no confidence early in the COVID-19 pandemic.

The Confidence Man is an episode in the Netflix series, Dirty Money. A review of the episode notes: “Tracing Trump’s developer-huckster-populist journey, director Fisher Stevens … argues that our current President is nothing more than a modern American conman, someone who profits off his name to the detriment of the general public and who commands a reptilian awareness of the media.”

But at the beginning of his rise to the presidency during the 2016 nomination process, they happily gave Trump tremendous airtime because he was good for ratings, despite his unmatched vulgarity, racism and xenophobic broadsides against immigrants, especially Hispanics.

The American media was critical to his accession to political power. In office, Trump has continued to mesmerise and manipulate the media, including right wing and left wing media houses. Much of the media and Trump have incestuously used each other through all manner of intercourse. Bill Pruitt, the producer of The Apprentice noted of the TV series: “What we did, that was a scam. That was an entertainment.” The Trump ascendancy and presidency are like a Mel Brooks production, except the parody and farce has had real-life tragic consequences for America and the world.

How did someone such as Donald Trump relatively easily commandeer the Republican Party and become the American President, who continues to enjoy an unwavering base of support? Why do some so fervently support him? What does he understand about a deep-seated element of the American psyche and experience?

What hyperbolic, propagandist drivel! There are enough American blacks who know Trump that have refuted the idea that he is racist (Mike Tyson, Herschel Walker etc). How can he be a xenophobe when he has married more than one non-American?

I would be willing to put up with a mans personal defects if he produced results in the best interests of the country. Ask yourself what a black man like Minnis has done for a country full of blacks? That seems like a more salient question for which the answer is pain and misery!