Front Porch: Religious Leaders Would Do Well To Remember What Their Real Role Is In Our Society 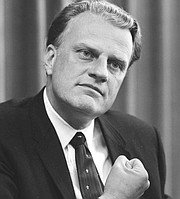 At the time of his death in 2013 at the age of 99, the American evangelist and Southern Baptist Minister Rev Billy Graham was a revered figure globally.

From the 1940s onward, Billy Graham preached approximately 400 crusades to hundreds of millions in approximately 185 countries. Through television and in-person appearances he reached over one billion people. His main focus was the spiritual life and the love and divine mission of Jesus Christ.

He was a soul of tremendous humility who did not seek self-aggrandisement nor riches as have successive generations of publicity-seeking and reprobate prosperity gospel ministers who have enriched themselves at the expense of their congregants and the poor.

The religious landscape in The Bahamas is adorned with scarlet-purple-and crimson-robed religious charlatans who seek fortune and fame, vulgarly using the Gospels of Jesus Christ for personal profit and notoriety.

During his storied ministry, Rev Graham met with every US President from Harry S Truman to Barack Obama. A lifelong registered member of the Democratic Party, he became especially close to Presidents Lyndon Johnson and Richard Nixon, but as Sarah Pulliam Bailey observed: “He declined to sign or endorse political statements, and he distanced himself from the Christian right... His early years of fierce opposition to communism gave way to pleas for military disarmament and attention to AIDS, poverty and environmental threats.”

As he grew older, Rev Graham publicly noted that at times he may have been seen to be too close to political power and to various American presidents. He noted: “It was naïve of me, I suppose, to think that such a close relationship with a President would never be used to serve his political ends.”

Rev Graham serves as a pastoral example for those religious leaders tempted to political power in the image and likeness of the Pharisees, who often blended political and religious power to serve their own kingdoms rather the Kingdom of God.

“I’m for morality, but morality goes beyond sex to human freedom and social justice. We as clergy know so very little to speak with authority on the Panama Canal or superiority of armaments. Evangelists cannot be closely identified with any particular party or person.

“We have to stand in the middle in order to preach to all people, right and left. I haven’t been faithful to my own advice in the past. I will be in the future.”

Rev Graham articulated a considered theological and philosophical worldview about the role of religious leaders in civic dialogue and the public sphere, an understanding of which eludes many ministers in The Bahamas.

Many pastors in The Bahamas seem unaware of the Age of Enlightenment. Many still do not have a rudimentary understanding of the separation of church and state, of religious tolerance and of the necessarily secular nature of modern democracy.

The Bahamas is not a theocracy, though some religionists seem to believe their particular and often fundamentalist worldviews should reign supreme in a democracy.

The late Monsignor Preston Moss often lamented that a majority of religious ministers in the country did not come from or have a tradition of reason or a tradition of social teachings. The ignorance of basic theology, ethics and philosophy of many religious leaders in The Bahamas is breathtaking.

As a result, their preaching, commentary and public announcements are typically woefully deficient, amateurish and unintelligible. By contrast, both the Anglican and Roman Catholic communions enjoy an extensive body of social teachings.

The main thrust of these traditions is concern for the ethical and moral dimensions of public policy. Neither of the communions comments as technical experts. Rather, they use Scripture and their social teachings to promote the dignity of the human person and other principles.

This past Sunday, Bishop Neil Ellis sparked controversy over a sermon he delivered at his Mount Tabor church.

In preaching about King Nebuchadnezzar from the Book of Daniel and in a series of feverish rants about the Competent Authority, it seemed abundantly clear Bishop Ellis was engaged in a pointed, personal and heated attack on the Prime Minister for the Government’s COVID-19 policies.

It is curious and perplexing that Bishop Ellis never found this same level of supposed prophetic fervour to critique the alleged corruption and scandals of two previous Perry Christie administrations. Bishop Ellis also referenced as a sort of authority, words from the late Sir Lynden Pindling.

Perhaps he might note in detail the ravages of the pernicious drug era of the Pindling years, and the downward moral spiral of our country, which caused The Bahamas to be labelled, “A Nation for Sale”, as Sir Lynden was unable to account satisfactorily to a commission of inquiry for funds in his account way in excess of his salary.

Like some in the media, who seem to feel Dr Minnis should be more solicitous to them, is Rev Ellis piqued that he is not closer to political power, perhaps as an advisor to the Competent Authority?

In response to Bishop Ellis’s sermon, Free National Movement Chairman Carl Culmer released a statement in which he stated: “In the Christian tradition it is only God who judges the heart and the faith of one his children. … Prime Minister Dr. Hubert Minnis is a Christian and a member of the Catholic community.”

Mr Culmer continued: “It is unfortunate that Bishop Ellis would use the pulpit where he was expected to provide an uplifting message of hope to his congregation to launch a vicious, mean-spirited political attack on the Prime Minister of our country, who is working hard to keep Bahamians safe during the worst public health crisis in our country’s modern history.”

Bishop Ellis is now reportedly saying that he was not questioning the Prime Minister’s faith but was referring to someone else. Those who listened to his sermon and the context of his remarks will have to assess for themselves to whom they believe Bishop Ellis was referring.

“I realise that sometimes when sermons are hard, there is a need or feeling of a need to censor the voices of God…

No one is seeking to censor Bishops Ellis or Fernander. But just as they have a right to speak and offer their views, so do other citizens, including politicians. Indeed, Bishop Fernander has offered all manner of inane commentary and theological gobbledygook over many years.

Bishop Fernander dug himself a deeper theological hole: “When we get to a place where we are going to have politicians writing to say what they liked or didn’t like about a sermon, it’s a dangerous place. The interpretation – prophets will always speak to powers that be and preachers will always come against one or all governments and we must be grown enough to accept that if it isn’t for you then, just let it go.”

What spectacular arrogance and hubris. A preacher has a right to skewer and attack a politician, but a politician has no right to respond?

The good Bishop Fernander might be more comfortable in a theocracy like Iran, where only the views of the religious elite are allowed. His comments are profoundly undemocratic. The “dangerous place” is that he seems to want to censor politicians.

Bishop Fernander should also tread lightly in proclaiming who is a prophet. The prophetic tradition is a theologically complex matter which should not be trivialized.

Not every religious minister is a prophet, with the self-proclaimed prophets likely to be the less prophetic. Deeming oneself a prophet is akin to self-canonisation as a saint.

Among the tests of the prophetic tradition are those of social and economic justice and calling a people to repentance, including for their abandonment and neglect of the anawim or the poor.

If Bishop Fernander and his soul mates truly wish to hear and heed a prophetic voice and witness, he should read and digest Pope Francis’s recent encyclical, Fratelli Tutti: On Fraternity and Social Friendship.

In the encyclical, the head of the Roman Catholic community calls the global commons to collectively confront the existential threat of climate change and to become better stewards of God’s Creation.

Unlike some, Pope Francis, out of humility would never call himself a prophet, nor would he judge the heart and faith of a national leader, nor would he wildly rant in opposition to basic emergency measures required to save and to secure human life during a global pandemic during which all of God’s children are suffering.

The Bahamas needs more religious leaders like Pope Francis, who continues to demonstrate humility, love, a special care for the poor and compassion for all.

The quote by Sir Lynden is just that, a quote " if you don't fight for it you don't deserve to have it". The quote is just that a quote, so don't go mixing that with anything else. Thank you.

Bishop Ellis speak your mind. You walk and talk with the Bahamian people. You feel their pain.

John the Baptist and Jesus spoke up against Authorities that abused their power and put yokes upon the poor that were too heavy to bear.

Corruption of the PLP? Try the FNM. Should you start with the Our Lucaya? Why did the FNM buy the Hotel. Then try to sell it. they are not real estate agencies..

Caribbean Cruise could have purchased the hotel from Hutchison. the hotel was on . the market for sale.

Then go to BTC and the giveaway.

Firstly, we need to value education and the idea of scholarship and critical thinking. These ministers talk like they are stupid. But, they are not. They are just abjectly ignorant. Ignorance can be overcome by open minded study. The bible is a human created document that has been translated many, many times over. If you are illiterate, or worse, alliterate, than the chances of finding any truth in a written document is indeed quite small. The pastors here in The Bahamas are allowed their perch because their followers are even less educated than they, if that can be imagined? Advanced study and scholarship can be recognized by those who share similar levels of awareness. We too often confuse superstition with spirituality. And, yes, there is a difference. The bottom line is this. Education allows humanity to gain insight into the inner workings of life in general, including insights into the mystical and spiritual worlds. Foregoing education and intense scholarship, and then asking people to take you seriously as a moral leader is downright ridiculous. One only has to listen to these self professed pastors to realize that learning, true learning and critical thinking and a true concern for the wellbeing of others is not high on their list of things that are important. Though, as a country we continue to say we value education as a way to achieve our dreams and to improve our country, we, in many ways, vote to fail on this matter over and over again. Education requires hard work, humility, open-mindedness and a lifelong commitment. Perhaps we have the reason right there that many of us feel that our pastors have no clout in a modern, decent society.

Education is indeed necessary. but common sense is more important. There are too many Educated fools.

There are gifts from GOD.

Peter was a mere FISHMAN to whom God gave the keys to the kingdom.