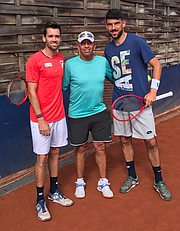 TENNIS is back and so is Bahamian John Farrington as he takes advantage of the opportunity to continue his coaching career with a number of players on the international scene.

The former national champion and Davis Cup player/captain, is currently working with touring players American Austin Krajicek from College Station, Texas and Franko Skugor from Croatia in a tournament in Kitzbuhel, Austria through Sunday when they will head to Rome for their next tournament before they prepare for the French Open at the Stade Roland-Garros in Paris, France at the end of the month.

Over the past year, Farrington was coaching Krajicek, who started playing doubles first time now with Skugor. The duo are seeded at No.4 at the Generali Open.

“He works extremely hard and he is improving each and every day,” said Farrington, of Krajicek. “Franko just started playing doubles, so they have formed a great combination.”

Krajicek, just after he and Skugor pulled off a 5-7, 6-3, 7-6 win over Nikola Cacic and Dusan Ljovic from Serbia in their first round match on Tuesday, said they’ve had a pretty good year so far, despite the pandemic.

“We’ve got in a few days before Cincinnati and we had a good tournament there and we’ve gotten off to a great start here at this tournament,” Karajicek said. “We just have to stay healthy. If we can do that, I think we can do some damage.”

As a coach, Krajicek said Farrington’s work ethic has rubbed off on both he and Skugor and they can’t help but improve.

“We want to get the wins, so Franko and I are just dotting our Is and crossing our Ts. That’s what it comes down to, just putting in the work and adjusting to play the match. So it’s a great fit for us and we’re making it work.”

With tennis slowly making its way back to the international scene amid the coronavirus pandemic, Farrington said they are all excited about getting back on the court.

“It’s different with no spectators. They are trying to keep us in a sort of bubble where we have to wear our masks, except for when you are on the court playing,” he said.

“We’re tested just about every day or at least every other day, so they are trying to keep us all safe and healthy.”

Krajicek, a 30-year-old southpaw, said the Covid-19 environment is obviously different from what they are used to since he turned pro in 2012, but they’re making the necessary adjustments. “There are a few fans this week, so it’s starting to look a little normal,” he said. “But it’s going to take some time wearing a mask everywhere and having to go through all of the protocols and having to get the acceptance letters from the various governments to travel to the countries.

“We have to do what we have to do, but I think we are all enjoying it and excited to be back and playing in some tournaments. That’s all that we could ask for. We’re just delighted to have John around as our coach. He helps to get us through the day off the court.”

Since 1998, Farrington has been coaching on the circuit, having worked with such players as Bahamian Mark Knowles and his long time partner Daniel Nestor from Canada and later his partner Nenad Zimonjic from Serbia in addition to Bahamian Mark Merklein and India’s doubles duo of Mahesh Bhupathi and Leander Paes, Oliver Marach from Austria and Mate Pavie from Croatia.

At times, he also coached Anastasia Rodionova from Australia; Alla Kudryavsteva from Russia and Sania Mirza from India on the WTA Tour and is currently working with identical twin sisters Nadia and Lyudemelia Kichenck from the Ukraine.

While he’s doing his coaching chores, Farrington is also keeping an eye on the up and coming local tennis players, including Justin Roberts, who at age 23, is currently ranked at 786 in singles and 936 in doubles.

“I know he have a bright future ahead of him,” Farrington said. “So I’m keeping an eye on him and also Jacobi Bain, who attend Albury Academy and hit with some of the top players whenever they visit the Bahamas.”

Farrington, who resides in Asheville, North Carolina, is the son of former veteran tennis player and hotelier J Barrie Farrington; was the Director of Tennis at the One and Only Ocean Club for 14 years and competed in the ATP Tour for seven years.

He was also an 11-time national champion in singles and doubles; represented the Bahamas on the Davis Cup for 10 years and coached the Bahamas team of Knowles and Merklein at the 2004 Olympic Games in Athens, Greece and Knowles and Devin Mullings at the 2008 Games in Beijing, China.