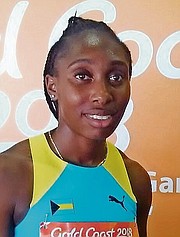 DESPITE her season’s best for ninth place as her Jamaican training partner Elaine Thomson-Herah posted a world-leading time, Bahamian sprinter Anthonique Strachan said she was pleased with her 2020 debut in Europe in the COVID-19 atmosphere.

At the 40th edition of the Golden Gala Pietro Mennea, the Italian leg of the Wanda Diamond League, which took place in the Olympic Stadium in Rome on Thursday, Strachan finished in a dead heat in the women’s 100 metres in a season’s best of 11.42 seconds, the same time as eighth place finisher Marije Van Hunenstijn of the Netherlands.

Thompson-Herah, the double sprint Olympic champion from Rio de Janeiro, Brazil in 2016, ran away from the field to stop the clock in 10.85 to move past reigning World champion and fellow Jamaican Shelly-Ann Fraser-Pryce, who previously set the stage with the century’s leading time of 10.86.

American Aleia Hobbs was a distant second in 11.12 and Ivory Coast’s Marie-Josee Ta Lou, a two-time World Championships’ silver medallist, was third in 11.14.

Strachan, who came out of a series of meets in Jamaica with previous season’s best times, said she was satisfied with the straightaway performance, considering the fact that her forte is the half-lap race..

“I got a season’s best out of it and that was my third 100m for the year,” Strachan said. “So everything is just a building block for 2021, so I can’t feel bad about the performance.”