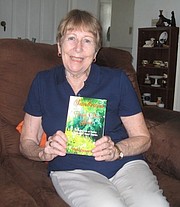 “Once out of sight from the main road, they relaxed on a seat beneath a casuarina tree and kissed. Then they gazed out across the sapphire blue sea to a lone sailboat on the horizon. The sun was going down, the sky like an artist’s canvas with gold and orange brush strokes. The sweet aroma of a barbecue drifted along the sea shore.” – Excerpt from the short story "Love at Sunset".

As a special Valentine’s Day treat, local author Fay Knowles is offering the e-book edition of her popular "Sunbeams from The Heart: A Collection of Twelve Romantic Short Stories" for free for five days.

"The e-book will be free on Amazon from Friday, February 12, until Tuesday, February 16th, at 11.59 pm, Pacific Time,” she told Tribune Woman.

"Sunbeams from The Heart" is also available on Amazon in paperback (regular and large print) and Kindle Unlimited.

Love themes in “Sunbeams from the Heart” tell of nostalgia, bright new beginnings, homecomings, second chances, and the unexpected. The stories propel the reader on a journey through Scotland, England, the Bahamas and rural America.

The Lady magazine in the UK wrote about one of the book’s short stories, “Love at Sunset”, which first appeared in their July 19, 2013 "Summer Collector's Edition", the following: “Hugely popular … Charming and surprising!”

Most of the stories in this short story collection were first published in The Lady.

"Short stories are little gems of entertainment and enlightenment that you can fit into a busy schedule," said Fay. "In addition to his best selling novels, author Stephen King has written dozens of short stories, most published in book collections. Agatha Christie also wrote many short stories as well as her famous detective novels."

An Amazon reviewer wrote about “Sunbeams from the Heart”: “While each story is unique, all share that one common thread we humans yearn for: Love….Valentine or not, ‘Sunbeams From The Heart’ is indeed a delightful read.”

Fay said: "Several readers told me they enjoyed my short story 'Love at Sunset' so much, I should make it into a novel, which I did. Later I renamed the novel “Dangerous Devotion” and it became Book 1 in my Buchanan Mystery Romance Series. Book 2 is “Deadly Deceit in Paradise”. And I am currently working on Book 3."

Fay Knowles is a Scottish-born author, who married Long Islander Erskine Knowles and settled in the Bahamas decades ago. She has been writing since the age of nine and trained in Devon, England, “from the bottom up” as a newspaper reporter. Her short stories have been published in the UK and US, her poetry in the Evergreen magazine, and her articles in British and Bahamian publications.

For more information on Fay's books, including a link to “Sunbeams from The Heart”, go to fayknowles.blogspot.com.