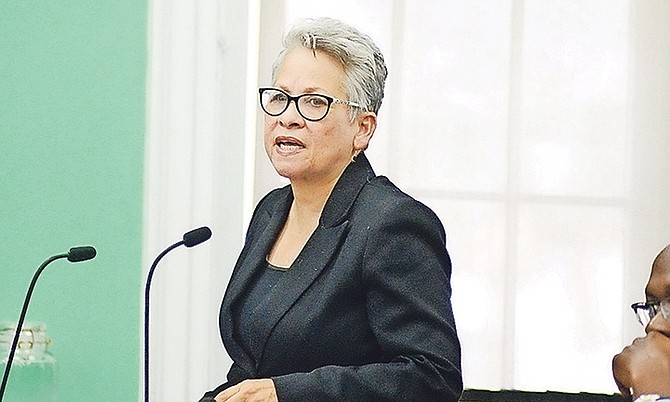 A FORMER Cabinet minister has urged Social Services Minister Frankie Campbell to move with haste to remove all those involved in the “abhorrent and cruel” beating of children at an emergency care home.

Glenys Hanna-Martin, the Progressive Liberal Party’s shadow social services minister, urged that a bi-partisan commission be appointed to formally investigate the matter and the general state of affairs at the Children’s Emergency Hostel.

The Englerston MP said the vetting, training, management oversight and monitoring of staff in all children’s care facilities should be reviewed.

Meanwhile, children’s rights attorney Tavarrie Smith said the incident was appalling, adding that a mental health professional and a forensic interviewer should have been sent to the home to provide counselling and assessments to all of the residents.

Officials were yesterday tight-lipped as to whether the workers were still employed at the hostel or remained involved with those children.

However, Mr Campbell told The Tribune yesterday he planned to give an update on the investigation into the incident tomorrow.

When contacted yesterday, police said that they did not yet have carriage over the matter.

This comes after the shocking video emerged on Tuesday showing at least 11 children being severely beaten and mocked by staff at the home. In one particularly distressing moment in the video, a boy is forcibly restrained and pinned to a table by a caretaker as he tries to resist a frenzied whipping from a large woman holding what appeared to be a stick.

Following the release of the video, Mr Campbell warned “no stone will be left unturned” in a full, impartial investigation.

Mrs Hanna-Martin said: “It is totally unacceptable that children under the watch of the state are subject to abhorrent and cruel treatment. It is heart-wrenching to watch the video that was obviously secretly obtained and made publicly available by someone equally disturbed by these actions.

“The minister must move with haste and remove all who are in any means connected to this violent response to children whose lives have already been disrupted.

“Further, we ask that a bi-partisan commission be appointed to formally look into this matter and the general state of affairs at the Children’s Emergency Hostel and further, to review the vetting, training, management oversight and monitoring of staff in all children’s care facilities.

“We must guarantee that no child placed in foster care is ever again subjected to the horrendous treatment that is seen in this deeply disturbing video.”

In a statement to The Tribune, Mr Smith said the scenes in the video reinforce what children and youth advocates have long said – that corporal punishment is a form of abuse that sends a message that violence is acceptable.

Mr Smith said: “Appalling is how I would describe the video. While we do not have all of the details, there is enough in the video for the Minister of Social Services and the administrator of the home to take immediate action. Those workers who participated in the egregious behaviour ought to have been immediately suspended pending the investigation announced by the minister. Further, a mental health professional and a forensic interviewer should have been sent forthwith to the home in order to provide counselling and assessments to all of the residents.

“The video reinforces what children’s advocates and youth workers have long known, and that is that corporal punishment is a form of abuse which sends out the wrong message that violence is socially acceptable.

In these images taken from video, a number of adults are seen hitting children with canes, including holding them down on a table to do so.

“Further, research has shown that that there is no evidence that schools or homes who use corporal punishment are any more safe or disciplined than those that don’t, the fact is the psychological affects it has on a child does more harm than good.”

Mr Smith went on to highlight Section 27 of the Residential Care Establishments Act, which outlines how people in residential care are to be treated.

Mr Smith continued: “While we are uncertain as to the date of the video, what is clear is that the video is of the Children’s Emergency Hostel, which is easily identifiable from the distinct mural on the walls. What is even more grievous is the fact that the hostel was established to provide emergency and temporary shelter for abandoned, neglected and abused children.

“While no child should be a victim to what we witnessed in the video, these children in particular are already victims of their circumstances, suffering from any number of adverse experiences and to inflict corporal punishment on top of their trauma is an abuse of the trust that the staff at the hostel held. These are the same institutions that appeal to the public for support when they are struggling to ‘stay afloat’ and then we have to discover that this is how they discipline children behind closed doors.”

He warned Mr Campbell and the home’s board of directors that they will not be able to sweep the matter under the carpet, adding that the public will be “waiting with bated breath” for the outcome of the investigation and for the appropriate punishment to be doled out.

“We want to know what is happening in all of the other homes and whether they also have surveillance systems in place so that we can monitor those in positions of trust?

“And to the public, I only wish to remind them that it is a criminal offence to not report information regarding any child who is suffering or has suffered significant harm, punishable by a fine not exceeding $5,000 or imprisonment for a term not exceeding one year,” Mr Smith said.

Representatives at the home would not comment when contacted yesterday.

Comrade Sister Glenys. this IS a police matter, so you of all House-elected MPs, shouldn't be shadowing minister Frankie.
No time wasting formal investigation is needed to tell anyone that the general state of affairs at the Children’s Emergency Hostel, should have already been placed under police criminal investigation, and all management and personnel suspended and removed from the facilities.
You are calling for the evidence to be left in the custody of those at the facility. Swoop the police in to protect the children and the evidence. Shakehead** a quick once for upyeahvote, Twice for not?

The personnel responsible for the beatings should be lined up and shot in Nassau and dumped in the sea.

Some people just talk to hear themselves. Why is Hanna-Martin even opening her mouth? The Minister already said that he has already moved on dealing with it. If the Minister doesn't do anything then speak. Guess she just trying to push herself in the spotlight.

She is merely speaking in her role as shadow minister for social services. Like a foreigner said to me, bahamians don't understand their system of government, the westminister system. All they know is PLP and FNM.

What Mrs.Hanna Martin and minister Campbell commented on, was going on for quite some time. The Bahamas has a lot of deeply rooted problems lurking below the surface.

Mrs.Hanna Martin is full of steaming horse manure and needs to PLEASE GO-AWAY and STFU! She had no problem and was totally silent when the PLP had their police goons bodyslamming and abusing Paradise Beach vendors on the PI bridge during the Paradise beach fiasco!

This woman is the poorest example of an opportunist as it gets. It is common knowledge the police routinely brutally beat, torture, and abuse people into giving confessions.

The PLP and FNM are equally guilty of fostering a culture of citizen abuse.

A few years ago there was reports circulating of a nurse at a public institution who would inject patients with drugs when they refused to quiet down or go to sleep after the lights were turned off. There were also reports that some of the orderlies at this same institution beat and otherwise manhandled the inpatients at this institution. The first response was for the institution to ban cameras and then they denied visitation to persons suspected of leaking the information. Eventually the nurse was transferred and the orderlies were retrained.