FRONT PORCH: Just look around us - if you think this is over, forget it 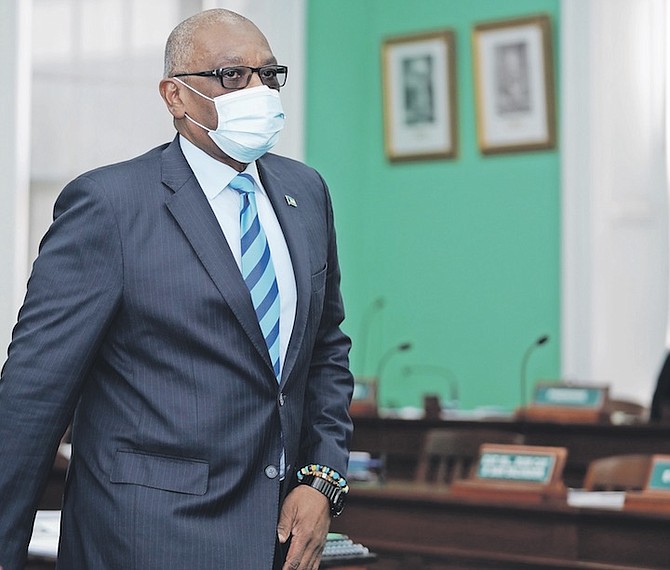 Over the course of a year plus of the global COVID-19 pandemic, there is still much that scientists and governments do not understand about the virus.

When medical experts and historians of science research and write about the virus, we may well learn a number of astounding facts and things never realized during the pandemic.

But what is abundantly clear right now is the unpredictability of the virus, which continues to mutate. The world also knows that things can change rapidly. Despite our relatively stable situation in The Bahamas and low reported active cases, within a short period we could be in a worse position.

The acute and virulent disingenuous statements by some commentators reporting on our national response during the pandemic, including the usual suspects in various media houses, continues giddily and unabated.

Most world leaders, with the reprehensible exception of right-wing Brazilian President Jair Bolsonaro and left-wing Mexican President Manuel López Obrador, have tried their best to respond to an emergency for which there is no easy how-to-do manual and requiring constant adjustments.

Then there is the cartoonish example of Donald Trump, who played endless rounds of golf during some of the most tragic days of the pandemic in the United States as he nursed his grievance on his electoral loss with fraudulent claims and as he attempted to cling to power.

Trump’s undemocratic behaviour and indifferent and disastrous response to the suffering of thousands of Americans, stood in marked contrast to more competent and effective response by a number of smaller countries and so-called banana republics

In addition to their anemic response to the pandemic, Bolsonaro, Lopez Obrador and Trump share the distinction of being cavalier about the virus, which they all contracted.

When case numbers were high in The Bahamas, some lobbed blame on Prime Minister Dr. Hubert Minnis. When case numbers dropped dramatically, some of the very same critics could not bring themselves to give him and his government much credit.

Some of those in the disingenuous circus took delight in celebrating the COVID-19 response of Barbados Prime Minister Mia Motley. A colleague noted that when he posted a story on the current uptick of cases in Barbados, requiring a lockdown, there was silence.

The rise in cases in Barbados, like other countries, is not mostly the fault of a head of government, though various policies can help to reduce or stem community spread. The virus is both highly contagious and unpredictable.

Even New Zealand, whose prime minister, Jacinda Adern, has been lionized for the response of the more geographically isolated country, continues to experience new cases. New Zealand has gone through lockdowns and restrictive measures throughout the pandemic.

But those who celebrate her efforts never suggest that she is acting dictatorially, as some have accused Dr. Minnis. One of the most asinine comments compared our emergency orders to slavery. Garden variety hypocrisy is one thing. But a forest of hypocrisy is another matter.

Some Bahamians, including those drunk with anger and personal grievances toward certain leaders, cannot admit that perhaps The Bahamas has gotten some things right during the pandemic, though we still have a long way to go and likely more rough days, weeks and months ahead.

A dear friend noted how annoyed she was at a gathering, when one of the guests suggested that she believed that the number of reported active cases seemed doctored.

The steely response of the friend: “So, you believed the numbers when they were high but not when they’re low.” She scolded that this was a dishonest and serious assertion, which suggested that experts like Dr. Merceline Dahl-Regis and others were lying to the public and officials at the World Health Organization.

Then there are the Johhny-and Jane-one-notes who uncreatively bang on about the supposed lack of transparency of the government in providing information about the pandemic, a knee-jerk disingenuous assertion of which some in the medical community take exception.

One of the more disingenuous public officials over the course of the pandemic is Opposition Leader Brave Davis, who noted in the House of Assembly yesterday that the government was not providing sufficient data and science on the pandemic to the Chamber.

Dr. Dahl-Regis and other officials have held special briefings for opposition and government leaders. Moreover, they have consistently provided the public with all manner of health data.

Most Bahamians appear to appreciate that the Prime Minister and his colleagues have done the best they could and indeed quite well, though there have been inevitable missteps. And while some may disagree with certain specific measures, most seem to appreciate the general thrust of the government’s policies to address the pandemic.

Because Mr. Davis never got his footing and remarks right during the pandemic, he has zig-zagged in his comments and prescriptions, endlessly pandering to his perception of public opinion.

By contrast, Dr. Minnis has steered a determined course. He noted in the House yesterday:

“During my training as a physician, we were taught to act to save lives, to lessen suffering and to care for the sick. When the pandemic began those lessons were paramount in my mind. My Government and I would not just say things to be popular.”

“We would not just do the popular thing to make everyone happy in the moment. We wanted to advance policies and rules to keep Bahamians healthy and alive. If at times some of these rules were unpopular, as a doctor and Prime Minister I was prepared to deliver the bitter medicine to keep our people well. …

“Our founders knew times such as these would emerge – times of true crisis and emergency that would test our resolve as a people. The Emergency measures we enacted, which we seek to extend, are legal powers designed for moments such as these.”

Writing on the CNBC website, Holly Ellyatt reports: “The new coronavirus has undergone several major mutations, and it’s likely that more, significant variations will emerge. Several variants have emerged recently, most notably in the U.K. and South Africa.” She also noted: “Japan reported a new mutation on Sunday.”

The NationNews of Barbados reported yesterday: “In declaring war on COVID-19 – and dengue to a lesser extent – Mottley also announced new measures for visitors and those coming on the Welcome Stamp.”

To appreciate the threat the virus continues to pose and the emergency measures required to address the spread, the NationNews noted the “key points” made by Prime Minister Motley:

• “Those over age 70 urged to stay at home for next three weeks.

• People dropped their guard with the use of personal protection.

• Masks should be worn at home when you have visitors.

• Launching war in communities against Covid- 19.

• From February 3 all people visiting Barbados must have a negative COVID test.

• It must be taken no more than 3 days prior to departure.

• There will be a mandatory rapid antigen test on arrival.

• Once you have a negative test, you will go to a Government authorised quarantine centre – free or paying – you have to spend minimum 5 nights before a PCR swab is taken.

• If the rapid antigen test positive, you go to Harrison Point for assessment.

• 10 samples sent to CARPHA, 3 were positive with the UK variant.

• From February 3 wearing of masks will be mandatory except for those with underlying medical issues.

• Wearing of masks in public places will be mandatory.

• Supermarkets will be opened for certain times.

• Get back to arming yourself with hand sanitisers.

• House health checks will be in effect.

• Supermarkets will open from 8 to 3 during the week, closed Saturdays and Sundays

• Care packages will be distributed next week for all people who can’t get to the supermarkets.

• Chief Compliance officers will be hired to ensure Barbadians are following the protocols.

• If you don’t need to leave home at all, don’t leave home.

• No hanging around idly; no liming.

• Shops will not be allowed to be open.

• Restaurants and gyms will be closed from February 3 to 17.”

Those who suggest that emergency measures are not needed or that Dr. Minnis is supposedly acting undemocratically might want to fully digest what is happening in our Caribbean neighbour, which has been in touch with Bahamian officials for advice on a number of COVID-related matters.

Barbados’ “national pause” is a national lockdown. Even as we pray for their success in addressing this wave, we should prepare for the next possible wave here at home.