Ingraham - Pintard Will Not Kick Anyone To The Curb 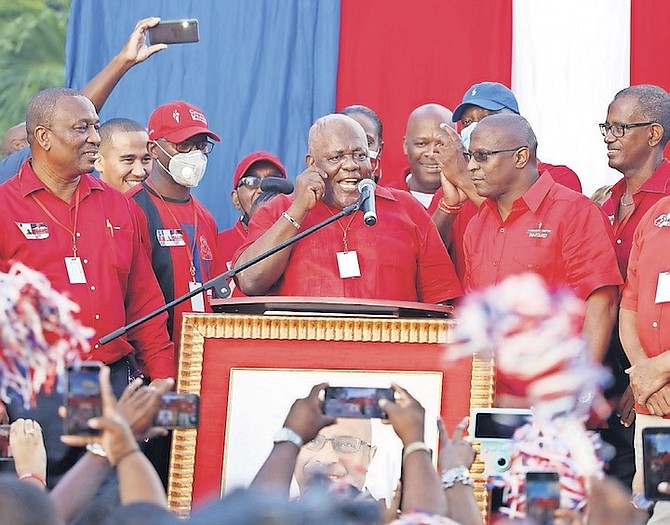 FORMER Prime Minister Hubert Ingraham said Michael Pintard represents a new kind of leader for the Free National Movement, one who will be inclusive and not exclude party supporters.

Mr Ingraham has made no secret of his strained relationship with his successor, Dr Hubert Minnis, and has suggested in the past he was sidelined under Dr Minnis’ tenure.

Asked on Saturday if the FNM will now emerge unified after Mr Pintard’s victory, he said: “It’s going to take a little while for a few, but for the vast majority we’ll be united from today onwards, but for some others it will take a little while to massage them, but Michael is the man who will do that.

“He’s able to do that kind of stuff and he’ll be collegial, he’ll be inclusive, he will reach out and he will not be someone who excludes anybody or kicks anybody to the curb. “I think that FNMs will come to accept and like that this is a new kind of leadership that we have and we’ll embrace it and go forward with it.”

He received 297 votes, while Mr Thompson and Mr Lewis got 120 and 44 votes respectively.

Dr Minnis, according to sources, backed Mr Thompson for leader. Mr Pintard and Dr Minnis have had a strained relationship, sources say, and the Killarney MP was absent during Mr Pintard’s victory speech and presentation on Saturday.

Asked if he felt slighted by this, Mr Pintard said: “Not at all. Listen, political contests are very difficult and I’m sure Dr Minnis has some legitimate reasons why he may not be here, but I expect that each time I pick up the phone to call my former leader, he is going to make himself available so that we can discuss the issues that affect the Bahamian people. I believe he loves the Bahamian people as much as any of us who are here right now so, no, I don’t feel slighted.”

Earlier on Saturday, Dr Minnis said he will remain an FNM supporter. He said he has an excellent relationship with the party.

“Whomever comes out I will support,” he said. “I’m an FNM, I’ve always been an FNM, I will remain an FNM. I think the FNM is the best government for this country and I will do all I can to ensure the FNM re-emerges even stronger, better and projects the country in the direction where it belongs.”

Mr Ingraham, meanwhile, said he will give advice to Mr Pintard, but will not be pushy.

“The party needed a change and many of us worked hard behind the scenes to effect that change,” Mr Ingraham said.

“We think Michael will do well. We will give him all the support he needs and go with him throughout The Bahamas when he needs us to go, speak for him, but stay in the background, be advisors, not seek to guide him, not seek to lead him, just simply give him as much information and support as we can at any time. We will not be pushy. We’ll just be here, available, speed dial.

“As the longest serving leader of the Free National Movement in its 50-year history, having served for 19 years as leader of this party, having led this party to three victories as government of The Bahamas, I stand here today to say how pleased I am that the party has nominated, elected and ratified Michael Pintard as our next leader. I want you to know that he has my support, he can call up on me anytime, anywhere, any day. Go for it, Michael.”

Ingraham, Christie, and Minnis need to retire not only from politics, but also from public appearances.....their eras are over, but they just hang on to create havoc and division and drama.

Pintard would be wise to kick the likes of dinosaur Ingraham, useless Tommy 'T' and worthless Dion Foulkes to the curb. Pintard must make it a point to keep his distance from all the visionless deadbeats of the past who have practically destroyed the FNM Party. There should be no front seats for any of them in a Pintard led FNM Party and the sooner Pintard makes that clear to them, the better.

Open the link below for a trip down memory lane about Pintard and Minnis's relationship with the well known criminal thugs Toggie and Bobo. LOL

It's inevitable that there will be casualties in politics..... Regardless of how well meaning a leader is. That leader has generals, who have agendas against others.

HEADS WILL FALL. . .OR THE FNM PARTY WILL BE THE PARTY OF CHAOS!! This man is already telling dumb lies them!! No human leader CAN EVER MANAGE any group without "chappin off" some heads them!!

Check the FNM history. BTC their Papa. offshore banks their papa. OBAN their doc. Lighthouse point their doc. Post office their doc. our Lucaya and others facts that this post can not contain.l

The FNM part has never been the Party for the less fortunate, What have they really done to advance the poor.

What is going on between the doc and papa? is it because the doc said the Papa era is over.

, there is no love lost between the two But at the end of the day, the papa and the doc are very much alike. mean spirited and full of themselves.

You forgot Baha Mar and its bigtime quid pro quo beneficiaries for doing Communist China's bidding, namely Perry "Vomit" Christie; Maynard-Gibson a/k/a Wicked Witch of the West; Bagman Bethel; etc. And then there were all those corrupt deals involving the very crooked and shameless Shane Gibson; and so on, and so on, and so on.

If youse is listening live to the Guardian's Z Live. Off the Record's Zhivargo Laing's coaching his listeners' on how's to govern, youse have to naively forgot, this is same Zhivargo who Papa Hubert had to move from constituency to constituency, and also that em's was at the center of controversy that contributed his not only loosing his own House seat, and resulted in the brungin' down of Papa Hubert's red regime and everything else like...Didn't Zhivargo, also promise his listeners' that he'd share his secret envelope, containing his Sept 27, 2021 general election results.
Listeners', is you still in a place where I need to repeat settin' straight the true political track record Zhivargo Laing ― Yes?

So says Tal the chief listener of the lame-brained talking heads on radio. LMAO

____ Livestreaming Pride of Nationhood: Declaration of the Republic and Installation of the President of Barbados -----

Papa is great. And y'all standing too close to him with your COVID carrying fingers and breathing appendages Protect Papa. I wonder what his security detail code name is? Phoenix?