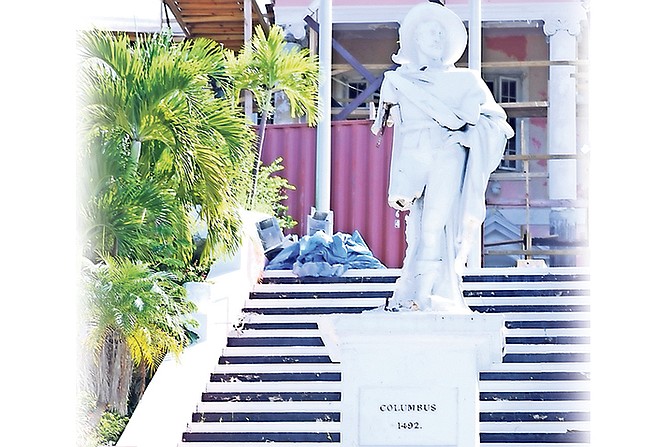 A 37-year-old man accused of trespassing on Government House property and partially damaging a Christopher Columbus statue has been remanded pending a psychiatric evaluation.

Shervandaze Smith appeared before Chief Magistrate Joyann Ferguson-Pratt charged with causing $2,000 worth of damage to the monument. The statue’s right leg was destroyed with a sledgehammer on October 9.

Police were dispatched to the scene around 1.20pm. When they arrived, they arrested a man who they said was caught in the act of damaging the statue.

Yesterday, it appeared Smith was willing to enter a plea to the damage and trespassing charges. However, his mother, who was present during the hearing, asked the court if her son could be evaluated as he had been acting strangely for a while and his family was concerned about his behaviour.

Smith also went on a rant in the courtroom, stating that he was operating under a divine purpose after he had an encounter with God and even alluded to conversations he allegedly had with the late Dr Myles Munroe years ago concerning finding his purpose.

Afterwards, Magistrate Ferguson-Pratt said she was going to “err on the side of caution” as she was concerned that Smith may not be a “mentally competent person.”

She said she had to satisfy herself with that information before she accepted his plea because she was “concerned for his personal welfare as well as the welfare of others.”

As a result, she adjourned his case to November 15 and remanded him to the Bahamas Department of Correctional Services (BDCS) for a psychiatric evaluation.

Magistrate Ferguson-Pratt explained that Smith would be held at the prison because the Sandilands Rehabilitation Centre had no more space. Nonetheless, she said she would make checks for any availability and if there were none, write a letter asking for Smith’s evaluation to be expedited while he is at BDCS.

Yesterday, Smith was given an opportunity to speak with his mother before he was taken into custody.

However, he told the magistrate he had “nothing to say” to her because she tried to make him look like he was crazy on multiple occasions.

Magistrate Ferguson-Pratt may as well order all Bahamian adults under-go a psychiatric evaluation because those of us who weren't driven crazy by Minnis will surely be made nutzoid by Davis.

$2,000 damage to repair is a really good price. I was expecting restoration to cost much more considering you have to match the art style of the existing statue.

Who wouldn't says, — Best redirect away from performing psychiatric testing on the man's who carried-out a double amputation of Columbus limbs and everything like that over for testing we politicians, — Yes?

What the gentleman did to the statue was a partial correction of what the true design should be. When you look at the wretchedness wrought by this Don Cristobal Colon aka Columbus on our people you will undoubtedly see he has no legs to stand on.

And Minnis fully agrees with you. LMAO

I assume by your use of the term Dom Christobal Colon that you are familiar witht the historical information!! Therefore, I would like to ask you: "what did Colon do to the Bahamas. . .beside gave it a name"! Histrotical information don't even support our position on his discovery of San Salvadore!! His documentations in Portugal only discribe the island he first landed on as a land of "mucho aguas". . .which traced more to Cat Island rather than San Salvadore. Also, that he straight way left these waters for lands further south and never returned here!! Next stop, La navidad. . .return to Spain and back again!! The things done to Indians were done by subsequent Spanish Noblemen. . .some of which he hung. . .later he was taken back to Spain "in chains" for "trying" to keep the noblemen "in check"!

I am listening to the Bahamian public speak out about this case and the amount of incorrect historical information is astounding to say the least!

This is the reason I am responding to your post. . .you seem to have some historical information rather than "street talk" about the man!