MY entire family, at one point or another, went to the same nursery. It was our first of many centres of matriculation but while there, we were never exposed to typical scholastic pursuits. In fact, to the best of my recollection, we never once learned anything about the alphabet, colours, numbers or writing.

Looking back with eyes that have become wiser with time I recognise that the reason for that was because the owner felt we would have the rest of our lives to learn such things so what she taught us instead was how to be good human beings. We learned the importance of sharing and eating a hot meal, playing with friends and exercise, the need to rest when appropriate, how to listen and behave and the benefits of traditional and bush medicine. I have no idea if she intentionally sought to instill these values or if it was consequentially transferred due to repeated direct exposure, but to this day we still collectively feel it was the most magical place on earth. But for all of its glory and resplendence, it was also the place I first learned about death.

A six-month baby girl that was there during my tenure grew particularly attached to me. Whenever she heard my voice she’d lift her head and try desperately to get my attention to pick her up. She’d grunt and giggle and motion her hand as best she could eventually positioning her legs in an always unsuccessful attempt to walk. I was ten or 11 at the time and even then completely powerless to the charms of a woman. And so as requested, I’d pick her up each day, get my sister’s vintage green and yellow music toy that played the ‘Twinkle, twinkle little star’ lullaby and she’d smile and laugh until she fell asleep. 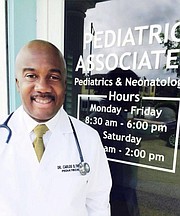 DR Carlos Thomas is a world-class paediatrician and neonatologist.

Unfortunately, one afternoon near the end of the week that beautiful baby girl tragically died in her sleep from SIDS (sudden infant death syndrome). All of the kids were moved to the back patio as the ambulance arrived but I managed to slip through and watched as she was taken away. The next time I would be in her presence was at her funeral when just two men lifted her pink coffin past me at the graveyard.

I went with my Aunt Alice and it was the first of many things that she and I would do together. My aunt didn’t know the baby’s mother but she cried that day because it was a pain that every mother could understand. Without that experience I may not have been able to emphasise as deeply as I have with the patient discussed in this week’s report.

Now in her late 30s, this week’s patient is more than any other I have ever treated, filled to capacity with the gentle compassion of a mother. She is a kind-hearted and generous soul whom herself desired to become a mother from she was a young girl playing with her many beloved doll children.

Immediately after getting married she and her husband started trying to have a baby. On their one year anniversary she became pregnant but ten weeks later while at work she suffered a miscarriage. She and her husband were shattered, but opted to try again and didn’t get pregnant until two years later. This time her pregnancy initially thrived and they found out that they would have a boy. They decided to name him after his father.

At six months and five days, in the middle of the night, she felt a sharp, popping sensation and a gush of warm fluid in her lower abdominal and vaginal regions. She quickly realised that the amniotic sac surrounding her baby had ruptured and she was in early labour. She was immediately rushed to the hospital and doctors did as much as they could to delay the birth. After nine tumultuous days their son was born but was taken to the neonatal ICU weighing barely one pound. They were advised that he would most likely grow up to have multiple disabilities but the struggle to breathe proved to be a challenge too onerous for his small lungs. Five days later he died.

Shortly thereafter she became pregnant but once again miscarried some ten weeks later. Five years after initially trying to conceive she became pregnant for the fourth time. She delivered a healthy baby girl, eight months into her pregnancy. It was the happiest day of her life and I can attest to the fact that this miracle baby, now eight-years-old, is doing exceptionally well. She loves to dance, participate in all church activities and is already interested in politics.

Hoping to finally complete their family circle they tried to conceive once again and six years after the birth of their daughter my patient became pregnant with another boy. Nine months into her pregnancy she delivered but her son had a heart defect and required major surgery immediately. Unfortunately he did not survive and for the first time she and her husband had to explain and share this loss with their daughter. In total she had five pregnancies and suffered two miscarriages and the death of two sons, which would have made anyone bitter but my patient has made peace with her struggles. There is an old Baptist saying that crying may endure through the night but joy always cometh in the morning. Driven by a strong faith in God and the love and support of her church, family and close friends she mourns the loss of her children but is grateful for her blessings. She specifically wanted to share her story in hopes that it can inspire compassion and awareness throughout our country for all those who suffer in silence. She also hopes that any mother that has or will have to endure a similar situation will be able to make peace with what has happened and to rely on God and friends for support.

Dr Carlos Thomas is a fantastic, world-class paediatrician and neonatologist who’s had to counsel many men and women facing such difficulties. He states that women who lose a child via miscarriage, still birth or neonatal deaths erroneously experience extreme feelings of anguish, shame and guilt. He recommends that women start getting regular check-ups with their ob/gyn and start appropriate pre-natal care immediately once pregnant, but even in doing so there are things that can happen beyond your control and no one is to blame. He further encourages any family facing this kind of loss to speak to someone because you are not alone and eventually things will get better.

“Twinkle, twinkle little star’’ was written by the British Poet Jane Taylor in 1806, eighteen years before she died from breast cancer at the age of 40. I doubt she ever dreamed that nearly 200 years later, on an island far away, that same lullaby would bring comfort to a baby during her last few weeks of life. I likewise hope that the stories I share in these weekly reports can help others in a similar life altering or, in the very least, life-reaffirming fashion.

This is the KDK report.

• Nicknamed ‘The Prince of Podiatry’, Dr Kenneth D Kemp is the founder and medical director of Bahamas Foot and Ankle located in Caves Village, Western New Providence. He served as the deputy chairman for the Health Council for five years and he currently sits on the board of directors for the Princess Margaret Hospital Foundation in his role as co-vice-chairman. He is the recipient of over 15 global awards and certifications and has treated royalty, billionaires, celebrities, Oscar-winning actors, Grammy winning singers, world-renowned super models, professional athletes, ambassadors and both local and international politicians.

Thank you, Dr. Kemp, for this sensitive, compassionate and inspirational article. I think it will bring comfort and hope to many who have gone through the tragedy of losing a child during or after a pregnancy.