Bahamasair Off 35% Against Pre-Covid 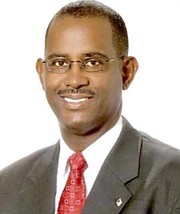 Bahamasair’s peak summer revenues were down by 35 percent compared to pre-COVID19 figures, its chairman has revealed, although passenger occupancy on its US routes averaged around 80 percent.

Tommy Turnquest told Tribune Business that while the national carrier’s US load factors had benefited from Royal Caribbean’s and Crystal Cruises’ decision to home port in Nassau, monthly revenues for July and August 2021 were $5m-$6m compared to the same period in 2019.

“We give thanks for that because we’re still in the middle of a pandemic. We give thanks that we’re able to do what we did. Again, the home porting showed a good sign in terms of our Miami, Fort Lauderdale and Orlando routes. Those load factors were around 80 percent average.

“Some flights were chock a block for those routes. Marsh Harbour to West Palm Beach was also quite good. That’s starting to come back as well. June, July and August, November and December, and whichever month Easter falls into is when we make it.”

The summer features increased travel by Bahamians for vacation and back-to-school, while the other two periods are boosted by holiday travel. However, with revenues just over one-third below pre-COVID comparisons, it remains clear that Bahamasair continues to incur multi-million losses although the scale will have narrowed somewhat compared to 2020 when it was shut down for much of the year.

Turning to the national flag carrier’s inter-island domestic routes, Mr Turnquest said: “July and August were quite good. For August, the numbers [passenger load factors] on all our routes are over 50 percent with the exception of San Salvador, which was around 40-45 percent.”

He added, though, that COVID-19 border controls continue to prevent Bahamasair from flying to Haiti while it remains restricted to just one flight to Cuba every two weeks compared to the six weekly flights it was running between Holguin, Havana and Santa Clara prior to the pandemic. The Bahamas’ own emergency orders prevent flights to Haiti.

Tracy Cooper, Bahamasair’s managing director, told Tribune Business that the loss of Cuba and Haiti was having “a significant impact” on Bahamasair’s business because both had been among its highest-yielding markets pre-COVID.

“Those have had a significant impact on the airline. We understand in both cases those are border protocols, which we saw in 2020 across all locations,” he explained. “Cuba and Haiti are higher yielding markets, and that has contributed to what we’re seeing, with numbers at 65 percent compared to 2019. Cuba and Haiti have had some impact to the financial position.”

Mr Cooper confirmed that passenger load factors on inter-island domestic routes had been in the high 40 percent to 50 percent range over summer 2021, but added that the national flag carrier would typically have expected these to be in the 70 percent range for this time of year pre-COVID.

“So we’ve seen a fall-off in the domestic market but that’s to be expected because domestic travel costs are a bit higher and COVID concerns among many Bahamians are pretty prominent,” he said. “Overall we did relatively well; a little bit better than expected.

“One of the driving factors was the home porting from Royal Caribbean and Crystal Cruises. We got a share of that, and bringing cruise passengers over was a four-day flow - both before and after. The cruise ships brought in thousands of persons, and what we saw was persons both came in beforehand and stayed after to enjoy The Bahamas.

“We were completely shut down for most of last year, so anything happening this year is an improvement. We’re definitely seeing better financial results year-over-year, but that is to be expected.” Mr Cooper said the traditional post-summer drop-off in the airline’s passenger load factors was now expected, especially given ongoing COVID uncertainty and the end to Royal Caribbean’s home porting, but he voiced optimism that the 2022 winter holiday season would produce its normal rebound.

The Free National Movement’s (FNM) general election manifesto has pledged to re-focus Bahamasair on international markets, opening new routes and bringing tourists to this nation if it is returned to office.

“Bahamasair will expand the delivery of visitors to The Bahamas from more overseas markets and become more directly integrated with Bahamas-based private carriers to enable easier reservations and connections for both resident and international travellers. This is critically important for those travellers wishing to make a quick getaway to more destinations in the Islands of The Bahamas,” the FNM said.

“The Government will continue to work for the ongoing transformation of Bahamasair to suit the needs of Bahamians and visitors, and for the airline to take advantage of new trends and needs in domestic and international aviation.”

Bahamasair has long been a drain on the Public Treasury, sparking arguments between those who insist it should either be restructured to make it profitable or privatised, and others who insist it provides a vital transportation and commercial link for sparsely populated Family Islands that would not survive without it, and that subsidies are necessary to cover loss-making routes that would never be serviced by private carriers.

Dionisio D’Aguilar, minister of tourism and aviation, disclosed in his June Budget debate contribution in the House of Assembly that Bahamasair’s revenues for the ten months to end-April 2021 plunged by 84 percent year-over-year with taxpayers set to underwrite its survival via a $60m-plus subsidy.

“To say that fiscal 2020-2021 was a challenging year would be an understatement,” he admitted. “There was great hope for Bahamasair as the company saw its revenues for the fiscal year 2019 climb to $92m, with revenues forecast to exceed the $100m mark for the first time ever in 2020.

As a result, Bahamasair’s need for financial subsidies had risen to an unsustainable level during the current fiscal year. “Bahamasair, as a state-owned enterprise (SEO), has proven a continual drain on the country’s finances. During the fiscal year 2020-2021, to-date Bahamasair would have received a subvention of $60m-plus. This has been to both support operations and the retention of employees.

“In this upcoming budget cycle, fiscal year 2021-2022, the Government is allocating $30m to Bahamasair. This is due to prolonged suppressed operations resulting from COVID-19. However, we are specific in how this support should be used.

“Twenty million dollars will be used to fund the ATR loan structure, and the remaining $10m will assist with operational support for the Family Islands. The Government understands that the airline will not fully recover from the effects of the pandemic until there is a complete return to Bahamasair’s full schedule complement of flights.”

Trying to book an online roundtrip flight to Exuma with Bahamasair since yesterday, and I keep getting this message:

"Error: Server Error The server encountered a temporary error and could not complete your request. Please try again in 30 seconds."

I guess I will be flying Western Air...

Yep .Booked a flight to ABACO.. site slow as frozen mollasses. Promo at beginning said 2 free bags for Septemeber per person. Buy the ticket process to add 1 over the 1 free one offered there was an additional 45.00 to pay. Then to finalize everythiung in the end, had to click that I accept all the rules and conditions. However, that infomation is not available to review. Then the costt for 2 round trip non refund tickets was almost 500.00. So, how does this airline not make money with those rates for a 1/2 hour flight in each direction?

Must be annex to BOB!