ELECTION DAY – As it happened 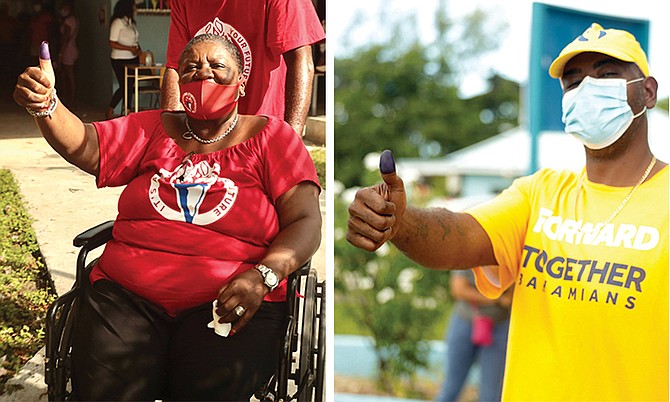 • LIVE COVERAGE OF THE GENERAL ELECTION RESULTS CAN BE FOUND HERE

1.55pm: The Progressive Liberal Party said an issue with a ballot was raised at a Yamacraw polling station and it is seeking to have the matter addressed.

“Please note that in Yamacraw a voter was given a ballot with a mark on it,” the PLP said. “The voter noticed the mark and asked for another ballot. The legal team is having voting suspended to have all ballots checked.” 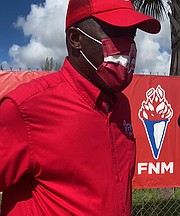 Both candidates were at Aquinas College on Gladstone Road where scores of voters trickled into vote for their pick.

“From what I’m seeing today I think Tall Pines is going to be back in the column for the Free National Movement,” Mr Saunders said.

He said he was pleased with the way the voting process unfolded today.

“…The day is a 300,000 degree turn from what we experienced last week,” he said. "I think persons came early as expected.

“Protocol in my view is being adhered to. Persons were very organised and orderly and I want to congratulate Bahamians for continuing to exercise their constitutional right and doing it in a decent way.”

When he spoke to reporters, Dr Darville said he thought the process had gone well.

“Early this morning we had a little backlog but now it's really moving smoothly. So, for those individuals who are voting in Tall Pines the Aquinas College now is set and we encourage everyone to come out.

“I’m very pleased that things are going quite well.”

12.20pm: PLP Leader ​Philip 'Brave' Davis on the ground in San Salvador. (Photos by the PLP)

12.00pm: A sign listing Tall Pines polling divisions to assist in the smooth flow of voters. 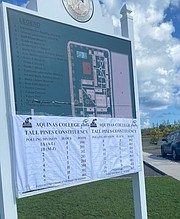 11.25am: Voters queue at Polling Division 9 at Freeport Primary School. The voter traffic has been moderate there. The lines at the other polling divisions 7, 12 and 11 has been slow. 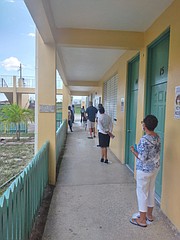 11.15am: More on that row at Government High School earlier this morning after Mount Moriah incumbent Marvin Dames accused Progressive Liberal Party supporters of campaigning at the polling site on Election Day.

In an interview with The Tribune, National Security Minister Marvin Dames called the move "unacceptable", warning that campaigning is over and now is the time for the Bahamians to make their choice – full story HERE.

11.00am: A voter at HO NASH talking about the voting process and how it could have gone smoother.

10.50am: Stalls set up outside Gerald Cash Primary School where there are several polling divisions for the Carmichael constituency.

10.35am: Voters at the St Andrew's School Polling division. 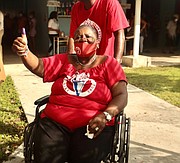 10.20am: THE country’s curfew has been pushed back until 11.59pm today, according to the latest Emergency Powers Order signed by Prime Minister Dr Hubert Minnis.

The notice came as thousands of Bahamians head to the polls to vote on Election Day.

“Notwithstanding any other order imposing a curfew, on Thursday the 16 of September, the curfew shall start at 11.59pm and continue until 5am the next morning in every island which has a curfew imposed.”

The normal curfew will resume on Friday, the order states.

10.00am: There was a heated exchange in Mount Moriah after the area's MP and Minister of National Security Marvin Dames accused Keod Smith – a former Mount Moriah MP – of campaigning.

9.45am: Scenes in the Killarney constituency on election morning. 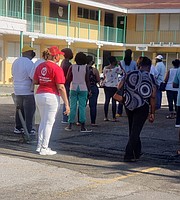 9.40am: Dr David Allen at H O Nash School where he voted. As a senior citizen he said he was pleased with the process.

9.35am: People waiting at classrooms to vote at St Andrews International School - polling station for Yamacraw.

9.25am: Video showing a police inspector speaking to the crowd earlier this morning to ensure voters are aware of the correct polling station.

9.15am: This video shows crowds outside a polling station in Fox Hill. People are congregated outside because guards are ensuring that only 20 people are allowed on the grounds at a time. PLP Chairman and candidate Fred Mitchell said: “I’m pleased at the turnout. Looks like people aren’t suppressed because of the COVID regs. I haven’t gone to the other stations but it seems most people are satisfied that the station started on time.”

9.10am: Voting in the General Election is underway – we'll keep you up-to-date throughout the day as The Bahamas goes to the polls.

Looking at this line gives.me the idea that the.government shokld have made the election a two day process , so there would be.no rush. They could have down ladt names A through k will vote today , and whatever letter comes after.K through z votes tomorrow. This line will take all day. I can hear.the.complaints already.

What if you don't know what's after K and you show up on the wrong day? All the days end in Y so it can be a challenge. LOL

Anxious see if at clock's striking.— precisely at the audible gong's eight o'clock hour. — if the election's final results will be — credibly predictably?
My laser focus, shall be glued to which way Abaco, Grand Bahama, Montagu, South Beach, and, the big banana, — Killarney, — the majority of voters, — do swings, — Yes?

Luckily we got a 2nd chance on this.

Unfortunately not all crises will allow you the opportunity. We need a comprehensive review of every individual in these key positions everywhere to ensure they are qualified for the job and competent. Lives are literally at risk. Crises dont happen often but when they do the stakes are high, you need people who can think quickly, understand the regular procedures well and can adjust them to make the situation on the ground make sense. You absolutely cannot have people like Marvin Dames and Renward Wells who are always willing to say a complete mess is excellent performance.

Its why experience is so important. Not everything is the realm of the young. Over all those years youve gotten a deep understanding of the operation, witnessed various incidents and responses and did your post assessments on what could have been done better and what definitely does not work. You bring all of that knowledge to those situations you've "never seen before".

"Never seen before" CANNOT be the excuse for a leader's failings

Davis , grimes , and sands do not look like they are 6 feet apart in this photo

COVID can't touch them, they're special!!

This polling process is very easy. . .no hang-ups!! Bing-bang. . .in and out, no sweat!! I think the separations of senior citizens may have helpp some. . .in and out like a breeze!!

People are for the most part een wearing party colors. . .mostly PLP them wearing their yellow. . .but them other folks een checking for no colors!! The last two elections I saw this kind of "focused" polling. . .one party was in for a serious cut hip!! One party got 8 seats and the other time the other party got 4 seats!! The only people you can identify are PLP generally, , ,few FNM and othe parties!! This one ger be the boom. . .them Bahamians are on a mission!!

"300,000 degree turn" What does that even mean? These politicians really don't care. Just tell us peasants spectacular and entertaining things to get voted in. Not saying anything of substance. It's disgusting.

Lincoln has all substance. Plans clear in video and text on the website. CoalitionOfIndependents.com

2021 Election Update: — Da Guardian's, Comrade Talkie Show Host, is so avoiding anything/anyone, wantin' engage him in politics/transvestites.
— Em's, given switch gears over to talking about the —Crazy Hill, Lepers, and Exposing Ya Penis.— pretty much anything, — so as not to displease the Reds, just in case his idol, Sea Breeze's Jeff, and his band Reds pull off a majority government win. Such silence — not a single one the Guardian's other talkies, have not gone into voluntarily blackout quarantine over, — Yes?

And in the midst of all this....13 covid deaths reported today

Why do I always get people standing next to me who doesn’t want to keep the bare minimum of three feet? If you don’t know what tree feet is, the average Bahamian has a size ten foot. So if you put one foot of the other one three times. That is roughly the minimum you should come close to a person. But for safety it should be six feet or twice that distance. And if you can stretch your hand out and touch the person, you and them are definitely too close.

But the voting process seems to be peaceful and orderly. And moving more smoothly than the early polls. Since the voter’s register is now permanent, hopefully by next election there will be smart voter’s cards that are machine readable that will record when you vote and other relevant information.

I voted around 2:30 and thankfully my polling division was completely empty!

Typical. . .early morning and late evening are ya kickers them!! Mid day they usually come in one-one!

15 minutes and it is history!!! Good sailing to both of the major parties!!! To you all who were honest with us around and to you all who were just ninnies in how you used your thinking. . .those in the PLP and those from the FNM. . ."IT OWA"! The people have spoken. . .whatever it be!!

In the morning we will have Prime Minister Minnis or Davis!!