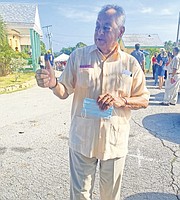 FORMER Exuma MP George Smith is in hospital after falling ill while campaigning for the Progressive Liberal Party last week.

Mr Smith released a statement yesterday in response to concerns about his well-being after the incident. The former Pindling-era Cabinet minister said he was in Exuma early last week campaigning for Deputy Prime Minister Chester Cooper, who represents the area, when he became ill.

“After visiting friends and voters on Monday and Tuesday, I became quite ill,” Mr Smith said.

“I had planned to visit the Exuma Cays on Wednesday and spend the night at Black Point. “My friend, Daniel Strachan, became concerned for the safety of my health and took me to the hospital in Georgetown where I was attended by the attending physician Dr Lakeisha Pinder. Dr Pinder considered it best that I should be airlifted to Nassau for treatment at the Princess Margaret Hospital.

“The caring doctors, nurses and support staff at the Princess Margaret Hospital provided excellent, attentive, and very kind treatment. May God continue to bless and care for them as they care for all our people.

“I am also most grateful for the concern and affection I received from family and friends. May God richly bless them all.”

Mr Smith said he is “on the mend” and looking forward to a trip to Exuma to celebrate the PLP’s victory.

On the mend from what....heart, stroke, covid? Asking for a friend.