Mitchell: Political Appointees Have Been Asked For Resignations 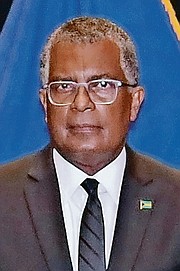 FOREIGN Affairs and Public Service Minister Fred Mitchell yesterday said all political appointees were recently asked to submit resignations as a matter of routine with the Davis administration’s election to government.

Mr Mitchell was contacted to respond to a voice note circulating claiming that up to 15 people at the Office of the Prime Minister were told to go home this week.

It was further alleged that their contracts were not being honoured, but that they were given one month’s salary instead.

Mr Mitchell said while he was not familiar with what took place at the Office of the Prime Minister, he suspected that whatever happened was routine.

“That’s the way the system is, and I suspect that that’s what is at work as you report at the OPM.”

He continued: “They (the former administration) did the same thing, so I am not sure. I am not using that as a defence, but that’s just the system and, for example, the most obvious example would be the Foreign Ministry.

“All political level appointments like consulate and special contracts have been asked to submit their resignations to the permanent secretary. That is a matter of routine, and the prime minister decides whether or not to accept the resignation or to allow them to continue.

“That’s the way it works so we have them all in the Foreign Ministry at the moment with the exception of one, the other one is outstanding as well.”

Crown Minister Comrade Fred Mitchel, sign search spotlight on the list names 1200 Minnis made election vote-buying permanent government workers. A list, which Red House MPs, had a lot say over who got or didn't get government selected, — Yes?

Amazing the spin that is put on it. When the FNM did what he is talking about he called it victimization. When his party, the PLP, dos it, oh it is the thing to do.

Is this the unity the PM talking about

These two positions being held by the same person makes no sense. One is foreign to the other. Each position requires a separate Minister.

and Minnis would not put in place the anti-political workplace discrimination law.

Im not sure which planet you guys live on, but this is common place in just about every country. When the administration changes, so do the political appointees. Nothing to see here.

Geesus, what a lot of bafoons, what about all of the severances that will be paid ?

And just think how many of them have probably been getting a severence package every other 5 years for the last 25 years as taxpayers have suffered the financial devastation of alternating PLP and FNM administrations that undo whatever little good the previous administration may have done with no focus on the continuity of anything but their own corrupt activities.

The 5 year cycle of political appointees being based on party loyalty and not capability gets us stuck in this constant re-invention of the wheel. Is the DRA finished? No mention. Have those political appointees been fired? What of funds recently donated and earmarked for specific jobs? What of funds owed to vendors?
Will this need be abandoned or passed on to some appointee that knows nothing? Just one example of our lack of continuity. Will the dome homes be finished, or are they abandoned? At what cost? Perhaps Mr. Mitchell does not see the obvious systemic problem in his perspective and statement.

Persons holding political level appointments must tender their resignation? Why would this be? Conflict of interest and loyalty much? Hmmm…me thinks not pledging allegiance to HRH the Queen along with all the other Ministers is the same thing…?

Has Her Majesty's representative also been asked to resign? Who will replace him? Frankie?

This minister will "cause" some trouble. . .he is being as mean as he always was!! Well. . .if PM Davis will allow Mitchell to "shank" him politically, have at it!!