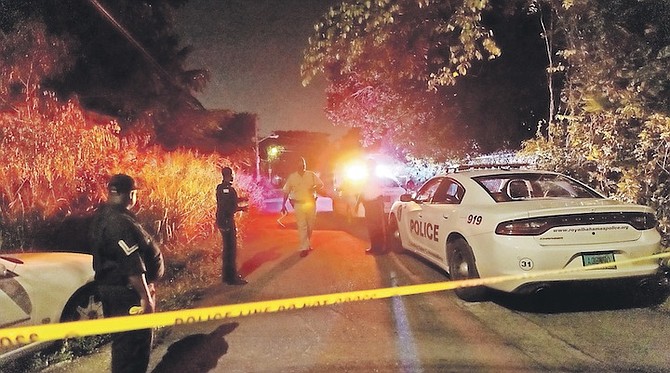 POLICE at the scene of the a shooting in Fleming Street in which four-year-old Kenton Seymour Jr was killed. Photo: Austin Fernander

AMID the surge in violent crime and gang retaliation, some Bahamians suggest law-abiding citizens need not worry that gang members are killing each other. The argument is the former are doing the country and the police a favour.

This is a dangerous, superficial and unethical argument. It is a part of a Wild West mentality where such violence may become normalised. We can easily become immune to the suffering of others when we are not directly affected.

How would those who argue such a viewpoint feel if they or a member of their family was struck or killed in the crossfire of a gangland retaliation?

The recent death of four-year-old Kenton Seymour Jr demonstrated just how base is the suggestion that gangs are doing the residents of New Providence a favour by engaging in retaliatory violence that might do great damage to innocents.

The toddler, Kenton, was headed out for ice cream with his parents in the heat of summer, a treat beloved by children and adults. The car he was in was struck by a stray bullet. A child who barely knew life lost his.

One of the unstated premises of the “let them kill each other” argument is that such violence occurs mostly among a supposed lower economic class, with their lives worth less than those who are comfortably middle class or wealthy.

In our highly performative Christian nation, where we clutch our Bibles with fervour, and often view the Creator as merciless, draconian and retributive, some may believe gang members are unworthy of God’s redemptive grace and our humanity.

There are those who require incarceration, including long-term. But a young man who becomes immersed in a gang culture comes from a familial and social context. Such a young man is not simplistically “a bad boy”.

There is more to his story and to the broader narrative of social dysfunction in the urban culture of New Providence and other high crime jurisdictions in the region where guns are ubiquitous and hope for a better future often scant.

There continues to be considerable angst and heated discussion of the causes and responses to violent crime in a modern Bahamas besieged by high levels of violence and anti-social behaviour and various crises of social culture.

Much of the crime commentary is trite with endless clichés and vague notions of crime abatement.

Some are wedded to a boot camp mentality while others believe hectoring and preaching loudly is a serious crime prevention strategy. The Christian Council’s ritual exhortations on crime often seem unimaginative.

Even as governments have rightly allocated more resources to the courts, the police and related measures, still underfunded are broader-scale social interventions which have been shown to reduce crime in the medium- and longer-term.

The most successful social intervention programmes involve intense efforts to redirect, mitigate or change the habits and mindsets of those who may be disposed to or become involved with criminal conduct because of various circumstances.

Many of those who are inalterably criminally-minded will not be deterred except by good policing and/or incarceration. But there are many others internationally whose lives have been transformed by initiatives not yet seriously tried in The Bahamas.

Over the years, various youth programmes have been discussed but never implemented. These include the Upward Bound programme, which has proven highly successful in other countries and recalled in several columns.

The Summer School for Boys, a programme based on the successful Afro Reggae youth initiative in Brazil, a Youth Development Centre, among others have been recommended in this column and by others.

Collectively, such initiatives may prove comprehensive and far-reaching. What these programmes have in common is helping to directly address the habits and behaviour of those who commit the overwhelming majority of crime: young men.

Social and cultural change, for good or ill, concern habits and patterns of behaviour which flow from value sets. Gang members and members of the Boy Scouts both have sets of values, rites of passage, rituals, norms, shared objectives and an esprit de corps.

So what makes for the differences between a potential boy scout and the member of a criminal gang?

We are creatures of habit, and at the heart of our culture of violent crime are various crises of culture fuelling, reinforcing and arming mostly young men in a conveyor belt of successive cohorts ready to take up the drug trade, gang membership and weapons for many years to come.

Cultural habits and practices showcase the lived values of a given society. The mouthing of values is not the same as adhering to them. While we adhere to the concept of monogamy in law and in Christian rituals, sociologically, we are a de facto polygamous society.

While clerics will judge the morality of such a discrepancy between words and practices, the sociologist is more interested in understanding the social realities and habits involved in such a gap, or chasm, depending on the society.

There are positive and negative social mores and norms, the study and analyses of which are critical in areas ranging from public health to marketing products to addressing criminal behaviour.

To better understand the sociology as well as the social psychology of crime in the modern Bahamas is to appreciate our social habits and cultural patterns. Also, there are certain relatively recent crises of culture helping to fuel violent crime. These crises include the emergence of the drug and gangland culture of the 1970s and 1980s.

Human habits are a complex matter, rooted in a collaboration of biology and moral imagination. 12-Step programmes speak to this collaboration and what it takes to arrest addictions and reform habits. Virtues and vices are essentially habits.

In our behaviour in public spaces and public gatherings, we often exhibit a culture of entitlement and slackness sometimes accompanied by rudeness and disrespect for authority.

Consider the foul mouths and vulgar cursing by many school kids in public with easy references to the genitalia of another’s mother, and language many adults would never utter. Whereof were such habits formed?

Consider also the shameless ease with which some Bahamians invade the private spaces of others. A friend recalls how a patron of an after-hours club illegally dismantled the chain to her property in order to park.

For decades, many straw vendors refused to pay certain fees, contributing to the Straw Market becoming run down and derelict, while gleefully selling counterfeit goods, even while clinging to a Bible. Why such poor public habits?

And yet, why have we historically demonstrated the habit of high voter turnouts during a general election? More so, Bahamians are generally not cigarette smokers. Why?

Why do many Bahamians seem to observe the signs for handicapped parking, while others breezily ignore the law? Why are we eager to help others by faithfully buying cook-out and raffle tickets?

Before seatbelt laws were passed at home, Bahamians generally buckled up when overseas. Once the laws were finally enforced, there was an extraordinary increase of the number of motorists buckling up; many of the very same people reticent to wear seat belts prior to enforcement. Why the quick change of habit?

In addressing social decay and a certain culture of criminality it is necessary that we better understand the culture of slackness and entitlement that has been encouraged by many leaders over the past several decades.

It is a form of cultural decay that has reinforced incivility, a breakdown of the most basic values of social life and mutual respect, and a slew of bad habits contributing to criminal enterprise itself or an acceptance of such conduct.

There is a broad variety of effective programmes in other jurisdictions which we can apply in The Bahamas to cultivate, mitigate and arrest certain habits by those tempted to or involved in gang violence.

Sadly, over the course of decades, no government has adopted successful programmes like Upward Bound or other intensive and immersive youth diversion programmes? Alas, we are good at saying the right things while dramatically failing to put talk into life-saving action.