FACE TO FACE: Ali’s on a mission to reshape our nation

SHE has been actively involved in political advocacy for more than two decades. She is the first female leader of a political party in The Bahamas. She created an institute designed to mould aspiring political candidates into great leaders. She has authored a book that gives a course of action for the country and she recently became a member of the cloth.

Sharell Ali McIntosh, affectionately known as Ali, is well known for her work with youth, the community, the church and nation building.

Her greatest work is still ahead. Ali believes her book “How To Reconstruct a Nation: Righteous Principles for National Leadership and Governance” will lay the path towards a new mindset for politicians in The Bahamas. She envisions the Bahamas Constitution Party (BCP) becoming the governing party one day, built on the foundation of the preamble of the Bahamas Constitution. 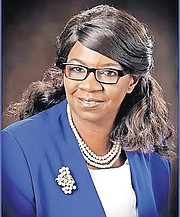 She explains how this vision came about: “I first received the revelation in 1998 for the Bahamas Constitution Party, I was encouraged to write the vision and make it plain. As a result, I began to research. The revelation that the Lord gave me, He told me to go to Washington, DC, to American University. While I was there, he gave me divine instructions for the nation, to run 39 candidates under the banner of the BCP. He told me to ask Christian men and women to make themselves available to serve.

“That began my research on the Constitution - the preamble, what it meant and who wrote the words. As a result, in 2001 I took a first step and went back to American University and wrote a paper called ‘Criteria for Leadership’ which dealt with national leadership and governance criteria. That was the basis of the book we now have. The concept is that there should be a criteria for men and women and the preamble of the Constitution gives core values for those coming forward for national leadership.”

Ali’s vision for the nation includes a change from what she calls a Parliamentary Democracy to a Constitutional Democracy, or a Republic. This, she believes, will allow for greater accountability and transparency in government.

“Inherent in the Westminster system, although it is a system of honour, they are Her Majesty’s Government and they can do whatever they like,” she explained.

MINISTER S Ali McIntosh, centre, flanked by other Ministers of the Gospel and supporters at her Bahamas ordination.

“To a great extent, based on the preamble of the Constitution, the rule of law should be applied in everything. But with the Westminster system, the political leaders almost become the rule of law. If we go to a Constitutional Democracy, the system is inherently accountable because each arm of government is accountable to the other. If we build the institutional integrity in the system, that is how we are going to be able to change what we have seen over and over again where each government comes to power and they do the same thing, giving the same results.

The values of the preamble of the Constitution should be remembered and enforced by all Bahamians in their lives in order to make the country a better place, Ali believes. Those values include industry, loyalty, unity, an abiding respect for Christian values, the rule of law, and self discipline. This, she said, was the vision of the founders of the Constitution for the making of a great country.

She encourages her fellow countrymen and women to move away from partisan politics, voting for the actual people offering themselves up for election, as opposed to voting based on political party ties.

Her book delves into this understanding that with servant leadership, politicians will accept national responsibility with the knowledge that “the rule of law is greater than any man”. The book is the principal publication for the Josiah Institute, which she also founded.

For this year’s Independence celebrations, the institute launched a year-long symposium, leading up to the 50th anniversary - The Bahamas’ Independence Golden Jubilee. It is being held under the theme: “How to Reconstruct a Nation - Countdown to Jubilee”.

The Josiah Institute is approved by the National Accreditation and Equivalency Council (NAECOB). In September, the institute will launch its courses for leadership training for aspiring and experienced politicians. There will also be advanced courses for public servants, accredited by American University. For more information, visit www.thejosiahinstitute.com.

Ali was heavily involved in youth and community projects since she was a youth herself. She founded the National Committee for Youth Renewal and Revival in 1995. She was also preaching from a young age, as she was a fervent part of the Student Christian Movement. This year was an amazing spiritual journey for her.

Her first official Ordination Service took place in Albany, Georgia under the leadership of Overseer Apostle DG Taylor and an eight-member ordination board on March 27, this year. There, Minister McIntosh was licenced and ordained as a Minister, Elder and Servant Leader by the Praise Power Deliverance Fellowship Ministries Inc (PPDFM). As a result of her ordination, Minister McIntosh has been asked to serve as the International Director of Recruitment and the Advisor on Global Servant Leadership for the PPDFM (Inc), bringing the organisation’s roots to The Bahamas. She will also lead the new ministry, Servant Leadership Ministries International (SLMI). She then returned to New Providence and was ordained on June 30 this year in a Service of Thanksgiving and Consecration. Several local apostles and ministers officiated, led by Chief Apostle Stefan Russell, Overseer of the Circle of Deliverance Worldwide Fellowship of Churches and Prophetess Patrice Smith of Kingdom Explosion Ministries International. Before presenting the official credentials of the newly ordained minister, she was officially given her ministerial robe by Apostle Agnes Glinton and Prophetess Patrice Smith.

Ali launched her book in early January in the Atlanta Metro area (City of Newnan), and presented a plaque and a copy of her book to the Mayor Keith Brady of Newman, Georgia. The book was published in the by Kimberley Stewart and Christian Living Books in Largo, Maryland (USA). The first five chapters of the book can be read at www.howtoreconstructanation.com, where the book is also available to buy.

Plaques were also presented to the Mayors of the City of Newnan and Hampton for their generosity and gifts for the Bahamian people during the Hurricane Dorian Relief Drive by the Ali McIntosh Children Charity (AMCC) in September 2019, when the AMCC raised a 20ft container filled with goods for the people of Abaco and Grand Bahama in the City of Newnan.

Ali stands on the shoulders of great Bahamians who paved the way in nation building: “Growing up in the late 1960s early 1970s, we were the first generation of Bahamians that really inherited what Majority Rule and Independence meant for the Bahamas. When our founders took the nation in 1967 and 1973, the first thing they did was to build schools so that we who were children would grow up, finish high school and have the opportunity to go to college. This was a rare thing. Only a certain number of children could go to private school or the Government High School. Being able to graduate was a privilege our parents did not have. Our parents had to leave school at 14 and go to work.”

“Knowing this, I was involved in everything from student Christian movement, speech and debate, Kiwanis, and so on. I remember seeing Telator Strachan and Ruby Ann Darling becoming senators. Lady Marguerite Pindling and my own mother, Pastor Jane White were women who did so much. My mother and her friends sat with Sir Randol Fawkes on Bay Street to make this freedom happen. It was a powerful thing for me to be able to know that these gains came to us… but not without a fight.”

“Nation building has been my concept all of my life,” she added.

“I am at the table and my concept is to serve the nation and put in place the principles that I have worked for all my life. I believe in educating the nation to the next level, pushing Urban Renewal - being able to put an instrument in every child’s hands. I want children to see when we govern that we do it with integrity. Young people should have no problem coming forward without having to compromise themselves to be involved in any political party in order to lead.”

“I want to make sure that when I leave, I have emptied myself of all I have been given to push forward and to serve this nation would be my greatest honour and yet my most humble service. I would love to accomplish being the first woman to be elected as leader of the country. I stand here now. I have prepared myself, educated myself and found some of the most talented people willing to serve to take the nation to the place where the founders intended it to be. By God’s grace and with His help, I am ready to stand as the primary leader for the Commonwealth of The Bahamas.”

Exactly what the country needs, a convention of clergy governing.

And when did integrity become inherent in the majority of members of the cloth? A famous quote from one of their more prominent members “ Principles don’t put bread on the table!”