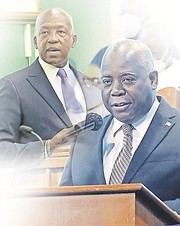 THERE have been mixed signals on taking action over marital rape, with different statements from Minister of Works Alfred Sears and Prime Minister Philip “Brave” Davis.

“So, it has to be a multi-dimensional approach and the government and the Prime Minster has emphasized to all of us right across the board in all of our ministries to take affirmative action and to be very clear in the policy we implement that there is a recognition that we have to reverse this legacy of patriarchy and discrimination.”

Outlawing marital rape is a clear and easy moral call. It is about upholding the innate dignity and corresponding equality of women, including spouses, mothers, daughters, sisters, friends and colleagues.

The matter is generally only complicated in the minds of those do not view women as equal and who are still shackled by patriarchal conceits and power, and the need to maintain their control and domination of women.

A nation should protect the human rights of all women regardless of marital status. A jurist advises: Our rape laws effectively provide an exemption for spousal rape. Moreover, they betray a deeply religiously fundamentalist worldview and are a legacy of a colonial and pre-modern mindset.

Outlawing spousal rape can be fairly easily done legislatively and without recourse to a referendum. The vast majority of countries in the region and the world have outlawed such violence against women.

We do not need a “national conversation” on the matter that may just become a talkfest without action. In quite a number of countries where spousal rape was outlawed, it was done despite the majority of citizens objecting, believing, erroneously, that a man cannot rape his wife.

But the political directorates acted to outlaw spousal rape because it was ethically the right thing to do and good public policy, and despite the majority of citizens not supporting removing the marital exemption.

Throughout history, governments have acted to improve societal and evolving global norms despite majoritarian opposition because of prejudice, superstition and outdated mindsets. What is politically popular is not always ethically right.

It is disgraceful and ridiculous that a cabinet minister says he prefers not to give his position on the matter because he has to lead certain symposia. Would this be his position on other clear moral calls such as rape in general or child abuse?

Minister of Works, Alfred Sears, a progressive, noted the Davis administration’s commitment “to reverse this legacy of patriarchy and discrimination” and a “multidimensional approach”.

The overwhelmingly male cabinet might begin with a compelling example of this determination by vigorously championing in word and deed the equality of women by outlawing marital rape. This is a test of its commitment to gender equality.

One cannot boast of “affirmative action” in some areas if one glaringly and inconsistently fails on the question of spousal rape, which would run counter to a “multidimensional approach”. This is a matter of basic social justice.

Mr Sears also stated: “As you know, the first attempt to remove those offending provisions of our constitution was taken by our party and government…” One cannot imagine to what the former Attorney General is referring.

It was the Free National Movement that held the first referendum “to ensure that Bahamian women and men are treated equally in their ability to confer nationality to children and spouses”. The PLP Members of the House of Assembly voted in support of the changes.

Then, in what many viewed as political expediency to curry favor with the electorate in the lead-up to the 2002 general election, the party’s leadership reversed course and opposed the referendum on the grounds of “process”, which many deemed a convenient red herring.

Rape is a pernicious and heinous tool of violence. It was used by slave traders and masters against male and female slaves. It has been used in wars and conflicts as an instrument of control. It is one of the most brutal experiences feared by women.

Outlawing spousal rape is about the protection of women and fostering a greater consciousness of the dignity and equality of women in the minds of men and women.

In a recent story in this journal, Prime Minister Davis offered additional thoughts on marital rape and gender equality. His comments were perplexing and confusing. He once again seemed to be parsing his words on this matter.

“I think the question about gender equality is much wider than just the narrow concept of what I call a description of violence. I call it descriptive because it says marital rape but that’s violence in a different form and what the controversy arises because of the manner in which we describe it.

“We just need to say what it is. It’s a domestic violence that requires attention and the laws are there for that purpose and perhaps it just needs clarity in definition. That in and of itself is not sufficient for us to reach our goal of gender equality.”

The Prime Minister’s circumlocution suggests equivocation. The government is sending mixed signals and seems confused. A February 4 story in The Tribune left the country even more confused: “The Ministry of Social Services and Urban Development has drafted a proposed bill that addresses gender violence issues, including marital rape, Minister of State for Social Services and Urban Development Lisa Rahming has said.

“However, a government official previously said the proposal Ms Rahming referenced does not speak to marital rape. It speaks to abuse in various relationships including marriages, the official said…”

Mr Davis also stated: “The unfortunate factor is that on two attempts, how our legal construct, our constitution and other consequential laws, domestic laws to ensure gender equality – the Bahamian people voted against it.

“We had two referendums and what is so ironic about that fact is that we have more females on the voting registrar than males but yet still we have on two occasions and an attempt to amend our constitution to entrench the concept of gender equality fails.

“So we have to devise and this is what this government is doing. So, looking at domestic laws and seeing how we can level the playing field so as to ensure that there is gender equality.”

The vote by many women against advancing equality is not “ironic”. It is another sad example of how those who are often bound by certain strictures find it difficult to liberate themselves and their consciousness.

“So, it has to be a multi-dimensional approach and the government and the Prime Minster has emphasized to all of us right across the board in all of our ministries to take affirmative action and to be very clear in the policy we implement that there is a recognition that we have to reverse this legacy of patriarchy and discrimination.”

All of these measures and more women in office are critical. In order to change the culture, to empower more women, to let girls know they are equal, to stem gender-based violence we must also outlaw marital rape.

There is a lack of moral clarity on this issue by many, including many in cabinet. Prime Minister Davis has an opportunity to do something all of our former Prime Ministers failed to do.

Yes, the politics of this is difficult. But what is the purpose of power and high office if one fails to meet some of the greater moral tests of the times? In “When I Hit You: Or, A Portrait of the Writer as a Young Wife”, Meena Kandasamy, the Indian poet and writer, offers: “Good women don’t have bad things happen to them – in order to be raped, I need first to be made into this caricature of a bad woman. This male psycho-sexual logic looks at penetration as punishment.

“This is the rape whose aim is to make me understand that my husband can do with my body as he pleases. This is rape as ownership.”

Throughout his public career, Alfred Sears often spoke of using the fleeting time we have and the opportunity to serve in government, to do big things, to right historical wrongs and to help in the long march for equality.

Those who seek to bend the moral arc of justice and to advance the rights of women have a compelling responsibility, a moral obligation, to outlaw spousal rape, now!