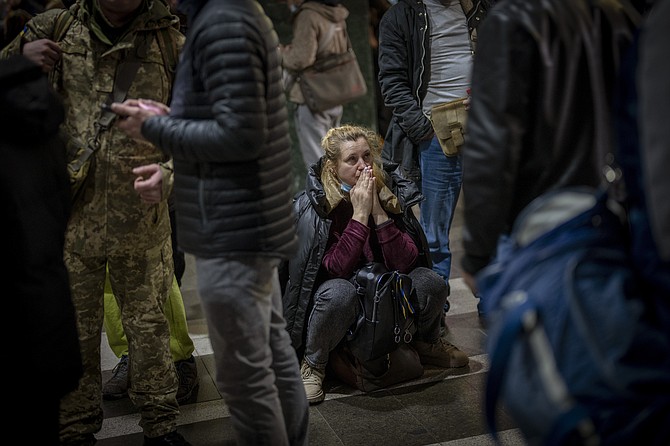 A woman reacts as she waits for a train trying to leave Kyiv, Ukraine, Thursday, Feb. 24, 2022. (AP Photo/Emilio Morenatti)

Damaged radar, a vehicle and equipment are seen at a Ukrainian military facility outside Mariupol, Ukraine, Thursday, Feb. 24, 2022.

KYIV, Ukraine (AP) — Russia launched a full-scale invasion of Ukraine on Thursday, unleashing airstrikes on cities and military bases and sending troops and tanks from multiple directions in a move that could rewrite the world's geopolitical landscape. Ukraine's government pleaded for help as civilians piled into trains and cars to flee.

President Vladimir Putin ignored global condemnation and cascading new sanctions as he unleashed the largest ground war in Europe in decades, and chillingly referred to his country's nuclear arsenal. He threatened any country trying to interfere with "consequences you have never seen."

Ukrainian officials said their forces were battling Russians on a multiple fronts, and had lost control of the decommissioned Chernobyl nuclear power plant, scene of the world's worst nuclear disaster.

"Russia has embarked on a path of evil, but Ukraine is defending itself and won't give up its freedom," Ukrainian President Volodymyr Zelenskyy tweeted.

In Washington, U.S. President Joe Biden announced new sanctions against Russia, saying Putin "chose this war" and that his country would bear the consequences of his action.

The sanctions will target Russian banks, oligarchs, state-controlled companies and high-tech sectors, he said, adding they were designed not to disrupt global energy markets. Russian oil and natural gas exports are vital energy sources for Europe.

Zelenskyy urged the U.S. and West to go further and cut the Russians from the SWIFT system, a key financial network that connects thousands of banks around the world. The White House has been reluctant to immediately cut Russia from SWIFT, worried it could cause enormous economic problems in Europe and elsewhere in the West.

President Joe Biden speaks about the Russian invasion of Ukraine in the East Room of the White House, Thursday, in Washington. (AP Photo/Alex Brandon)

Zelenskyy, who earlier cut diplomatic ties with Moscow and declared martial law, described Russian forces advancing on a series fronts, including a "difficult situation" developing in Kharkiv, Ukraine's second-largest city, just over 20 kilometres away from the eastern border with Russia, and Russian troops slowly advancing from the north on the city of Chernihiv. He said a Russian airborne unit at an airport just outside Kyiv, the capital, was being destroyed.

He appealed to global leaders, saying that "if you don't help us now, if you fail to offer a powerful assistance to Ukraine, tomorrow the war will knock on your door."

Both sides claimed to have destroyed some of the other's aircraft and military hardware, though little of that could be confirmed.

Hours after the invasion began, Russian forces seized control of the zone around the now-unused Chernobyl plant after a fierce battle, Zelenskyy adviser Myhailo Podolyak told The Associated Press.

A Ukrainian official said Russian shelling hit a radioactive waste repository and an increase in radiation levels was reported. The official spoke on condition of anonymity to discuss the sensitive matter.

A nuclear reactor at the plant 130 kilometres (80 miles) north of Ukraine's capital, Kyiv, exploded in 1986, sending a radioactive cloud across Europe. The damaged reactor was covered by a protective shelter several years ago to prevent radiation leaks.

"This is one of the most serious threats to Europe today," Podolyak said.

The chief of the NATO alliance said the "brutal act of war" shattered peace in Europe, joining a chorus of world leaders who decried the attack, which could cause massive casualties, topple Ukraine's democratically elected government and upend the post-Cold War security order. The conflict was already shaking global financial markets: Stocks plunged and oil prices soared amid concerns that heating bills and food prices would skyrocket.

Condemnation rained down not only from the U.S. and Europe, but from South Korea, Australia and beyond — and many governments readied new sanctions. Even friendly leaders like Hungary's Viktor Orban sought to distance themselves from Putin. British Prime Minister Boris Johnson said he aimed to cut off Russia from the U.K.'s financial markets as he announced sanctions in response to the invasion.

As the first major world leader to make a big move, Johnson announced a freeze on the assets of all large Russian banks and plans to bar Russian companies and the Kremlin from raising money on British markets.

Johnson said of Putin: "Now we see him for what he is — a bloodstained aggressor who believes in imperial conquest."

A senior U.S. official said the U.N. Security Council was expected to vote Friday on a resolution condemning Russia for the attack and demanding the immediate withdrawal of its forces. The vote will proceed even though the legally binding measure will almost certainly be vetoed by Russia, said the official, who wasn't authorised to discuss the matter publicly and spoke on condition of anonymity.

While some nervous Europeans speculated about a possible new world war, the U.S. and its NATO partners have shown no indication they would send troops into Ukraine, fearing that would risk a larger war. They instead mobilised troops and equipment around Ukraine's western flank — as Ukraine pleaded for defense assistance and help protecting its airspace.

NATO also reinforced its members in Eastern Europe as a precaution.

"Make no mistake: We will defend every ally against any attack on every inch of NATO territory," said NATO chief Jens Stoltenberg.

Biden said the U.S. was deploying additional forces to Germany to bolster NATO.

It wasn't until late Thursday afternoon that Russia confirmed that its ground forces had moved into Ukraine, saying they'd crossed over from Crimea, the southern region that Russia annexed in 2014.

After weeks of denying plans to invade, Putin launched the operation on a country the size of Texas that has increasingly tilted toward the democratic West and away from Moscow's sway. The autocratic leader made clear earlier this week that he sees no reason for Ukraine to exist, raising fears of possible broader conflict in the vast space that the Soviet Union once ruled. Putin denied plans to occupy Ukraine, but his ultimate goals remain hazy.

Ukrainians who had long braced for the prospect of an assault were urged to shelter in place and not to panic.

"Until the very last moment, I didn't believe it would happen. I just pushed away these thoughts," said a terrified Anna Dovnya in Kyiv, watching soldiers and police remove shrapnel from an exploded shell. "We have lost all faith."

With social media amplifying a torrent of military claims and counter-claims, it was difficult to determine exactly what was happening on the ground.

AP reporters saw or confirmed explosions in the capital, in Mariupol on the Azov Sea, Kharkiv in the east and beyond. AP confirmed video showing Russian military vehicles crossing into Ukrainian-held territory in the north from Belarus and from Russian-annexed Crimea in the south.

Russia and Ukraine made competing claims about damage they had inflicted. Russia's Defense Ministry said it had destroyed scores of Ukrainian air bases, military facilities and drones, and confirmed the loss of a Su-25 attack jet, blaming "pilot error." It said it was not targeting cities, but using precision weapons and claimed that "there is no threat to civilian population."

Poland's military increased its readiness level, and Lithuania and Moldova moved toward doing the same. Border crossings increased from Ukraine to Poland, which prepared centers for refugees.

Putin justified his actions in an overnight televised address, asserting the attack was needed to protect civilians in eastern Ukraine — a false claim the U.S. predicted he would make as a pretext for invasion. He accused the U.S. and its allies of ignoring Russia's demands to prevent Ukraine from joining NATO and for security guarantees.

He called the military action a "forced measure" stemming from rising security risks for Russia.

Anticipating international condemnation and countermeasures, Putin issued a stark warning to other countries not to meddle.

In a reminder of Russia's nuclear power, he warned that "no one should have any doubts that a direct attack on our country will lead to the destruction and horrible consequences for any potential aggressor."

Among Putin's pledges was to "denazify" Ukraine. World War II looms large in Russia, after the Soviet Union suffered more deaths than any country while fighting Adolf Hitler's forces.

The Kremlin has painted members of Ukrainian right-wing groups as neo-Nazis, exploiting their admiration for WWII-era Ukrainian nationalist leaders who sided with the Nazis. Ukraine is now led by a Jewish president who lost relatives in the Holocaust and angrily dismissed those claims.

Hours before the invasion, Zelenskyy rejected Moscow's claims that Ukraine poses a threat to Russia and made a passionate plea for peace.