DIANE PHILLIPS: Strange as a 3-dollar bill, but it’s real and I get it

I HAVE a $3 bill. It’s Bahamian. I can’t remember where or when I got it, but I always believed there was something special about it so I tucked it away in a small basket with other odds and ends in my daughter’s room right next to a US $2 bill which I also cannot recall where or when I got it.

Both bills have been there for probably more than 20 years and they are still worth $3 and $2, so far as I know. Though they might not buy me more than a few vegetables to throw into a pot of homemade soup, I can touch them and feel them and spend them if I want and I know exactly what they are worth, though no doubt inflation has eroded their value.

I only mention this because as a writer and someone in public relations, I am trying to wrap my head around how crypto works. The paper bill is easy. I get that. So is digital. I get that, too. It’s just paper turned virtual. You have a virtual wallet, put something in it, spend it, the wallet gets thinner so you fill it up again. It’s an even exchange. A dollar goes in, a dollar comes out. A tiny fee for the service slips in somewhere. Most of us depended upon digital wallets during lockdown in the famed March of 2020 when COVID was still new and we hid behind our doors so it could not find us.

Digital is so easy it’s the antithesis of the leading edge of the fintech world. Crypto, now that’s a different story. Unlike digital or paper currency, crypto fluctuates in value and those peaks and valleys have nothing to do with the economy, so far as I can tell. They are connected with who is trading, buying and selling, and buying back the very thing that is fluctuating. There are different registries, let’s call them brands or houses for simplicity sake, with different investment specialists and analysts guiding them, choosing a road map for them whether they use them to buy real estate or art or fine wine. I feel lost and ignorant in this world where currency flitters and flounces like a wannabe on Dancing with the Stars. It’s a world that feels flirtatious, risky, scary and exhilarating.

Crypto is money you can’t hold, like a hologram or a mirage, but you can become a billionaire on it. What adds to my confusion is that before crypto, I thought the problem was not holding money but holding on to it.

I’m particularly fascinated by the subject of crypto because the man who is king of it landed in The Bahamas and opened his first official international headquarters in New Providence a few months ago. His name is Sam Bankman-Fried (known as SBF) and he is the founder and CEO of FTX, a company that after a little more than two years of existence has made its founder a multi-billionaire with an estimated worth of $22.5 billion.

SBF is the youngest billionaire at 29. I wasn’t even a thousandaire by 29 and I had been working since I was 14. So clearly he knows a thing or two about investing in crypto, understands tokens and assets. He also has an excellent reputation for altruism and could serve as a role model for young Bahamians who might resent successful older Bahamians but be persuaded to do the good deed by this man who achieved so much so young. Welcome to The Bahamas, SBF and FTX. Even if I never own a crypto asset, I can admire what you can do to drag The Bahamas into the future.

Meantime, I’ll just hold on to that $3 bill with the image of a young Queen Elizabeth on one side and racing native sloops on the other. I’ll tuck it back into its basket next to the US $2 bill with Thomas Jefferson on the front and the signing of the Declaration of Independence on the back. If crypto is the currency of the future, tangible treasures are worth preserving to honour the past.

A landscape plan for New Providence

Creating a landscape plan supported by landscape policy for New Providence is an idea that has been bouncing around for years, but has yet to take root.

Close your eyes and imagine this – you are driving along East West Highway and all the Yellow Elder trees are in bloom or along West Bay Street where the median now holds the occasional sign or bench and instead it is lit up by the flaming red of Royal Poinciana trees. Imagine palms along Yamacraw and beach morning glory, rows of sea oats, silver buttonwood along the coastal roads. From Sir Milo Butler Highway to the Bethel Avenue extension, Cowpen Road to the southernmost point of Blue Hill where the beach nearly reaches the road, the potential for billowing bougainvillea would transform now barren or partially neglected areas. The beauty of the Cable Beach strip should be an inspiration to us all.

While the glamour is in the plan and in picturing the impact a landscape plan would have, as much attention would need to be given to landscape policy determined by a group of experts. Those who are willing to take the time and add their expertise would determine whether only indigenous varieties of trees and shrubs would be permitted in the plan, whether there would be provision for annuals, whether or not there would be community areas set aside for fruit and vegetable gardens, who would be responsible and how the produce would be shared. There would be discussions on xeriscape plants, grasses and trees, and those requiring little sunlight, on how to grow more madeira or lignum vitae, on ficus hedges instead of chain link, on how to beautify overlooked neighbourhoods one block at a time.

This is a goal we can accomplish if we just plant the seed and form the group to nurture it and take it forward, a goal that would brighten the island where hundreds of thousands live and millions come to play. 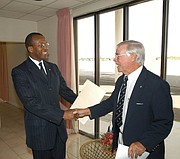 ALFRED SEARS, then Minister of Education, greeting Roger Kelty, the beloved educator who oversaw more than 1,000 students getting a higher education with the help of a Lyford Cay Foundation scholarship.

Long-time beloved educator Roger Kelty passed away this week. For more than 15 years after he left Queen’s College, Kelty was the Director of Education at the Lyford Cay Foundations. He perused scholarship applications searching for talent, for hidden potential, he passed every one of them onto a screening committee. He knew thousands of students by name and even when one disappointed him he never lost faith nor that twinkle in his eye. We will miss you, Roger, but you did good, real good. And don’t try to correct my grammar now. Your job is done and no one will ever do it like you did.