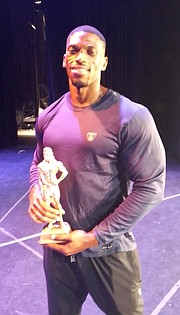 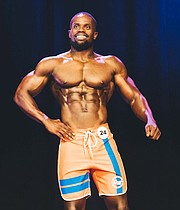 JUDAH Forbes on the stage.

Their performances should cement their spots on the federation’s national team that will represent the Bahamas at the Central American and Caribbean Bodybuilding and Fitness Championships July 27 to August 1 at the Lloyd Erskine Sandiford Center in Bridgetown, Barbados.

Federation president Joel Stubbs said they are expected to announce the team selection within a day or two so that the athletes can prepare for the trek to the championships.

Fans showed up in great numbers in groups to support their favourite competitor as they yelled and screamed every time they came onto the stage to strut their stuff until the announcements were made on the final winners.

Young, omitted from the final stage appearances with all of the winners, said he was not disappointed when his name wasn’t called for the men’s physique title. He kept his composure and was more elated that the officials recognised the mistake, albeit, after the crowd had dispersed.

“I felt good about it. I knew I worked hard for it all season,” said Young in receiving the trophy in his bitter-sweet victory. “It showed tonight. I put in the work and I am happy. Things happen. That’s a part of life.”

The 37-year-old Young, however, said his focus is concentrated on getting ready for his fourth CAC Championships. He intends to be “sharper” as he changes his diet to go on stage more developed in his bid to improve on his second place finish at the 2019 championships.

From lacing up her track shoes to walking on stage in more high heels, Saunders didn’t have a problem making the necessary adjustments to becoming the women’s wellness champion.

“I anticipated doing very well, but nothing is never expected in this sport because it is so objective,” she said. “I just know I had a plan and I wanted to be effective with my plan and I wanted to execute the things that I trained for. I’m just so happy to be on this stage performing.”

The 38-year-old Saunders was a promising 400m specialist, but since 2018, she’s been in the gym preparing for her transition to the big stage as a fitness competitor. “I won the Northern Division and I won it again here, so I’m just so elated,” said Saunders, who started competing in the wellness competition in 2016 when it was first introduced, but noted that she definitely misses track and field because “it’s still my first love.”

As she prepares for CAC, the self-employed Saunders said she would like to be able to put on some more mass to be more effective.

Already acclaimed as the first female heavy equipment operator at Bahama Rock in Grand Bahama, Sanadia Smith came to town and crushed the competition in the women’s figure category.

She was also honoured for assisting in the success of the recent Northern Bahamas Championships.

“I felt like I made an improvement from the initial show that they had in Grand Bahama,” said Smith of her victory in the same category at the Northern Bahamas Championships. “I love the competition. I brought my A-game and I felt very good being on the stage.”

The 31-year-old Smith said if selected for the CAC Championships, she wants to just “tighten up” and be a lot leaner.

With his two coaches Paul ‘Mighty Mouse’ Wilson and Leonardo ‘Nardo’ Dean presenting him on stage with his men’s bodybuilding title, Farrington said he couldn’t ask for a better performance.

“I want to give God thanks for allowing me to come here and to perform,” said Farrington, a long-time member of the Royal Bahamas Police Force. “I was actually thinking about calling it quits when COVID-19 came.

“However, my coaches saw the potential in me and I also want to thank Joel Stubbs because he was there to help motivate and encourage me in training. I came out here and I brought the package to win and now it’s time to get ready for the CAC Championships.”

Looking at the performances, president Stubbs said the show was a great one, considering that many fans showed up as they were eager to watch the competitors compete for the first time since the pandemic stuck in 2020.

“We are starting and rebuilding at the same time,” Stubbs said. “We will mix the bitter with the sweet and at the same token, encourage and support these new athletes who came on board and want to advance and excel in their fitness goals. We want to be there for them”

• Here’s the results from the various categories:

Gym with the most participants – J-Line Fitness.