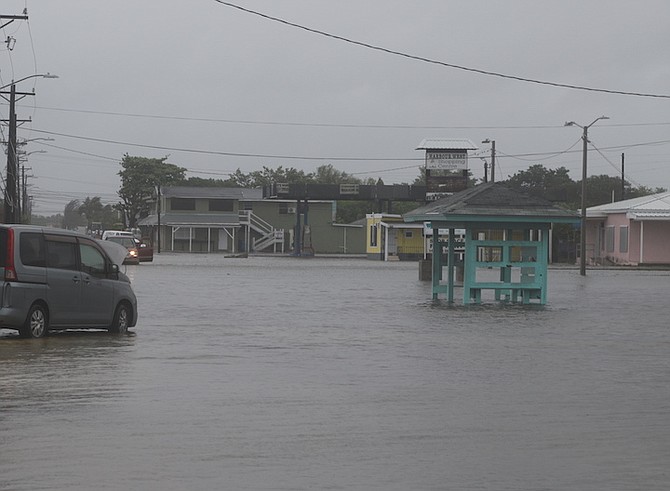 One hundred of those homes have been identified on Grand Bahama while another 40 were reported to have suffered damage in Bimini.

Most of the storm affected homes had already been “compromised” by Hurricane Dorian in 2019.

“So, we’re still really calculating (the damages),” she said before going to a cabinet meeting yesterday. “So far, we’ve identified about 100 homes (in Grand Bahama) I’m sure there’s more than that. Also in Bimini, there’s about 40 homes. And so, we’re looking to see how we can provide assistance there. Like I said, I’m really pushing to have some immediate funds available, so that we can get some stuff done now.”

Tropical Cyclone Alex made landfall in several islands in the northern Bahamas over the weekend, including Abaco, Grand Bahama and the Berry Islands, before it reached tropical storm status.

Weather officials said the system, which is now considered the first named storm of the Atlantic hurricane season, dropped 10.69 inches of rainfall on Grand Bahama within a 48-hour period, causing serious flooding in some parts of the community.

The island’s airport was also closed on Saturday due to winds associated with the system.

Speaking on the storm’s impact yesterday, Ms Moxey highlighted flooding damage as the main issue of concern for residents there.

“Grand Bahama did experience localised flooding in areas and this was a potential tropical cyclone so it says a lot about really what is happening in the world really, with climate change,” she said.

“Of course, we are still recovering from Dorian and so there’s a lot of roof damage. Still, a lot of people needed help like that, but we have been working and were on the ground the next day really assessing the damage. We visited families, and we are on it - the Minister of Social Services and Urban Development as well as the Minister for Foreign Affairs who was always on Grand Bahama island. He was there as well. “

“…Really, flooding is a problem I would say throughout The Bahamas right now, in particular, Nassau and Grand Bahama Island and we are addressing it. We have our Grand Bahama Disaster Consultative Committee that would have met prior to this. They had been meeting virtually for since January and there was a special meeting that was called last Thursday, prior to the storm.”

“There is all hands on deck. We’ve been coordinating with the private sector, that would be the regulatory agencies as well as the utility providers and we are really formulating the best plan and the best approach to dealing with these types of situations. But, of course, you know what Grand Bahama has experienced and we are working really to address how we deal with it moving forward.”

Ms Moxey also said one way her ministry is seeking to address storm related issues on the island is by petitioning the government for more funding.

However, she could not say how much is needed to strengthen the island’s resilience and also further storm relief efforts there.

She only said: “What I will say is that the funding that I need is really to get the shelters to a place where you have more shelters available. So that is one of the priority items and then you have those that have compromised roofs and all that from Dorian,” she said.” So, a lot of it is Dorian related and the homes that were affected now were Dorian related, and it’s just that they hadn’t received the assistance before.”

Weather experts have already predicted an active and “above average” 2022 Atlantic hurricane season, with 19 named storms and nine hurricanes expected this year.

"we are really formulating the best plan and the best approach to dealing with these types of situations. But, of course, you know what Grand Bahama has experienced and we are working really to address how we deal with it moving forward.”

"Workjng on HOW we'll address it moving forward"???? 3 years after Dorian and we're stumped by 10" of rain. Pray God that we do not have a serious hurricane

No more flood coverage for these poor folks. Next time it rains heavy the unfortunate home owners will be out of pocket for any damage. They had better keep some cement blocks on hand (to put their furniture on) and make their kitchen cabinets out of plastic.