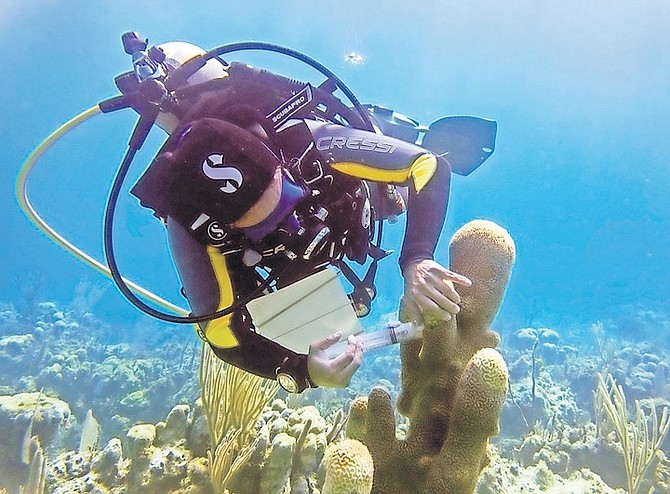 A marine biologist at the Perry Institute delivers life-saving antibiotic treatment to a pillar coral (Dendrogyra cylindrus) colony off Rose Island. This coral species has already been wiped out in San Salvador because of its high susceptibility to SCTLD, which is ripping through the country’s reefs.

The Bahamas National Trust’s (BNT) top executive yesterday warned that tourism and other coral reef-reliant industries will be “decimated” unless this nation rapidly arrests the spread of a killer disease for these key marine ecosystems.

Eric Carey, its executive director, also made an impassioned call for the Government to break through the environmental and scientific permit logjam by issuing the interim and temporary permits that are critical for Bahamian and international researchers to obtain a better understanding of Stony Coral Tissue Loss Disease (SCTLD).

Speaking after the Perry Institute for Marine Science (PIMS), which has been leading the scientific fight against the disease, warned that it has spread much more rapidly through the Bahamian archipelago than initially feared, he added that the economic consequences could be dire for both fisheries and tourism, especially the latter’s dive and recreational fishing segments.

“The implications I would say are very serious, and I would say that the scientists agree, that if this disease is not arrested and does not abate, it would be disastrous and potentially decimate any tourism related to any diving of recreational fishing etc,” Mr Carey told Tribune Business.

“It could potentially decimate Bahamian fishing, any species associated with coral reefs, our lobsters and so much of our reef fish could be devastated. From an ecological perspective, because coral reefs are key ecosystems and centres of fisheries, their loss would be catastrophic for the marine environment.

“This is a very serious disease, and the report produced most recently by the Perry Institute for Marine Science led by Dr Krista Sherman, the results are far worse than imagined and based on the preliminary analysis it has spread much faster than we would have anticipated.”

The Perry Institute for Marine Science, in a statement issued yesterday, said Stony Coral disease has spread across The Bahamas like “wildfire” over the past three years and has caused the environmental equivalent of 200m deaths. Its latest research is said to show some 175 square miles of Bahamian coral reefs have been infected to-date and the disease has already driven local extinctions of key reef-building species.

The Institute added that Stony Coral disease has been detected in the northern Exumas, causing concern for the future of the world’s oldest land and sea park and flagship for the Bahamas National Protected Area System. San Salvador was also identified as being among the hardest hit islands, with every nearshore reef infected and three coral species that were once common are now locally extinct.

Mr Carey said the threat posed to Florida’s coral reefs by Stony Coral disease was so serious that the US state considered cutting out and removing large areas of coral to aquariums so that key species could be protected from extinction until either nature or scientists developed a cure.

“This is a pandemic,” the BNT chief told this newspaper. “The fear Bahamians assign to the COVID pandemic, they should assign as much concern to the impact of this wretched disease on our coral reefs and all industries associated with it. It’s very serious.”

While on occasions in the past he has had to advise that scientists are “exaggerating” or being “over-dramatic” with their advice and conclusions, Mr Carey said The Bahamas “does not have this issue here”. He added: “We need to get back to understanding this disease. We are not being issued research permits yet.”

Tribune Business previously reported how environmental and scientific research in The Bahamas had been brought to a near-standstill by the former Minnis administration’s passage of the Biological Resources and Traditional Knowledge Act into law on April 1 last year.

One of the existing Act’s “key deficiencies” was the failure to distinguish between commercial research and that conducted by non-profits, conservation groups and students, subjecting them all to the same regulatory regime, which has resulted in lengthy delays that have made it almost impossible for non-commercial entities such as the Perry Institute for Marine Science to get approval to investigate issues such as Stony Coral disease.

The Institute, in its statement yesterday, said: “The Bahamas missed a critical window to contain the fatal coral disease after it was first identified over two years ago. Despite the existence of an antibiotic-based treatment, a ‘permit crisis’ - a backlog of pending research permits issued by the Department of Environmental Protection and Planning (DEPP) - continues to sideline ocean scientists across the country for nearly two years.

“This allowed PIMS a short window to survey and treat corals between March and May 2022. Paperwork was recently renewed for another 105 days because of Cabinet’s direct support, allowing scientists to keep fighting the disease but leaving them gravely concerned about the future of Bahamian coral reefs and other natural assets such as sustainably certified fisheries in the absence of basic research permits.”

Mr Carey yesterday said scientists and environmentalists are confident that both Senator Ryan Pinder, the attorney general, and DEPP director, Dr Rhianna Neely-Murphy, are “committed to resolving the deficiencies in the legislation”. However, he warned that the Stony Coral disease’s advance means “we do not have the time” to wait for Parliament to pass the necessary reforms into law.

“What we’re asking both of them to consider, along with their government colleagues, is the issuance of temporary research permits in the interim,” he added. “Until we resolve the issue, let’s issue permits to research institutes like the Perry Institute for Marine Science who are in it for the science and not the ego. We as a country need to make a decision. It’s the right thing to do until we have a solution in place that distinguishes between commercial and non-commercial research.”

The Perry Institute for Marine Science, which has surveyed more than 175 sites spread across 500 miles for Stony Coral disease, said one solution currently awaiting Bahamian Cabinet action is the creation of an on-land coral rescue facility - a “coral gene bank” or even a “coral ark” - which it added represents the “last best chance at saving particularly vulnerable species from extinction”.

The Institute added that it has raised $750,000 to establish such a facility at “one of Nassau’s most sophisticated scientific aquariums with operating agreements now in place. The group has also secured strong donor interest and ongoing grants to scale up the fight against the coral pandemic both in-sea and on-land.

“In anticipation of ongoing permits on at least this matter, PIMS is eager to partner with the Government, the University of The Bahamas, the Cape Eleuthera Institute, BNT and many other groups to scale up the current ‘battle’ to a full-fledged ‘war’ against Stony Coral disease.”

“Preventing species extinction and total ecosystem collapse is our top priority,” said Dr Craig Dahlgren, PIMS’ executive director. “Part of our long-term strategy is to move rare and vulnerable wild coral colonies to a biosecure, land-based aquarium where we can grow and shelter them from the devastating impacts of Stony Coral disease....

“At this point, the future of The Bahamas’ coral reefs lie with the Government, and their willingness to issue life-saving environmental permits and the creation of the biosecure land-based ‘coral ark’. We hope they put the health of our oceans first.”

Yet Carey seldom if ever speaks out against all the environmental damage that has been done and continues to be done by the cruise ship companies in our territorial waters, namely Royal Caribbean, Carnival, Disney, et al. Guess we know who has been buttering his bread during the many years he has been drawing an extremely generous salary at BNT.

There should be an immediate moratorium on cruise ships in our waters. At such time as the health returns to our marine environment, IF it returns, I would suggest only the smallest cruise vessels be admitted in limited numbers.

The damage done from the dragging Anchors of all the Cruise Ships that threw anchor within our territorial waters for “free” during the Pandemic caused extreme damage to our Reefs that took hundreds, if not thousands, of years to develop … and for which we received $0.00 compensation!

SCTLD sounds like Covid for Coral. A bunch of hype. The medical community has lost all respect. I dont even wanna hear about this. If all the corals die then they die and it's the Fauci followers' faults. Too bad, too sad. We've just had enough. Bye.

On a related note, while coral restoration projects can help local reefs recover from the effects of warming temperatures, many have only had a temporary effect on recovery. Long-term, more widespread solutions involve changes in the way we utilize our environment, including well-enforced large marine protected areas and, more importantly, reducing fossil fuel and other greenhouse gas emissions. Globally, warming oceans are, by far, the main threat to coral reefs and marine ecosystems generally, and our only hope is to slow and eventually stop human-driven global warming.