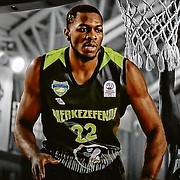 Coleby signed with Heroes de Falcon in the top tiered basketball league in the country. The winners and runners-up of each SuperLiga season qualify for the FIBA Americas League regular season.

The 6’10” veteran forward and national team player has been a member of three clubs during the 2021-22 season.

He most recently spent time with Al Sharjah of the United Arab Emirates National Basketball League. They finished with the league’s second best record during the regular season and reached the league final.

Coleby previously spent time with Cholet Basket of the JEEP Elite Pro A League in France, the top tiered basketball league in France..

He originally intended to join Anwil Wloclawek of the Polish Basketball League (PLK) for this season but a failed medical led to the contract being voided.

In a history-making milestone season for the club, he averaged 12.8 points, 10.1 rebounds per game and was named Eurobasket. com all TBL Honourable Mention and Player of the Week twice. Denzeli was also granted promotion to the ING Turkish Basketball Super League, the top division in the country.