Lincoln Bain faces off with officials over Crown land issues 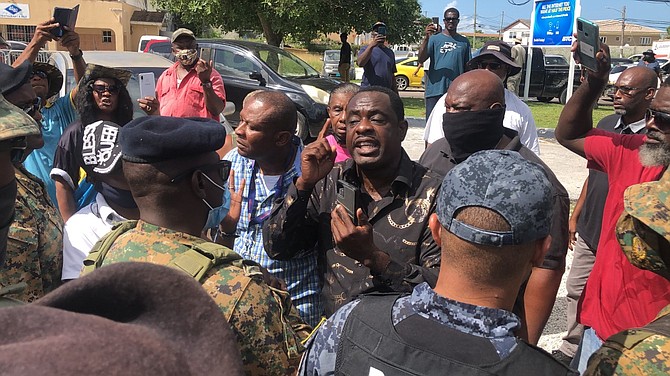 FARMERS occupying Crown land in the Carmichael Road area raised issues with Friday’s police ride-along in their community and what they claim is wilful government neglect of deforestation there.

Shortly after members of the press, along with the Minister of National Security Wayne Munroe, disembarked from the ride-along in the National Pine Forest near Bacardi Road, a brief argument broke out between a member of concerned farmers and the authorities.

Coalition of Independents leader Lincoln Bain claimed that he was assaulted by a member of the RBDF as he tried to approach the staging area.

After stating his intention to seek legal action against the Defence Force officer, Mr Bain speaking on behalf of other farmers occupying Crown land in the so-called Lincoln Bain area, stating that they had not been properly consulted before Friday’s operation took place.

“We should have been invited. We were told by Superintendent Strachan that we would be invited to be a part of this. Y’all lied to us. You all tried to silence us yesterday because y’all don’t want the full story of what’s going on in the back here,” Mr Bain said.

Mr Bain also criticised the government for its delayed intervention concerning the deforestation in the Carmichael Road area, claiming it was because several politicians are part of a larger conspiracy surrounding the issue.

Mr Bain went on to attribute the deforestation and shanty towns in the area to illegal immigrants. He also claimed that their makeshift homes, along with the dump in the area, were intentionally bypassed in the ride-along route.

Despite these claims, during the tour the press encountered a Bahamian woman and her children living in a bus turned makeshift home in the area. The Minister of State said government would try to offer her assistance.

Speaking directly to the press, Mr Bain condemned the government for not cracking down on shanty towns in Abaco with the same force he accused them of using on Friday. Mr Bain also said many of the farmers only wish to protect the land from deforestation.

“All of the people behind me are farmers who are peacefully occupying this land. Many have been here for many, many years and all they want is to possess this land. Since we came back here, no illegal immigrants were allowed to take down our trees or remove our trees,” Mr Bain said.

“They didn’t take ya’ll to the area where they say is the Lincoln Bain area because all the trees still there. They didn’t want to show ya’ll that, all right? They trying to sell this narrative that Bahamians were clearing down the trees and they were taking the trees from the Bahamians - that is not the truth.”

In a brief meeting between Mr Bain and the Minister of National Security, Munroe said anywhere that people are illegally occupying public property, the government will clear them.

When asked by Mr Bain exactly what he was going to do about shanty towns, Minister Monroe had this to say.

“This property is the property of the Bahamian government, the Bahamian people, not some of them, all of them. And so, governments are elected to decide how public lands are used. If you don’t like how we do it, then every five years you do a verdict on it, but in the meantime, we will insist that people obey the law.”

Is Mr Munroe saying Bahamians just need to shut up for 5 years? The New Day comes with duct tape?

Are the farmers not cutting down large swathes of the pine forests to clear land for arable use ? I suppose clear cutting of forests for agriculture isn’t considered deforestation but homeless people cutting some trees for shelter and subsistence is. Lincoln Bain our own home grown Bolsinaro.

Lincoln Bainsinaro? I like it,although the difference is that the Brazilian president was successful in getting elected, So many wannabe politicians in this country.

Lincoln is not a wannabe politician. He is a millionaire businessman who doesn't need to DO anything. However, he is upset seeing the Bahamas being snatched away from Bahamians by those who are snatching and those like you who apologize for the snatchers.

Cult? You assume that because someone agrees with a position Lincoln takes then the person holds Lincoln on high? That's pretty ignorant. I totally agree with Lincoln on this issue and admire what he is trying to accomplish. I also like what Lincoln did to finally get government to stop having Bahamians fill out that stupid immigration card many years ago. Do I agree with everything he does??? Not even close. Smarten up Dreamer.

The Lincoln Cult reigns, is what you utilized to say I'm ignorant? I didn't even state a position beyond the person's cult like behavior. Same as whenever people cite politicians in arguments as "They are doctors and have their own money, they don't need this, etc." is the Cult like behavior since it seems you require a bit more clues to understand.

Hopefully you won't too be waiving a firearm not licensed for protection in the bush as if some parody of a Golden Ratio meme.

If you need more contexts or clarifications, I am more than willing to help you navigate in the comments.

They're not cutting it down for shelter, they are cutting it down and burning it to make charcoal to sell. Maybe they can come to your house and take the wood and cement blocks out and sell them too? After all, they are homeless and need "subsistence ", so rules and laws dont apply right?

Bahamian farmers have been granted Crown land for farming purposes after going through the standard 20 year waiting process. Haitians only have to wait 20 minutes for their truck to drive there.

Government shouldn't own land unless it is being used for a government building, infrastructure or national park. Also, here is a crazy idea - divide up all the crown land and give it to the people as payment for all the years of crap we had/have to endure.

The crown minister overseeing the colony's national security would be in possession of more dire intelligence cables than about current stunts Comrade Lincoln Bain's up to' ... when there may not be a lot days before a never before seen massive exodus of fleeing Haitians set sailing toward the colony resulting from Haiti's government drawing closer on verge total collapse unless the US troops assume full control of everything Haiti. Has the premier ordered all Embassy staff to forthwith proceed back to the colony and hopefully an request of Great Britain's Naval ships was dispatched and on way arrive in the colony and in time to up strength we colony's national security.― Yes?

Well said and so, so, true!

Hey, isn't that a racist statement you're making? Aren't you just opposed to Haitians coming here because they're black? LOL.

My point is that at least Bahamians who dont want to give their country away cant be accused of racism the way whites can be in Texas with Kamala suggesting the rule is "If youre brown, turn around."

Kinda like the non-existent black on black crime in Chicago.

We are free to defend ourselves if we could only ever tire of the 2 repeating governments.

I am 100% with Mr. Lincoln Bain on this decades-old way out-of-control Haitian invasion problem!

The first thing we need to do is to demand all bilateral agreements and treaties made with Haiti be made public so we will know what asinine stupidy the PLP and FNM committed the Bahamian people to.

Let's not forget, that the stupid jackass PLP and FNM incentivized illegal Haitian migration by rewarding illegal Haitians $250.00 if caught and deported from the Bahamas! How the hell could they give away untold millions of taxpayers' money without ever consulting the people?

I don't believe ANYTHING coming from the PLP or FNM about NOTHING.

Mr. Lincoln Bain has the support of the vast majority of Bahamians and needs to find ways average Bahamians can donate to assist him with legal fees etc'.

For decades now Fwreddy Boy Mitchell has been the driving force behind the Haitianization of our country.

And whenever this subject becomes a real hot political potato, the corrupt political ruling class simply arrange a few token Bahamasair flights to Haiti with a few hundred of the many, many thousands of illegal Haitian nationals on board.

There is never a sustained and well coordinated long term effort to rid our nation of as many illegal Haitian nationals and their offspring as is possible given the grave economic crisis and national security threat they pose for The Bahamas and the Bahamian people.

Nobody ever asks where they get money from for food.

SP if Lincoln Bain had the support of the vast majority of bahamians then how come he didn't win his seat in the last general election?

Two different topics. One being this specific issue and the second being a vote for member of parliament.

Why do people in this country wait until a pot boiling over before they turn the heat down? ALL the issues, including deforestation, farmers issues, illigal immigrants, homeless people and make shift shelters, coal manufacturing and the makeshift firing range are national issues that need to be addressed without the smoke and mirrors. And whilst Lincoln Bain must be applauded, not only raising these issues, but following through to ensure something is done, he needs to tune down the theatrical antics. The firing of a high powered weapon and the shoving match with law enforcement (who apparently were at fault). Before someone gets seriously injured.

This immigration thing: Back in the 1960’s or 70’s the then Premier, Lynden Pindling, ordered a lot of Chinese nationals, who were in the country illegally to leave the country voluntarily or face being deported. Many had to shut down their businesses or sell them off to Bahamians. Some twenty years later, these Chinese nationals were able to return to the country, with their adult children, who had status in the country. And not only were the able to reopen and open businesses but could also sponsor other Chinese nationals to live in the country. And hence you see the growing Chinese population. A similar trend is happening among the Haitian population, where children of illegal immigrants have reached the age of 18 and can apply for status in the country. And older Haitians can apply to have their children, who are in Haiti and some are adults, come to the Bahamas. Some will say, well this is the law and this is how it is supposed to work. That may be true, but what will be the socioeconomic impact on this country in the medium and long term? Will the faces of Bahamians be changed yet again? And unlike the Chinese who mostly came back and opened businesses, the Haitian immigrants are of a lesser means and will be competing directly with lower income Bahamians for less skilled jobs. But a number of them have already infiltrated the construction industry. And because of their naturalized immigration status, they too will be able to open businesses and compete with Bahamians. So don’t be surprised if coal manufacturing becomes legal in the near future along with some controlled form of pine tree harvesting.

Unlike the Chinese, some will become elected officials and give Haiti and Haitians the things they need