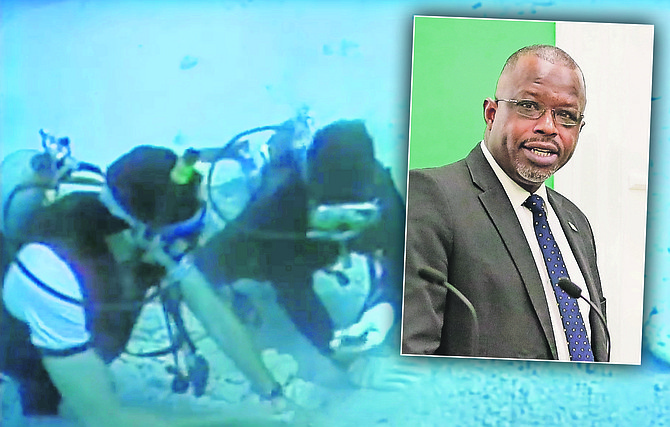 National Security Minister Wayne Munroe said the royalties the government has received to date from treasure hunters salvaging wreckages in Bahamian waters have been “unsatisfactory”.

Mr Munroe, speaking at the weekly Office of the Prime Minister’s press conference, said that while there are no licenses that have been approved by the sitting Progressive Liberal Party administration, admitted that there was one granted by the previous Free National Movement administration under Dr Hubert Minnis.

He also said: “The information coming is that there was one granted under the former administration, the whole way it operates is unsatisfactory.”

He continued, “It’s always unsatisfactory when somebody comes and says this is yours, without any sort of way to audit, confirm or evaluate whether what they’re giving you is what you’re truly entitled to.”

Carl Allen of Allen Exploration was given an underwater exploration/salvage license to search for the sunken treasure of the wreck of the Spanish galleon, Nuestra Senora de las Maravillas, believed to be off the coast of Grand Bahama and Walker’s Cay.

On March 8, 2021 a video clip recorded Mr Allen saying his company is already recovering “gems” and “pendants” from the ocean floor, although he does not give the precise location.

It is understood that the treasure hunting proceeds will be split 75/25 in favour of Mr Allen, as stipulated by the Antiquities, Monuments and Museums (AMMC) Act 2011, and the accompanying regulations. AMMC is thought to be working with Allen Exploration to document, assess and value what has been recovered from the latter’s exploration efforts. The AMMC declined to comment on the progress being made on the sunken treasure or any of its findings.

This is not the first time an attempt to salvage the Nuestra Senora de las Maravillas. The first attempt was in 1971 by a group of explorers but what they found was a mystery despite the government of the day granting them permission to search for the sunken treasure.

The second attempt was done in 1983 under a company called Marex International out of Memphis Tennessee, led by its chief executive officer at the time, Herbert Humphrey’s, along with the company’s vice president, Tim Hudson. They found treasure in silver and gold coins and several artifacts, remitted some to the Bahamian government but no one was able to track down who received the sunken treasure or what happened after the company left. Though, it is suspected that some of the artifacts went off to international auction.

The Bahamas Wildlife Enforcement Network, BOWEN, was created to monitor the excavation and exportation of fauna and flora of The Bahamas as well as natural wildlife and sunken treasure. “If it’s in our waters, it belongs to the Bahamian people and this is really an agency that’s going to be multifaceted for every natural resource, every single one, and it’s just so that we get value out of our natural resources,” Mr Munroe asserted.

The unveiling of BOWEN comes as a result of reports that poachers have been caught in protected areas clearing trees for charcoal without a license. The agency was created in mind to police these protected areas and also monitor the illegal trafficking of wildlife outside of The Bahamas.

BOWEN is a multi-agency task force under the command of the Royal Bahamas Defence Force Commodore, Raymond King who has appointed Lieutenant Commander Desiree Corneille to be the point of contact. The agency will be staffed with up to 40 people seconded from various government departments, inclusive of the RBDF, the Royal Bahamas Police Force, Departments’ of Marine Resources, Forestry, Customs and Immigration.

“A presentation was made to the Bahamas government to the cabinet and the Cabinet concluded that we will set up, organize and launch a robust enforcement agency to protect all natural resources.”

There is a property in question in the Carmichael Road area, Mr Munroe said that he and other law enforcement officials have seen evidence of individuals clearing trees in addition to quarrying soil without a proper permit.

Highlighting the national security implications of these unmonitored lands, He added: “We have seen illegal firing ranges on that property where we observed casings of some legal firearm shotgun shells, but also firearms that are generally only licensed and certified through our Royal Bahamas Police Force and Defence Force who have their ranges and we’re certain aren’t using those ranges.”

Legislation is being drafted to address these breaches and subsequent criminal penalties, for example if you break any of the laws you can be liable to seizure and forfeiture of any proceeds earned or equipment used in excavating natural resources without proper permitting. Mr Munroe also said transgressors have 14 days to stop their activities as authorities prepare to mount an aggressive operation in the area. “If you burn charcoal or protected plant, the resulting product in my estimation is a proceeds of crime. If you use heavy equipment, to breach the law, that may be subject to seizure and confiscation. This government is very serious. It does not concern us how long this has been happening. It will stop now,” Mr Munroe said.

There is no value on the estimated amount of charcoal or quarry being mined from these particular sites, but “calculations” are being done, said Mr Munroe

A wildlife enforcement network is a necessary for the protection of natural resources: flora, fauna, and flotsam. However, the AMMC, and the related laws applicable to it, was created as the agency which protected the rights of Bahamians in relation to shipwrecks and antiquities. If that enforcement has not worked how is a wildlife and natural resources agency going to do any better in this area? There are already laws which require Defense Force involvement and Bahamian representation aboard a foreign salvage vessel! Was someone paid off for that oversight? Surely fighting corruption and greed, and meeting the expectations the law requires, starts from within the failing agency? In the case of Carl Allen, the AMMC. Under the PLP a salvage license was issued to Bahamians in the 1990’s and satisfactorily led to the government auditing, evaluating, and acquiring 25% of the historic artifacts for a museum which are with AMMC to this day. It would appear that foreigner money gets prioritized over helping Bahamians, especially when the PM and the salvor were buddies from their youth!

Who is to say that pirates don’t go to these sunken vessels ‘ad hoc’ and raid them if even piece by piece. Just visit some of the marinas in the Northern Bahamas and witness the amount of marine resources being carted off. One person was actually supplying a restaurant in New York with fish caught in The Bahamas. Then he got caught. And whilst he got penalized in his own country nothing was done with him here. He wasn’t Bahamian, so no prosecution.

The agreement between Allen Exploration and Bahamas Government should be binding. Irregardless who's political party is in charge. Are we just trying to milk our the major investors for more or are we going to honour our agreements?

Does our Government and Minister Monroe understand how much Carl Allen did for Grand Bahama and Grand Cay post Hurricane Dorian? Millions of dollars that he voluntarily helped with. Get real Minister Monroe!

Was the help given to Grand Bahamas tagged with a “you owe me” or true philanthropy? Shame on those who believe in back-scratching “help” and legal immunity, and shame on those who enable that mentality. Help not freely and unconditionally given is not help…what shall we call it…;)

If the agreement is flawed then it should be set aside and rewritten. For too long carpet baggers have come to The Bahamad and ripped the country off.

Dumb, dumb, and dumber, Pindling, Ingraham, and Christie should be held 100% accountable for the asinine, unbelievably stupendous, failure to manage the peoples' affairs.

It would be interesting to discover what really motivated "supposedly intelligent" men to make such ludicrous agreements!

Unfinished and unwanted 9,000-passenger cruise ship to be scrapped Lower hull of Global Dream II to be disposed of after shipbuilder filed for bankruptcY