Parties to real estate deals that are in process could enjoy tax savings worth five-figure sums if they close - and bring their documents forward for stamping - on or after July 1, it was revealed yesterday.

Both Senator Michael Halkitis, minister of economic affairs, and Simon Wilson, the financial secretary, told Tribune Business that conveyances for property transactions valued at between $100,000 and $999,999 will attract VAT at the lower tiered rate that takes effect when the new fiscal year begins because the tax only becomes liable for payment when those documents are presented for stamping. 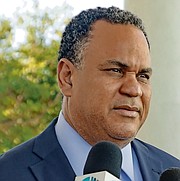 Uncertainties surrounding the transition to new VAT rates and regimes have bedeviled realtors and attorneys, not to mention their buyer/seller clients, on an almost-annual basis given how frequently the Government alters real estate-related taxation. As a result, this newspaper yesterday asked Mr Halkitis whether deals in process now, but whose conveyances are completed and presented for stamping after July 1, will attract the present 10 percent or the new regime’s lower rates.

He replied via What’s App message: “When the documents are presented for stamping after completion of the transaction is the determining factor.” Asked to clarify that this meant live transactions, which close after the 2022-2023 fiscal year begins and are brought forward for stamping and VAT payment then, will be taxed under the new structure unveiled in the Budget, Senator Halkitis said simply: “Yes.”

Mr Wilson, the Ministry of Finance’s financial secretary, echoed Mr Halkitis in saying: “Once it comes into effect they pay the lower rate. It [the VAT] becomes due and payable once they present the document. It’s not the sales agreement; it’s the date on the conveyance. It’s the date when that’s presented; that’s the most important date.”

Nikki Boeuf, the Bahamas Real Estate Association’s (BREA) president, yesterday told Tribune Business that the transition provisions unveiled by the Government were “positive for the clients in question because they get the better rates” on transactions valued between upwards of $100,000 and below $1m.

When past real estate-related tax changes were made in the Budget, she explained that “anything that was in court you had to usually apply to let them [the Government] know it was closing any day now”. She added that complications could easily arise if the closing period dragged out beyond a certain date, and said “it’s always been a little loose in that regard” over how the transition from one tax regime to another is managed.

The Government is also introducing a tiered scale for VAT payable on property transactions below $1m. While persons buying property valued at less than $100,000 will still pay the current 2.5 percent VAT rate on the sale/purchase, those acquiring at a price between $100,000 and $300,000 will now pay 4 percent.

MIke Lightbourn, Coldwell Banker Lightbourn Realty’s president, told Tribune Business that the potential tax savings from closing and paying the due VAT after July 1 represent “a hell of a difference in what people are going to pay”. As an example, he said the parties involved in a $200,000 transaction will now incur an $8,000 VAT liability at 4 percent when, under the regime that will end in a week’s time, it would have been $20,000.

This results in a $12,000 saving which Mr Lightbourn described as “great news”. He added: “It’s a saving for a lot of people having a touch and go time to put funds together to complete a purchase. The minimum you will save is 1 percent. It represents a big savings, particularly to Bahamians.

“It’s very important that was clarified, and any conveyance presented after July 1 they pay at a lower rate on a transaction between $100,000 and $1m.” Meanwhile, David Morley, Morley Realty’s principal, lamented that successive administrations too often only looked at how to implement Budget reforms and tax-related changes once the Government’s annual financial plan passed both the House of Assembly and the Senate.

This left a very narrow in which to inform the private sector on how it will work. He added that, historically, Bahamian governments have always treated real estate sales agreements signed prior to July 1 as attracting the VAT rate and treatment in force at that time rather than letting it slide over into a new fiscal year - thus indicating that this year’s transition may break with the past.

Attorneys have traditionally rushed real estate transactions to a close before July 1 because, more often than not, the Government has raised the tax burden for their clients. However, this year the VAT rates for transactions between $100,000 and $1m are being lowered, thus meaning there is an incentive to delay completion and the presentation of documents for stamping into the new 2022-2023 fiscal year.

This is great and all, but how exactly do you balance a budget by decreasing income and increasing expenses?