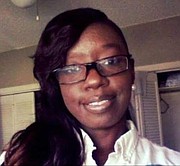 ROBERTHA Johnson lost her battle with cancer on Christmas Eve.

The late Robertha Johnson made history when she became the first female President of the Bahamas Alliance for the Blind and Visually Impaired (BABVI) last year. After taking up the post in April of 2021, she made a difference in the organisation, injecting her passion into various projects, always with a view of seeing more inclusion for people with disabilities and opportunities for their employment and advancement.

Her public calls for the rights of the blind and visually impaired were highlighted in The Tribune this past October during Blindness Awareness Month.

Sadly, Robertha lost her battle with cancer on Christmas Eve.

On Sunday, March 6, 2022, Robertha's involvement in BABVI and her historic ascension to the role of president were commemorated when an award was presented in her honour.

BABVI was celebrating its silver anniversary - 25 years as a support and advocacy group, NGO and civil society partner in the Bahamas. The event was held under the theme: "Reigniting Our Vision: Creating a better future.”

During the silver jubilee gala, awards and certificates of appreciation were presented. Robertha's award was received by her cousin, Cleo Sweeting, who was in tears as she accepted the award, remembering her as a loving, caring, jubilant person who loved her family.

All BABVI past-presidents were honored, including: Desmond Brown who has now been returned to the presidency; Anton Munroe; Spurgeon Neilly; Tyrone Johnson, Kendrick Rolle, and posthumously for Dana Thompson. He was one of the pioneers in blindness awareness and advocacy.