STATESIDE: ‘Subtext’ in the crisis in Ukraine 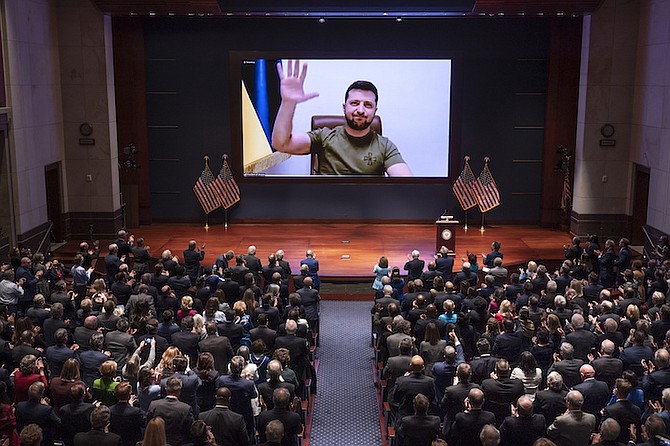 UKRAINIAN President Volodymyr Zelenskyy speaks to the U.S. Congress by video to plead for support as his country is besieged by Russian forces, at the Capitol in Washington, Wednesday. (AP Photo/J. Scott Applewhite, Pool)

ELAINE is a New Yorker who has travelled extensively and worked overseas, including in the Caribbean where she fell in love with The Bahamas. She is definitely “woke.” To describe her as a fervently liberal anti-Trumper is a huge understatement.

“Perhaps the only good thing that has come out of this whole Russian assault on Ukraine is the degree to which it has provided emphatic support for the notion that Donald Trump was a selfish, willfully ignorant moron whose public worship of a cretinous thug like Vladimir Putin exposed his startling lack of qualification for the post of presi-dent of the United States,” Elaine explained the other day.

Elaine makes no secret of her enthusiasm for “cancelling the culture of fools like the entire Trump family and the sycophantic villains in the Republican party who bow down to him in venal if hopefully superficial and transitory obeisance.”

Her point of view is abundantly clear.

This is all to provide context for what she said next.

“You know,” she began over a cup of coffee mercifully without masks, “I have to confess something. When I look at the images of these poor Ukrainian refugees fleeing their country, and enduring almost unimaginable suffering from the Russian assault on their country, I can see myself and my family.

“I see mothers bundled in their puffy coats. I see five and six-year-olds pulling their little rolling suitcases along behind their mothers on the way to the relative safety of Poland or wherever. They are all wearing knit hats, many with pompoms on the top. Many are clutching cherished pets. These people are all white. They look like me. They look like some of my neighbours.”

Elaine was aghast, mortified at her own revelations. “I feel the agony and despair of these Ukrainians in personal, intimate ways that I cannot feel the misery of, for example, Haitians or Palestinians. I’m not saying that I don’t feel badly for Haitians or Palestinians, who are obviously also suffering terrible hardships and tribulations, and whom I support by financial and rhetorical means. But, God help me, it’s not the same.”

When Ukrainian president Volodymyr Zelensky addressed a joint session of the American Congress yesterday at the very unnewsworthy hour of 9am via video conference, there were indications that he understands Elaine’s point of view. Zelensky, an experienced actor who is giving the performance of a lifetime before the eyes of the world, is simultaneously setting himself up for both a Nobel Peace Prize and an Academy Award. Zelensky is giving a new, enhanced dimension and meaning to the notion of rising to the occasion.

His appearance before the Congress, in some ways like his earlier appearances before British and Canadian parliaments, subliminally appealed to the whiteness and Europeanness of his audiences. And while the words of his appeal for more assistance from the West in his country’s existential struggle with his invader are couched in universal terms, there’s a subtext. That subtext is that he is a European speaking to other Europeans.

The Ukrainian president is not only an orator with gifts not seen in the White House since at least the days of Ronald Reagan (perhaps not coincidentally, another actor), but Zelensky also has some talented speechwriters and editors. As he had evoked Winston Churchill in his remarks to Parliament, Zelensky vividly recalled for his American audience the horrors of the 9/11 attacks on New York City, Washington, DC, and the American sense of impregnability. He also made reference to the Japanese attack on Pearl Harbour 60 years earlier.

But among his many achievements, this Ukrainian leader has, perhaps most amazingly of all, survived so far. One would imagine that Putin and his generals must have devoted quite a bit of time to figuring out how to get Zelensky out of the way, inasmuch as he personifies the dogged, indefatigable and inspiring continued Ukrainian resistance to the growling Russian bear in its midst. Putin’s failure so far to martyr Zelensky is emerging as a powerful symbol for the Russian’s inability to subjugate his neighbour.

The Russian invasion of Ukraine was launched three weeks ago. During that time, an estimated 2,863,000 Ukrainians have left the country for hopefully safer lives as refugees. Most have left family members and other loved ones behind, as well as virtually all of their worldly possessions. Their plight has captured the world’s attention.

The New York Times published an interesting analysis the other day, comparing this flood of refugees to others in the past forty years. Their researchers found that in just the past three weeks, the Ukrainian total has nearly reached the total outmigration of Venezuelans during the entire year 2017-18.

We’ve all been drawn to our TV screens and computers to follow the latest horrific and heroic developments from Ukraine. But have you been tempted by the amazing variety of sports-related distractions on offer during the same time? Here are some of them, including the first one which concerns both sports and politics:

At first, only English Premier League fans would have noted that the owner of Chelsea FC in London, after outcry in Parliament and elsewhere, was sanctioned by the British government. Roman Abramovich, a Russian oligarch who has reportedly enriched himself to the tune of some $13 billion by his friendship and allegiance to Putin, has now seen his football club put in financial chains by the UK government.

Not only can Chelsea no longer sign new players or extend the contracts of current ones. They cannot even sell tickets for matches this season anymore. The British government justified these measures.

A document released by HM Treasury’s Office of Financial Sanctions Implementation described Abramovich as “a pro-Kremlin oligarch” who was “associated with a person who is or has been involved in destabilising Ukraine and undermining and threatening the territorial integrity, sovereignty and independence of Ukraine, namely Vladimir Putin, with whom Abramovich has had a close relationship for decades”.

“These measures,” said a spokesman for British Prime Minister Boris Johnson, “are obviously designed to punish Putin and ensure any revenue generated cannot make its way through to the Russian war machine.”

Chelsea, the current reigning world and European men’s club champions whose women’s team is also collecting trophies, is trying to negotiate a way through this thicket while maintaining its third-place standing in the Premier League and progress through this year’s Champions League.

It is anticipated that PM Johnson will find a way to placate Chelsea’s millions of fans, many of whom defiantly hoisted a banner at its last game praising “The Roman Empire” of success bankrolled by its Russian former owner.

But consider the other tantalising distractions sport presently offers:

There was a picture the other day of the greatest of all time NFL quarterback Tom Brady smiling alongside greatest of all time soccer goal scorer Cristiano Ronaldo at a Manchester United game where Ronaldo set his record. Two days later, Brady ended his 40-day retirement and rejoined the Tampa Bay Buccaneers.”

Super Bowl winners Russell Wilson (traded by Seattle to Denver) and Aaron Rodgers (staying in Green Bay) figured out their futures. Superstar QB Deshaun Watson was not indicted by a Houston grand jury for alleged sexual misconduct in massage spas and immediately attracted at least four teams willing to trade a king’s ransom for his services.

The Major League baseball season is back on after owners and players agreed to a new contract. The full season will begin a week before Easter and the entire schedule will be played. As part of the settlement, the designated hitter rule will finally be employed in the National League.

The most wide-open American college basketball playoffs in years began this week. March Madness will see the final appearance on the men’s tournament sidelines of Duke coach Mike Krzyzewski after 42 years and five national championships.

And after the stunning recent trade of James Harden from the Nets to the 76ers in the NBA, both teams join the front-running Miami Heat, defending champion Milwaukee Bucks and resurgent Boston Celtics in a suspenseful run-up to this year’s playoffs.

Charlie Harper a Socialist Democrat bootlicker. As evidenced by the Elaine story, Charlie Harper is just another lazy "Columnist" who can only resort to bashing a President that has now been out office for well over a year.

The Tribune can and should do better than this.

My God liberals are stupid. What does Ukraine have to do with Trump? He's not in office remember? Hasn't been for more than a year now. Also Trump was not wrong in taking a stance that Russia and the US should be friendly and work together. Peace through strength, the same tactic he used with North Korea. And the world was mostly at peace then. Now look, since the incompetent Democrats took over everything is falling apart.

Well, we can thank Trump for 4 years of peace. Something quite exceptional for a US President. His predecessors all started wars that ended in total disasters, as we have seen in Afghanistan. Of course, there was never any condemnation by the "international community" as these wars were conducted for the good of “humanity”. As for Putin he knew too well that he could not pull something like this Ukraine invasion with Trump in charge. He waited for a weak US President to be in place to make his move.

I really miss the good old days when people had nothing to complain about except for “mean” tweets.