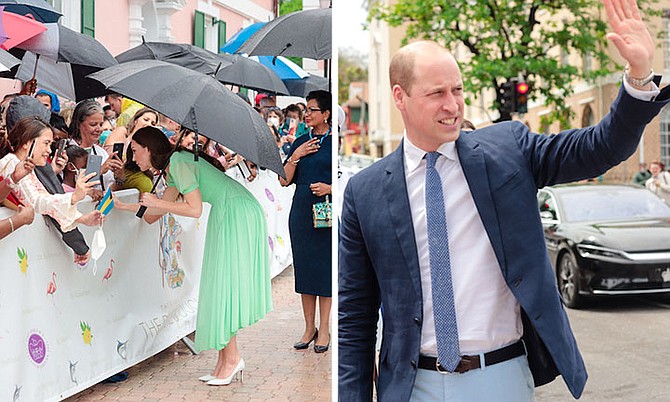 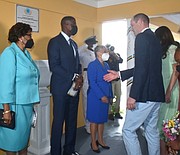 The Duke and Duchess of Cambridge enjoyed participation in the Regatta at Montagu Bay on Friday, a race of five Class B boats. (BIS Photos/Patrick Hanna)

THE Duke and Duchess of Cambridge soaked in Junkanoo and greeted admirers Friday afternoon during a trip to Parliament Square.

Intermittent rain, which threatened to spoil the event, did not stop a crowd of mostly tourists from seeing Prince William and Kate Middleton as the celebration of the Queen’s 70th Jubilee brought them Downtown, following their visit to Sybil Strachan Primary School.

Few Bahamians attended the event. One who did, nurse Alkithia Colebroke, said she will “always” remember talking to the Duke as he walked past the House of Assembly and spoke to several of those assembled.

“I had a chance to talk to the Duke,” she said. “He asked me who I was, where I worked. I’m a nurse and he asked me how Covid was. I told him everything is on the go down now, everything is going good. He said that sounds great.”

The arrival of the Royals downtown was considerably behind schedule. Two American residents of Kentucky, Tim and Mixie, were among dozens who waited a long time for them to appear but missed them because they were standing on the wrong side of the street. The pair said they wished there had been better communication around the event, which they only stumbled upon after their arrival in the Bahamas on Thursday.

The tour has already sparked debates about whether the Royals, who come from a privileged family with a colourful legacy, including the world’s history of slavery and colonialisation, should be welcomed at all.

For Bahamian Jerry Colebroke, the answer was easy. “I'm a fan,” he said, adding he had no complaints about the delay or the rain despite arriving well before Prince William and Kate. "I came here for what they had. The rain, it’s only water. It was an excellent event. I haven’t heard Junkanoo in so long, that was the most we’ve had in a long time and I was glad to be here for it.”

The scene at the Governor General's Reception.

Later on Friday, the Duke and Duchess attended the Governor General's Reception at the Baha Mar Convention Centre.

http://thetribune.media.clients.ellin...">Masks required for us but not her by immigrant

I am still trying to find the press around the world that is carrying and giving all this publicity to the Bahamas based on the visit of the colonial slaveholders.

This would be great if they gave a damn and appointed a Governor General that was not party affiliated and they advised him on all "consultations" with the PM that the Constitution requires, instead of always having ceremonial rubber stamp lackeys.

We will see if they are lackeys too or if they're gonna take the bull by the horns and help us in that way.

With the reef they probably talking about giving money. It does no good to give money to the Bahamas - there is never any accountability. The people never see these "grants".

it would have been wonderful if they were able to visit one of our beautiful beaches and get some sunshine.