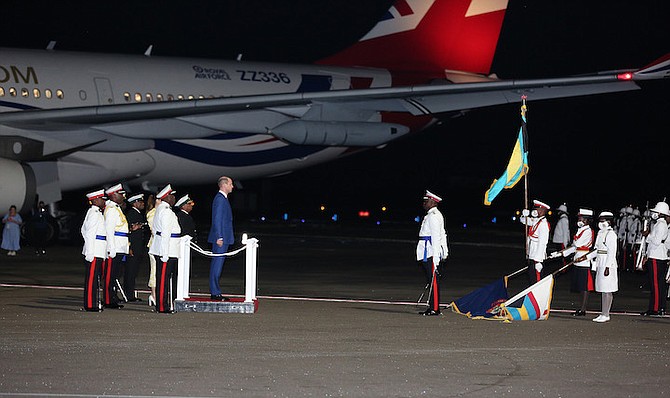 The Bahamas bid farewell to Prince William and Kate, the Duke and Duchess of Cambridge, on Saturday night after their visit to Abaco and Grand Bahama – the last leg of their trip.

It was the end of their tour of three countries in the region – which also included Belize and Jamaica – for the Queen's Platinum Jubilee celebrations.

During their time in the capital, the Duke and Duchess met the Prime Minister, spoke to school children, greeted frontline health care workers, watched a Junkanoo parade, sailed in a regatta; and were hosted by the Governor General to a 'glitz and glamour' reception.

Government officials bid farewell to the Royal Couple at Lynden Pindling International Airport ahead of their return to the United Kingdom.

Notes of "colourful" Poetry remain be written of a sun-drenched colony's out islands paradise with zero evidence throwback Africa, where the native colonists hearts at secret peace be carving out an little piece of England on this Atlantic side of the English Pond.
“Long live the future king. May his reign last forever. May his strength...Fail him never.” and inherited he Dukedom, Prince George of Cambridge, ― Yes?

Why are all of these people jockeying for the limelight morbidly obese? That should be our number one sustainability goal. To live diabetes, heart disease, stroke and hypertension free. It is inexcusable for all these men and women to be dressed in military ceremonial wear and have 50" waistlines. They're in the military, don't they have any physical fitness requirements?

@Comrade ThisIs, the newest resident on our block the colourful Comrade *Big Sister Titti"* says, what's even more slippery inexcusable is despite her 6' 2" and her having a waistline but 33" and her own supplied English issued Drag Queen's military officer's uniform,** her request join in to Bid Farewell to the Duke and Duchess was outright rejected by the office of premier's chief press briefer "Big Fella" Clintee Watson, ― Yes?

"Well hosted". Based on what? I'm not saying it wasn't, but what objective criteria did you assess to determine "well hosted"? The only criteria I heard was "we would see WOW". Did you witness "WOW"? We have balls every year, regattas every year and police escorted luxury vehicles fly around town quite frequently.

We have a tendency in the Bahamas to just say things and make it a false reality... in our minds

I thought flags werent supposed to touch the ground. Not sure

... they should not touch anything below them, but with "independence", came the loss of decency, propriety and protocol. In fact this nation lost far more than it gained through independence!

Protocol allows for such marks of respect. Done every Remembrance Sunday. This is not unusual.

Note clearly it is not the national flag that is touching the ground.

Ok, from all the points, this is ok because its not our national flag?

This couple are “influencers”. Do we want influencers? I suggest our economy needs them and they should start taking their family vacations here, buy an island and hire only Bahamians, patronize our economy, help to buffer us from the pressures of mega-corporate interests, be our “friends” through hurricanes, climate change, economic crashes. Etc. This is how reparation is made, not some personal handout to a people who would likely never invest it in their own micro economy to help build their independent nation. What was slavery?….big business with government support in making mega profits! Does this exist today? Covid taught us that it is alive and parasitically sucking the life out of people still; and with government support!! Change the paradigm.

A very good looking and classy couple. I hope they enjoyed their stay in The Bahamas and hopefully they will return one day, as King & Queen!

I guess we could at least thank the Royal couple for the few short days that they distracted the corrupt and incompetent Davis and Cooper led PLP administration from their primary mission of continuing to tief as much as they possibly can for themselves from the Bahamian people in the course of selling the best that our nation has to offer to corrupt foreign owned enterprises.

It was a wonderful visitThe Royal Couple mixed with all the Bahamian people so well. The publicity overseas has been so positive for our country. Let us be proud of our history and heritage. We should be thankful for our inheritance from the U.K.of a free parliament and our legal system. Bahamas is a safe place to invest as a result.