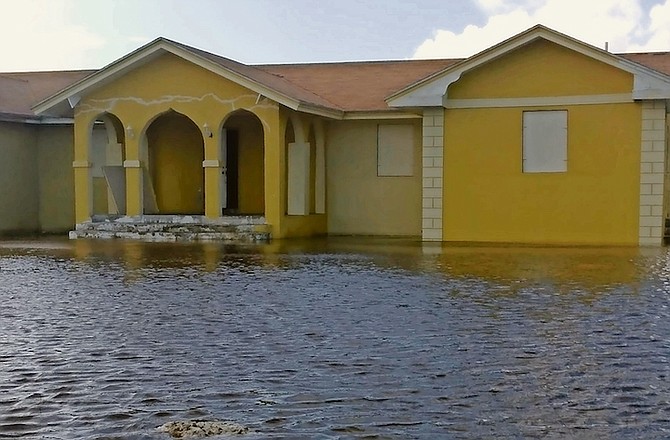 GRAND Bahama and Abaco avoided significant damage during the passage of Hurricane Nicole - with Acting Prime Minister Chester Cooper saying yesterday: “It looks like we have been spared the worst of it.”

The Minister for Grand Bahama, Ginger Moxey, said it was expected that the airport would reopen by last night, with only some debris to be cleared.

In Abaco, there was some flooding at the port and at Leonard M Thompson International Airport, but no serious injuries were reported following the storm.

Some businesses in Green Turtle Cay remained without power yesterday.

Molly McIntosh, general manager of the Bluff House Beach Resort and Marina, said: “Nicole was stronger, certainly than I thought it was going to be... we had a little shock here, because it was stronger and longer than we thought.”

"“It looks like we have been spared the worst of it"

Why do we let them get away with this every time??

These photos remind me of the US news reporters who stand beside a destroyed clapboard lean-to in the middle of a flooded valley to demonstrate how deadly the winds were. After decades everybody knows if we have heavy rain Nassau downtown will flood, if we have hurricanes the coastal roads will get overtopping and some roads will crumble, fishing hole bridge will be impassible, glass window bridge impassible. Everybody knows. Did we experience damage beyond that?

Remember when the Christie administration kept using hurricane Matthew as the cause for why nothing could get done? This is like that. Every approaching storm gets the same panic response no matter what the information shows because "Dorian" and if you point it out you get, it's better to be over prepared, you live in Nassau you dont understand. We're enabling traumatized Bahamians to stay traumatized because what's a radar? who could have known, this could be Dorian. When in reality, how many storms have we had this year? How many were Dorian? The MET is now afraid to make obvious calls about impact because they could get blamed for not being dire enough so every storm gets these dire take cover warnings. This is unsustainable. Noone can predict every nuance of weather but my God we must be able to publicly state at least that a 70mph wind storm that people struggling to call a hurricane was never going to be "the worst".

When I read a storm warning that looks like Dorian I'll be the first to run for the hills, until then take precautions suited to the risk. It saves time and money.