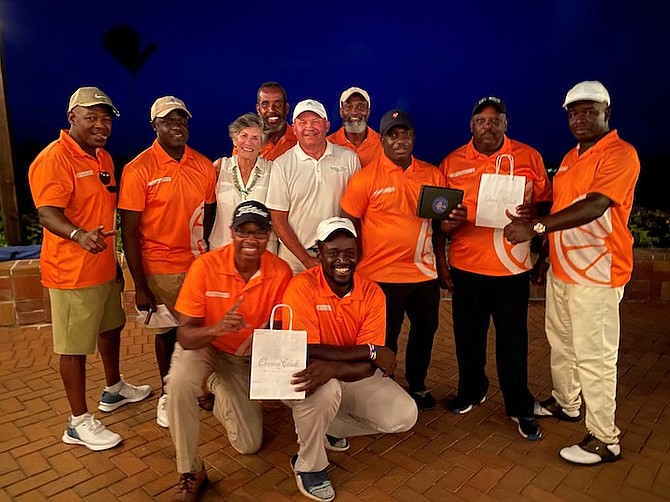 FIDELITY pulled off a sweep in the Bahamas Feeding Network golf tournament. 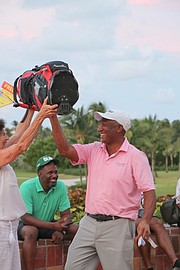 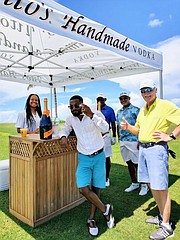 THE TITOS Handmade Vodka stall livens up the golf event.

NEARLY 100 players with an appetite for golf and a desire to support a worthy cause turned out for the inaugural ‘Tee off for Hunger’ golf tournament at Ocean Club Golf Club recently, helping to raise more than $70,000 in sponsorships, prizes and donations for the Bahamas Feeding Network.

“It was a great day for golf for a great cause,” said Felix Stubbs, chairman of the Bahamas Feeding Network, the tournament’s beneficiary.

“We want to thank all our sponsors, volunteers, those who donated prizes and in other ways lent support to help make this tournament a success and to ease the pain of hunger for many.”

The Bahamas Feeding Network, formed in 2013 with a handful of churches, now provides 72,000 meals monthly through a network that supports nearly 100 soup kitchens, church feeding centres and other organisations.

Its annual budget runs more than $2 million with only a tiny fraction used for administrative costs, thanks to a patron who absorbs expenses, including rent.

But on this Sunday, under a clear blue sky and the shimmering ocean waters for a backdrop, the spirit of giving was matched by the drive to win.

Players had their eye on the prizes – a brand new Mercedes Benz for a hole-in-one on the 12th hole, a seven-day Mediterranean cruise thanks to Royal Caribbean, a Dallas sports weekend inclusive of box seats at a Dallas Cowboys game and round of golf at a famed Texas course, thanks to the Beck Group which also donated courtside seats at a Duke men’s basketball game.

“The prizes we got donated were amazing,” said Mario Carey, a BFN director and tournament host. “Sports weekends, Mandara Spa treatments, MacFit membership, fine dining experiences including Graycliff, Sapodilla and Café Matisse, resort stays from Baha Mar, Grand Isle, Romora Bay and Stella Maris, and golf lessons and play at Albany and Atlantis all on the line – and I think it was because it was such a worthy cause.”

Carey, a golfer himself, said the level of play was extraordinary.

More than a quarter of the players came in at par or below.

Mark Carter, a volunteer who helped organise the tournament, was closest to the pin prize on that hole-in-one, beating out Phil Andrews by three inches.

For BFN executive director Archdeacon James Palacious, the tournament’s success was a testament to the need that BFN helps to fulfill.

“When those who would even be competitors in a given industry or field come together for a worthy cause, you know the power of unity with a purpose, and that is what we experienced today --- a super group of people playing a game they love for a cause they respect,” explained Palacious.