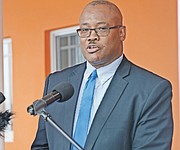 A sitting Cabinet minister and former prime minister have both voiced concerns surrounding “problems, problems, problems” with the proposed $63m Adelaide Pines project in which Albany’s developer is a minority shareholder.

Vaughn Miller, minister of the environment and natural resources, and Dr Hubert Minnis, MP for Killarney, both found themselves on the same side over a south-western New Providence venture that has pledged to create up to 300 full-time jobs via the development of an 180-lot community together with 19-25 spaces for commercial and light industry in a bid to attract businesses to the area and provide employment for residents.

The minister, who is MP for the Golden Isles constituency that includes Adelaide, voiced concerns that the project will be constructed on arguably the “largest water lens” on New Providence, while Dr Minnis raised issues about the increase in vehicle traffic that would result from adding some 180 homes to the area.

Mr Miller, speaking at the Town Planning Committee’s public consultation on Adelaide Pines, said he is “extremely concerned” that the project will sit on top of a “natural creek” that runs alongside the proposed site. And the man-made lake that it plans to create would “displace” the natural flow of that creek.

“This development sits on possibly the largest water lens in the island of New Providence. So we cannot think just for ourselves, you cannot think just for today. As the preamble of our constitution states, we must think for those persons who will inherit, or succeed or be our successors, as we can’t be just about us,” he warned.

Dr Minnis, meanwhile, focused on the increased residential and commercial traffic that would be created by Adelaide Pines given that this was already an issue for western New Providence given the ever-increasing development in the area.

“I’m not anti-development, but there are a lot of developments going on, especially in the Killarney constituency, and today we experience significant traffic flow problems,” he added. “In other words, if you want to come out of the area from Tropical Gardens, if you want to enter on to the main airport road between 8m and 10am, it is very, very difficult to get out.”

The Davis administration’s National Economic Council (NEC), which is really the Cabinet or a Cabinet sub-committee, approved Adelaide Pines’ acquisition of the 64-acre parcel that will comprise the development on February 7, 2022. The necessary Investments Board permit, as required by the International Persons Landholding Act, was issued for the $4.809m purchase of the site from Terry White, the US businessman who owns New Providence Development Company.

The project was also given the go-ahead subject to meeting all the environmental and planning permitting requirements. An NEC paper, dated January 13, 2022, revealed that Robert Myers, the well-known Bahamian businessman and Organisation for Responsible Governance (ORG) principal, and Albany’s corporate developer, Park Ridge Securities, are both minority investors in Adelaide Pines with equity stakes of 25 percent and 20 percent, respectively.

Pericles Maillis, the attorney and environmentalist, whose property adjoins the proposed Adelaide Village site, went into more detail on Mr Miller’s concerns. He told the meeting: “What is happening here is unprecedented. It’s mind-boggling. The developers proposed, and this is part of my formal objection, to obliterate the natural drainage channel. The wetland.

“We call it a wetland. We used to call it a swamp. In the rains, it fills up and tanks up with water. If it overflows... it goes over Adelaide Road, but it’s part of a great drainage system and it’s part of the freshwater lens. It goes all the way under Corry Sound and Coral Harbour.”

Mr Maillis also called for the Environmental Impact Assessment (EIA) conducted for the developer to be “peer reviewed” by an independent consultant because it has “major deficiencies”. He added: “I can tell you that the real deep water lens maps are not in here. They were not available to the team when they were doing it… It doesn’t show the true geology and the true surface, and below surface drainage.”

Mr Myers, addressing the Town Planning Committee consultation, pointed to the economic impact that Adelaide Pines will bring. “There’s immediate and long-term employment opportunities created through the construction and the ongoing services that will be provided,” he said.

“That being landscaping or plumbers, electricians on an ongoing basis in those households, a total of 179. Increased opportunities for Adelaide Village, driven by the influx of these middle income families.” Mr Myers also affirmed that Adelaide Pines’ target market will be middle income Bahamians and their families who work in western New Providence, and pledged that it will not be an extension of the high-end Albany community.

This, though, was challenged by Reece Chipman, the former FNM MP for Centreville, who voiced fears that Adelaide Pines will become an extension of Albany. Mr Myers, though, pointed to the developers’ plan to provide $1m for social and community development in nearby Adelaide.

Promising “a commitment of $1m to build the Adelaide Community Centre”, he added: “We would anticipate that that money will be earmarked, and we would suggest an Adelaide community committee that then determines where and what is built in the community because it’s obviously your community. We’re a member of it, but we’d prefer that decision not to be driven by us but by the people in the community.”

But Sam Duncombe, environmental activist and president of reEarth, who also lives in Adelaide, voiced scepticism over such pledges on the basis that previous developers have made similar promises only to fail to follow through.

She said: “As far as the $1m promise, please don’t make me laugh. We heard the $1m promise the last time Albany rolled in and cut through our beach. We were promised a community centre and a police station and this, that and the other. I don’t know what if any of those things have has been done in Adelaide, but I I’ve been living here for 15 years and I ain’t seen nothing yet.”

" Mr. Myers said rather than going into deep wells, the developers planned to treat the waste water from the development and return it to the water table after undergoing “a special process”.

This one statement alone should cause the authorities to nix this project.

Imagine, putting treated waste water, aka sewerage, back into the community water table, Mr. Myers you need to have a drink!