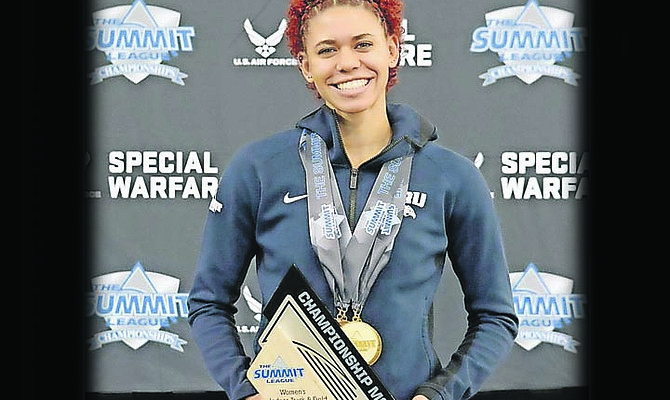 AS a tune-up to the Big Shots Prep Nationals this weekend, Deyton Albury had an impressive showing as he led his Believe Prep Academy to a championship title this past weekend in South Carolina.

Shepherd and JSU Tigers off to 0-2 start

IT has not been the kind of season that Iesha Shepherd expected as she completes her senior year for the Jackson State women’s tennis team.

CHARLES Bain’s scoring output since last week’s senior night has been his best stretch of the season to highlight play from Bahamian student athletes in NCAA Division I basketball last weekend.

VERSATILE Charisma Taylor turned in another impressive performance to lead a number of Bahamian collegiate and professional athletes in action over the weekend in various track and field meets around the United States of America.

BOTH Zane Knowles and Dwight Coleby are currently enjoying win streaks for their respective clubs in the Turkish Basketball First League with just a few weeks remaining in the regular season.

BJ Murray has established a reputation for electric starts on opening weekend and continued to build on that legacy to open the 2021 campaign.

SIERRA Donaldson, a junior on the Lee University Lady Flames tennis team, was elated to have been selected as the Gulf Coast Athletic Conference Female Athlete of the Week for the first time. “It feels amazing,” Donaldson told The Tribune after the GCAC made the announcement this week.

The Bahamas Softball Federation and the Bahamas Baseball Association both welcomed the news from Prime Minister Hubert Minnis that they can resume training and host competitions under strict COVID-19 rules and regulations.

CHARLES Bain celebrated senior night with his most productive performance in back-to-back games for the Robert Morris University Colonials.

Pagliaro and ‘Beau’ get set for the Endurance Worlds

Shard Munroe signs with the ValleyCats in Frontier League

SHARD Munroe officially signed with the Tri-City ValleyCats and joins the club in their debut season as a member of the Frontier League.

Bowleg and Team Bahamas touch down in Puerto Rico

Team Bahamas is set to face its toughest test in their FIBA AmeriCup 2022 Qualification bid this weekend in the third and final leg of the process.

Ayton and Suns squander 24-point lead in loss to Nets

DEANDRE Ayton and the Phoenix Suns nearly had a perfect ending to their six-game homestand, but squandered a 24-point second half lead in a loss to the New Jersey Nets on Tuesday night.