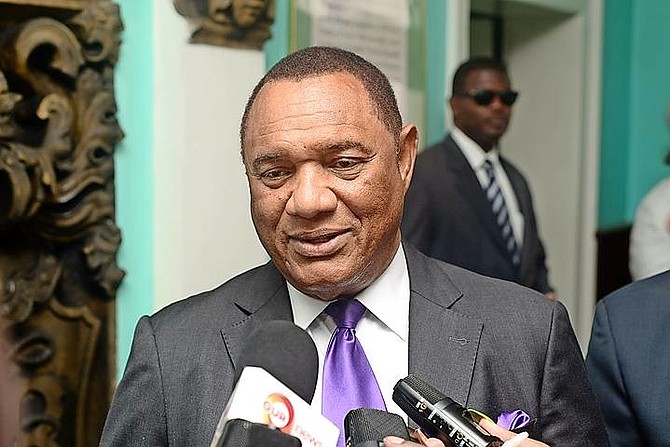 Govt on ‘course of correction’ after downgrade announcement

THE government is charting a course of correction and fiscal responsibility, Prime Minister Christie insisted earlier this week as he cautioned those who may be alarmed over the recent decision by international credit rating agency Standard & Poor’s (S&P) to downgrade the country’s credit rating to “junk” status.

PM: We must prove S&P wrong on downgrade

IN the wake of a downgrade by international credit rating agency Standard & Poor’s to “junk” status, Prime Minister Perry Christie said it is up to his administration to prove them “wrong” as he lamented the fact that S&P did not fully appreciate the “weight” of Baha Mar’s impending opening.

PRIME Minister Perry Christie yesterday sent a strong message to sidelined Free National Movement MPs Richard Lightbourn and Hubert Chipman to “resist with all your might” any attempt by the party’s leadership to end their careers.

PM: Baha Mar will be moving 'fast and furious' towards full development

PRIME Minister Perry Christie on Friday admitted that while his optimism over the stalled Baha Mar project may be “worn out”, he sees a prosperous completion of the property on the horizon.

PM: I can’t forgive songwriter for his insults to my family

PRIME Minister Perry Christie said yesterday that he does not think he can forgive the man who wrote an expletive-filled song about his family, which went viral on social media in August, although the singer tearfully expressed contrition.

PRIME Minister Perry Christie yesterday denied that his government was “misleading” the public by insinuating that “cookouts” will no longer be needed to fund people’s medical expenses once National Health Insurance is introduced.

PRIME Minister Perry Christie yesterday conceded that the June 7 constitutional referendum went “hopelessly wrong” and said he was “shocked” to be accused of having a hidden agenda that sided with the lesbian, gay, bisexual and transgender (LGBT) community.

AMID continued concern over the shuttered Baha Mar resort, Prime Minister Perry Christie revealed that two firms, one with ties to Bahamian investors, have been shortlisted as the court-appointed receivers of the project move closer to deciding which entity will acquire the $3.5bn West Bay Street development.

THE reactions of Progressive Liberal Party politicians to the failed gender equality referendum is a stark turnaround from the positions taken following the first attempt to change the Constitution in 2002.

Christie: I will not resign over failed referendums

PRIME Minister Perry Christie yesterday dismissed Fort Charlotte MP Dr Andre Rollins’ call for him to resign over spending millions on two failed referendums, saying the MP has “no currency with me whatsoever.”

PM does not know how much money Yes Bahamas campaign received

PRIME Minister Perry Christie yesterday defended his administration’s decision not to give public funds to organised opponents of the constitutional referendum, adding that he could not yet say how much money the government gave to the YES Bahamas campaign until an assessment of the finances has been done.