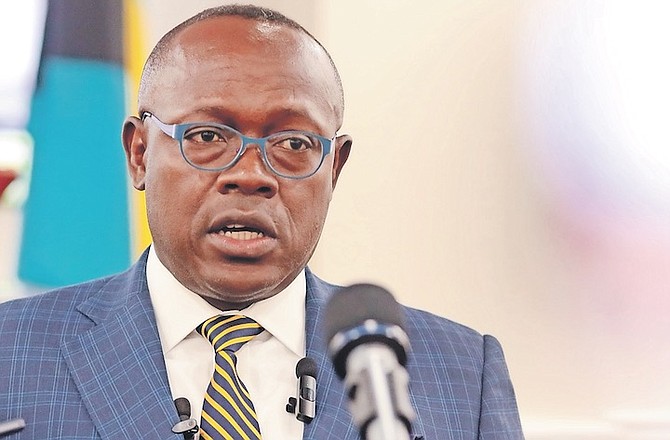 OVERALL visitor arrivals are projected to increase by 15 percent in Grand Bahama, Deputy Prime Minister and Minister of Tourism, Aviation and Investments Chester Cooper said while in Freeport this week.

Deputy Prime Minister Chester Cooper last night said the government will defend the country’s right to collect overflight fees in the face of threats by US airlines to stop flights.

Cooper: We will defend nation’s reputation

WITH the arrest of former FTX CEO Sam Bankman-Fried dominating international headlines, Acting Prime Minister Chester Cooper gave an assurance yesterday that the government will continue to protect the country’s reputation, while expressing confidence in the nation’s judicial system.

ACTING Prime Minister Chester Cooper yesterday hailed the National Investment Funds Bill 2022 as a “transformational” piece of legislation that will lay the foundation for public sector investing and reinvestment in support of the country’s national development goals.

‘Can’t rest on our laurels’ with 20% growth forecast

The Bahamas “cannot rest on our laurels” despite a 20 percent growth forecast for its tourism industry that is more than three times’ greater than the world average, the deputy prime minister is warning.

$10m damage but no injuries in cay blaze

DEPUTY Prime Minister Chester Cooper said the damage sustained in the structural fire on Monday at Over Yonder Cay, Exuma is estimated to be as high as $10m.

TOURISM Minister Chester Cooper said yesterday officials are working actively on the Downtown Revitalisation Project as developments are on the way and some dilapidated structures have already been demolished.

DEPUTY Prime Minister Chester Cooper yesterday expressed confidence in the Security Commission’s ability to handle matters related to FTX’s fallout, adding “we have had curve balls thrown at us before in financial services and we persevered.”

The deputy prime minister yesterday asserted that the Davis administration has approved $1.2bn in investment projects “for Exuma alone” in the year since it was elected as he touted a variety of resort developments.

THE Davis administration signed a heads of agreement yesterday with Azul Destinations Ltd and Calypso Cove Destinations Ltd for the development of an upscale resort and cruise port for South Long Island, estimated to cost some $250m.

Minister criticised over possibility of bringing theatre festival to Bahamas

TOURISM Minister Chester Cooper has drawn criticism from cultural activists over a recent meeting with Broadway producers about possibly bringing a theatre festival to The Bahamas.