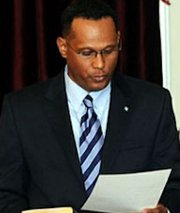 Speaking at a press conference at the Ministry of Grand Bahama, Lionel Morley, president of the Industrial Union, the bargaining agent for employees at Quality Services, said he was “elated that the ministers . . . showed tremendous resilience with regard to using everything in their power to ensure that both parties begin the process around the table as opposed to on the streets.”

He said that while negotiations placed his union “in a much better place,” he remains “cautiously optimistic” as this dispute goes as far back as 1983.

He is pleased, however, that the multilateral negotiations between Quality Services, the government and the union resulted in management agreeing in principle to rehire around 95 per cent of the recently terminated employees.

“We are pleased and delighted that these gentlemen understand the sensitivity, the sensitive nature in this environment, Grand Bahama,” Mr Morley said.

Mr Mitchell reiterated his government’s commitment to the policy of Bahamianisation and general fairness in commerce and trade as they relate to investors, their treatment of the Bahamian workers and respect for the labour laws and policies of the government.

“There is a feeling developing in Grand Bahama that Bahamians are looking through a glass at other people being prosperous who are not from the Bahamas but were enjoying the benefits of the economy while Bahamians suffer,” said Mr Mitchell.

Mr Mitchell noted that the PLP has repeatedly run for office on a platform of putting Bahamians first. He said the government has not forgotten the plight and complaints of many Bahamians.

Again in the 1980s the PLP picketed BORCO in a right to protect the upward mobility of Bahamian workers, he said.

Today, Mr Mitchell said, several companies in Freeport are on the government’s radar.

He said the Ministries of Immigration and Labour “have been asked to look through a microscope at the policies of these companies and the availability of jobs for Bahamians” in these companies.

Meanwhile, Minister Darville revealed the establishment of the National Training Institute in partnership with the industrial sector to address the skill set deficiencies in Grand Bahama that some argue are at the heart of these labour disputes.

This institute, the minister said, will go a long way in properly preparing and positioning Bahamians to take advantage of job opportunities in this industrial sector.

“We are very instrumental in reaching out now to the entire industrial sector to assure them that we have the academic acumen and labour force that is prepared for training and for them to partner with us here at the Ministry of Grand Bahama and the National Training Institute to start the necessary training to ensure that we build our labour force here in Grand Bahama to meet the need of the industrial sector.”