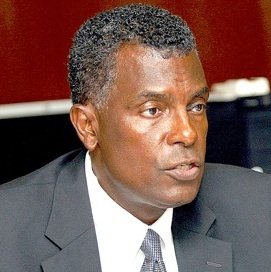 FORMER Immigration minister Branville McCartney was shocked at the government’s clamp down on work permits, which he said threatened to destroy the country’s hopes of an economic recovery.

The Minister of Foreign Affairs has used a regional summit with the European Union (EU) to hit out at “the unprecedented assault” on the Bahamas’ financial services industry, arguing that the sector was subject to regulatory standards that matched those in developed countries.

FOREIGN Affairs Minister Fred Mitchell warned those Bahamians who might be involved in a human smuggling ring that if they are caught, the “full weight of the law” will fall upon them.

MINISTER of Foreign Affairs Fred Mitchell has ordered his team to prepare a report on the disappearance of three nationals - two Turkish and one Jamaican - who were allegedly being smuggled into the United States via Grand Bahama.

Concern over residences of Ambassadors

THE Bahamian Ambassador’s residence in London is in need of “substantial repairs,” as are the residences in New York and Washington, DC, according to Foreign Affairs Minister Fred Mitchell.

FOREIGN Affairs Minister Fred Mitchell yesterday said the government was concerned with the potential impact changes to the Cuban exit visa policy could have on illegal migration, which he termed as the “most vexing issue” for Bahamians.

Electricity costs for Exuma resorts are “almost double” those faced by Nassau hotels on a per room basis, a Cabinet Minister identifying a host of infrastructure challenges as preventing the island from reaching its full economic potential.

MINISTER of Foreign Affairs and Immigration Fred Mitchell congratulated the new Chinese leader, saying the Bahamas looks forward to continuing working with the People’s Republic of China in an atmosphere of mutual respect and co-operation for the betterment of both countries.

AMID concerns that yellow fever vaccination requirements for incoming passengers to the country are not being enforced, Immigration Minister Fred Mitchell says that’s not the case.

FOREIGN Affairs Minister Fred Mitchell, speaking from the Dominican Republic yesterday, said the Dominican government and its armed forces are committed to assisting the Bahamas in stopping Dominicans poaching in Bahamian waters.

Minister to meet with Dominican Republic president over poaching

FOREIGN Affairs Minister Fred Mitchell will meet with the President of the Dominican Republic today as he and his delegation, including other Cabinet Ministers, continue their bilateral talks on Dominican fishermen’s illegal poaching in Bahamian waters.

Disgruntled investors have told the Canadian government that “the Bahamas justice system appears to be stuck in neutral” in handling their complaints over a $52 million real estate development, blasting perceived ‘inaction’ by both the current and former administrations.

Mitchell: signs of friction in FNM

FRED Mitchell, Foreign Affairs Minister, says there are clear indications of an “internal friction” inside the Free National Movement.

THE Immigration Department has reduced average work permit processing times by 50 per cent, the minister responsible said yesterday, telling Tribune Business that while the Government will be stricter than its predecessor in granting approvals it had “no intention of crippling the business community”.

UN address by Mitchell for Caricom

MINISTER of Foreign Affairs and Immigration Fred Mitchell delivered an address at the United Nations on behalf of CARICOM on Monday. Mr Mitchell was speaking at the Special Ministerial Meeting of the UN’s Economic and Social Council.

Mitchell thanks residents for helping Haitians

100 years of linking up with America

THE BAHAMAS-American Association Inc has announced its plans for the celebration of the organisations’s 100th anniversary.

THE Government has invested $250,000 into a new computer programme designed to speed up the work permit application process at the Ministry of Immigration.

Mitchell hits back at Laing criticism

THE “mismanagement” of the country’s economy under the former administration has led to $500 million deficit, Minister of Foreign Affairs Fred Mitchell said.

THE government yesterday passed a Bill to Amend the Immigration Act that will, among other things, eliminate the Permanent Resident permit limitation period of five years.

Foreign minister Fred Mitchell has urged the BDO accounting firm’s Western Hemisphere members to help “make the case” that international financial centres such as the Bahamas benefit, and not harm, major developed countries.

FOREIGN Affairs and Immigration Minister Fred Mitchell announced plans of a referendum to grant Bahamian women the same rights as Bahamian men to pass citizenship on to their children.

BAHAMIAN officials are in talks with the Haitian government over the return of a Pineapple Air plane reportedly stolen from the nation’s airport and flown to Haiti last May.