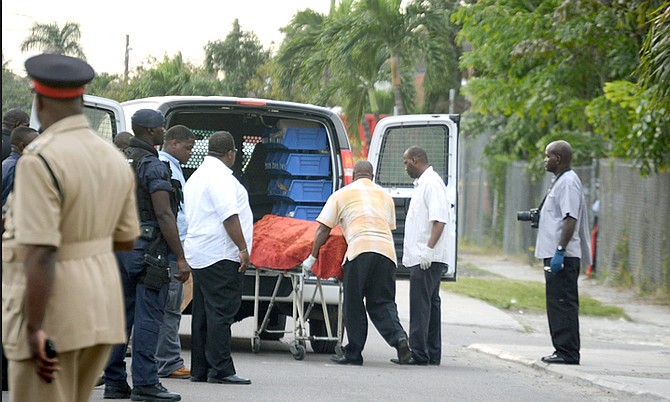 The body is removed from the scene in Nassau Village.

POLICE are investigating the year's 138th murder after a man was shot dead in Nassau Village Friday afternoon.

Police Superintendent BK Bonamy Jr said the victim was walking in front of his home when suspects pulled up in a vehicle and shot him, fatally wounding him.

"Shortly around 3pm police received a call of a male being shot at Alexandria Boulevard here in Nassau Village," Supt Bonamy said. "Officers responded and on arrival they met a male lying on the side of the road with multiple gunshot wounds to the body. EMS was contacted and after their examination they concluded that the male had succumbed to his injuries. Only information we have thus far is that shortly after 3.05 the deceased was walking on Alexandria Boulevard in the area and a black Odyssey vehicle pulled up and opened fire on him. We don't know the motive at this time but we want to appeal to people who may have seen something to give us a call."

Children on their way home from school were among those forced to wait behind the yellow caution lines as officers secured the scene.

Residents of the area identified the victim as Johnell Pierre.

Bonita Lindo, who said she was in a webshop across the street from the scene when the shooting took place, said the victim was the father of one of her grandchildren.

"My daughter just had a baby for him," she told the press as she lamented "another senseless killing”.

"The baby ain' even a month old. He have four children. The hurtful part is the children does be in the yard there. Suppose they did hit one of those little children? They have to realise they have mothers, they have sisters and these children could be hurt when somebody come back and do this so they have to stop this foolishness because, guess what, innocent would be suffering for the guilty if this don't stop. This blood they shedding ain' make no sense."

Although there was a larger than usual presence of heavily armed police officers at the crime scene, Ms Lindo claimed the police are never in the area to help prevent crimes and are only there to remove dead bodies.

"The police come when they ready," she said.

"I stop calling them. The man running the next man through Matthew Street with a gun," she claimed, recalling another incident, "I called and say 'officer, a gentlemen running a next man through Matthew Street with a gun, could y'all please come?' He tell me 'man y'all kill up one another. When y'all finish we'll pick up them in a body bag.' Now, that's anything for an officer to tell person? They wrong. What's going on why the police can't find the (suspects from various murders)? The police need to start doing something with Nassau Village, even if you have to put a bus on the corner here. They need to do something because this ain' making no sense. You could imagine you sitting in your yard, people pull up in your yard with a gun, you don't even know what's going on, but they shoot up your yard for nothing?”

I wonder if the PLP will put up a sign saying they now hold the record? You PLP lying scum said you had the answers on day one maybe it is time you state you just said that to get elected and the only thing you really know how to do is steal.

So is the body found in Palmdale today classified as a homocide or it not yet classified.?

I sympathize with the Commissioner because his hands are tied. He needs an island wide CCTV camera system, a better court system, a new prison that incorporates real prison reform initiatives like a university, and he needs a better primary school system. He needed all of these in place twenty years ago when the seed was young.

I didn't think the show of force was a good idea, I guess it was the only thing that could have been done immediately. But it's not sustainable, you can't be everywhere all the time, forever. Suppose you could, how many years has Jamaica had their military on the streets with assault rifles? That approach can only work if you have a population who respect the law. Our problem is we don't respect the law, from the cabinet minister down to the janitor.

I sympathize with him because he needs a "now" solution but the only solution I see is a mind solution, and that takes years.

Hi , gotta say I take offence to your comment, as it's very very insulting to janitors....... I'd suggest you rephrase you comment as follows: "Our problem is we don't respect the law, from the janitor down to the cabinet minister.

Hate to state the obvious; but it's abundantly clear that the politicians are not exactly the "highest" form of people, and deserve no respect unless they earn some.

I'm willing to admit a mistake and to take correction. You're correct! We can't look in the House and claim that the best of us are represented there