Mental Illness And The Health Of The Bahamas 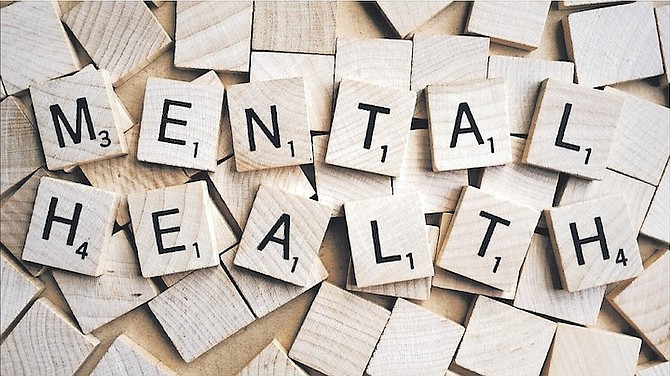 MENTAL HEALTH OF THE NATION

“Lunatic, bad head, crazy, they need to be locked up.”

These are still pretty common views of mental illness.

Stigma and prejudice are still where most people get their knowledge of mental health; the psychological issues facing the nation are swept into the background behind heart disease, cancer and infectious diseases.

It is my belief, however, that our bodies are one and mental and physical health are completely intertwined.

It is now two years since our son, Sean, was brutally murdered outside our home (there have been no arrests and no one charged) and nearly one year since our other son, Damian, was injured in a sports accident. It is fair to say that my own mental and physical health has taken a battering as life moved from a fairly idyllic existence to a major struggle for survival. I try to force myself from my pit of despair and when my head pops up and I can see out of the pit at the world around me I realise how many others are struggling on very similar journeys.

The shock, horror and anger seems universal, the lack of trust in the criminal justice system, the sense of betrayal making the raw anger even worse. The stories seem to overlap, leaving a sense that those in authority do not want the crime problem solved; there have been over a thousand murders in the last decade leaving a significant part of society floundering in profound grief and anger.

The numbers soar even further when other crimes of violence like attempted murder and rape are added to the list; the rage and despair is further fuelled by the bizarre attempts of politicians and the police to “blame the victims”.

The plight of the nation does not end there: traffic accidents, robberies and lost jobs also leave a trail of stress and horror. There has also been the devastation of hurricanes smashing the islands, leaving a trail of destruction in their paths.

It is really no wonder that the health of the nation is at major risk of total collapse both physical and mental. There is plenty of research showing the links between levels of stress and many diseases, including cardiac disease and cancer.

The object of this series is to focus more on the mental health issues caused by these disastrous events that are conspiring to bring us all to a state barely imaginable in the not too distant past. It impacts how we feel, it impacts the productivity and balance of the work force, and it causes mental illness, further eroding the very fabric of society. I intend to look at how our personalities and daily behaviour are affected by these internal and external forces and how this is impacting public policy here and on the international stage.

It seems that more and more elections are won by manipulating emotions rather than discussing issues or policies; there is less concern about things that could help the people and more reliance on fanning the raw anger that flows through the arteries of the nation. This has been made worse by “fake news”, “alternate facts” or old fashioned lies: the vast information highway has so much stuff out there that people seem happy to believe whatever they want to believe.

All this is adding to the ever growing anger levels as gradually the lies become obvious, but as one English politician said “the people want to be lied to”.

Famous leaders have had mental health issues that caused impacts on world affairs that remain with us indefinitely. I intend to write about some of these figures. It is also interesting to wonder what would happen here or to our neighbours if a seriously disturbed individual were elected to a major office. It would affect all of our lives – but can anything prevent this?

There have been so many kind and wonderful folks that have reached out and helped us as we struggle to make sense of our recurring crisis that I have hope for the core decency of our fellow travellers and hope for the future.

There is, however, a dark cloud that still hangs over the country and it brings to mind a poem by T S Elliot called ‘Wasteland’. He wrote “April is the cruellest month”. I think he was referring to his inability to enjoy the flowers that bloom in spring, due to the despair he felt at the breakup of his marriage. The Bahamas has great beauty all year round, but the dark, dank, destructive anger that ebbs with the tides makes the beauty invisible and every month becomes the cruellest month.

NEXT WEEK: Love is all you need

• Dr Mike Neville is a forensic psychiatrist who has practiced for more than 40 years in the Bahamas, working at Sandilands, the prison and in private practice. Comments and responses to mneville@tribunemedia.net

Hi, Dr. Mike. Kudos and courage to you in your circumstances. I do not believe in karma, or auras or spirits or any of those things. However, having said that, I feel the bad moon that has risen over the Bahamas. Just recently, I have an opportunity to make a prolonged and perhaps a final eventual exit from my homeland. I was filled with trepidation and anxiety. However once I boarded the plane and was airborne, I felt like a weight had lifted from me. I glanced out the windows, and saw the beautiful Berry Islands from the air, and it was a bit wistful, but I could not believe the sense of liberation that engulfed me as I went to prepare for the next steps in my life.

Perhaps, if I may be as bold to suggest, you need to get off the island for a vacation to regain your perspective. The sense of being in the light when off the island continued with me on my journey of discovery. And when I opened these online pages and saw the news and commentators, immediately a sense of darkness re-came over me. I felt like a needed a shower. These pages, like this country, can be like an addictive drug, but they really do not do a body good. Enlightenment and truth and totally gone from the Bahamas, except for small pockets that are hemmed in by dystopian darkness of our country.

In the Bahamas, we do not have a free society. We do not have a healthy society for either body or soul. We do not have a beautiful environment. Instead we have potholes, half-working stuff, a dysfunctional commercial and public sector milieu where we need to transact our daily lives and it adds stress. We do not have it easy. We overpay for substandard groceries and goods. We live in an ocean of mediocrity.

All of this becomes totally apparent when one physically transposes oneself to a healthier, happier environment.

I realise that the Bahamas is your home, but if you would consider advice from a know-it-all plebe, you really need to finish your grief and heal your soul in a more calm and restful place and find the samadhi and healing that simply cannot be found in this dark place. Peace.

banker - one of the bright notes in my daily read of the Tribune242 has been your insightful, often sharp-witted comments and observations about the Disfigured Beauty known as the Bahamas. Your pain over the continuing loss of the humanity and promise of your beloved country was always apparent under the surface of your observations. Sorry to hear, glad to hear, that you've found renewed lifehope in another geo area, yet it's understood that a big part of your heart will continue to grieve for Bahamasland. I get it. Should you ever find yourself in Vermont/SoCal, give me an e-ring: lunch and conversation. Both my wife and I appreciate your mind. swienckowskia@aol.com

Thanks for your thoughts. Once the moderators see an email here, they will remove your post. I don't think that I will make the Vermont locale -- however I have stayed once at a Vermont B&B called The Silver Fox. I like Burlington, although my last visit there was about 10 years ago when a Bahamian expat living in Canada drove me there to vacation. I tried the suicide sport of skiing. It was fun, but I'm afraid that this tropical head and body is ill-adapted to the cold and moving as quickly as one does down the slopes. SoCal is a different story. However, unfortunately, my new job will probably end me up either in Europe or the UAE where I will trade securities for family offices. If by a happy chance, I do end up in the US of A -- I have recorded your email address and will contact you should I find myself with the time and means to visit. Thank you.

I will keep checking back here for news of the Bahamaland when I leave. This place gets under your skin. All I have to do is see the emerald sea through the seagrape leaves, or suck on a guinep that I have bought from a street urchin, or buy a bag of "dark" roasted peanuts from the Rasta near the Village Road/Montagu intersection or buy a bag of stone crab claws from da ramp and it comforts me and makes me homesick and I haven't left yet permanently. I will spend a few months training in Paris and then get assigned.

I am fervently hoping that there is indeed a ray of hope with a new government and that this place transmutes itself to the wonderful place that existed the past that my relatives describe.

I am sorry for the death of your son. But do you have any idea as to who would want to harm your son.?? perhaps he never told you what was going on with him.

Truly empathetic Strachan. Well done. How can you even imply that there may be some sort of justification for cold-blooded murder. What sort of person are you? Please excuse me, Dr. Neville.

I totally agree with you banker. Well said, and good advice.

As long as the PLP exists............ there will be lots of mental illness in this country

The truth is I never said it is right to kill any human being. I for one hate it. It is my hope that some one the Father or any one else can think of some one or something to bring justice for his son. I trust his Father understood what I meant.

Banker is writing foolishness. because there is no heaven on earth. The Bahamas is not a perfect place. But it is the closes place to heaven. The whole world is in trouble because of the darkness in the hearts of man kind. many have turned away from The God of Abraham.

After all is said and done I LOVE THE Bahamas