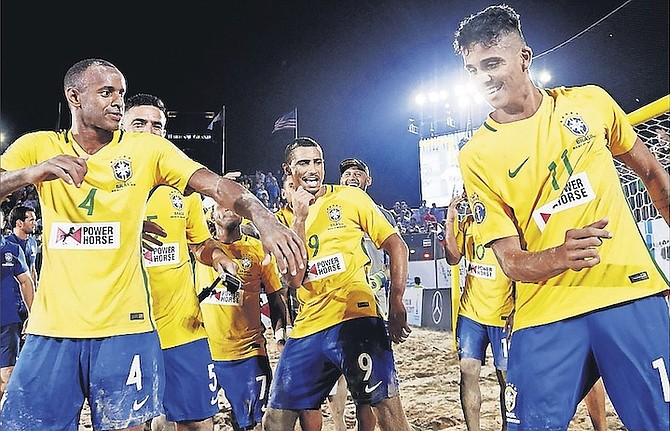 Favourites heading into the South American Beach Soccer Championship, Brazil lived up to all expectations, booking their place in the world finals in style by winning another continental title.

In the group phase ‘A Canarinha’ beat Venezuela 6-2, Colombia 9-5, Peru 11-0 and Ecuador 11-1 and then saw off Argentina 7-1 in the semi-finals. Though hosts Paraguay proved tough opponents in the final, the Brazilians dug deep to win 7-5 and secure their sixth South American crown.

Brazil seem to have regained their famous swagger on the sand in recent years and are intent on regaining the world title, having failed at the last three attempts.

While the ageless Mao remains as reliable as ever between the posts, the experienced Bruno Xavier is their chief creator, with Lucao also impressing in the qualifying competition, in which he scored ten goals.

Brazil is synonymous with beach soccer, with Copacabana Beach in Rio de Janeiro providing the birthplace of the sport and also the venue for its first four FIFA World Cup competitions. Only third at the inaugural tournament in 2005, ‘A Canarinha’ bounced back by winning the next four competitions, between 2006 and 2009.

They have failed to lift the trophy since then, however, taking second and third place respectively in 2011 and 2013 - with Russia landing the title on both occasions - and then losing 6-5 after extra time to the Russians in the last eight at Portugal 2015.