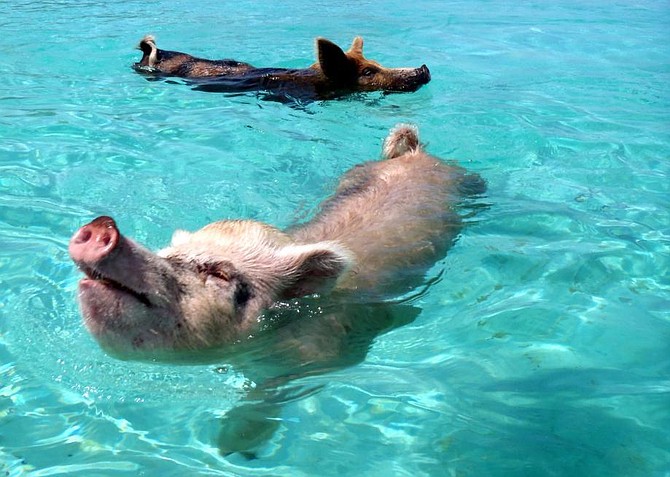 INVESTIGATIONS are underway to determine what killed a number of swimming pigs in the Exumas, according to officials at the Bahamas Humane Society (BHS) on Sunday.

Reports surfaced over the weekend about the deaths of more than half a dozen pigs, which have become known around the world as one of the Bahamas’ popular tourism attractions.

However officials have said the number of pigs that died remains unclear. The pigs were thrown into the sea after being found dead at Big Major Cay, on Friday, according to BHS President Kim Aranha on Sunday.

She told The Tribune it is unclear if the deaths were accidental or if the pigs were intentionally poisoned. She said that results from water samples collected from BHS and other teams may not readily be available.

“I understand there are seven or eight pigs still alive,” she said. “It’s still unclear on the number of animals that are dead. I’d say it’s more than seven but certainly not the 15 as initially reported on social media. The veterinarians are bringing the samples back but I can’t say how long it will take to get the results.”

She added: “It could just be a horrible accident where they ate something poisonous. It could be malicious but I don’t really see why someone would go out of their way to hurt those lovely animals. I know there are a lot of silly sailors that go and feed them alcohol to try and get them drunk but that’s not to mistake them with the tour operators based out of Nassau who have treated them with excellent care.”

Mrs Aranha said this tragedy “is not good for the economy or tourism because if tourists come and see dead pigs on the beach, it’s not good publicity for us”.

“It’s really a mystery as to what killed these beautiful animals. I believe most of the carcasses were in the ocean and we (BHS) did act as quickly as we can. I think everyone who is an animal lover is concerned and if not, for our economy, can you imagine what impact this could have?” she stressed.

Lee McCoy, owner of Harbour Safaris which runs tours from Nassau to see the swimming pigs, also confirmed that a team had been sent to investigate the cause of death, but said that results may not be ready until Monday.

When asked if there were likely to be negative ramifications for the economy, he said: “It’s not great for it but it won’t be devastating for the economy.”

NBC’s “Today Show” featured the swimming pigs of Exuma last June, in which “Today” correspondent Kerry Sanders traced the emergence of a colony of pigs on Big Major Cay.

Comrades! Oooiiinkkkk to BHS President Kim Aranha if it's just today she learned what I've been hearing via the bad vibes I've been long receiving from my most trusted swine source on Pig Island - about how the pigs, like the rest Exumanians - have long been getting the short end of the much promised prosperity stick.

kinda can't blame them for this, stop being silly.

they are guilty of any and everything all the time

"Pigs and swine are so poisonous that you can hardly kill them with strychnine or other poisons. Swine and pigs have over a dozen parasites within them, eg tapeworms, flukes, worms, and trichinae. There is no safe temperature at which pork can be cooked to ensure that they will be killed." . " Salt and chocolate are two foods you never want to feed to your pig. Pigs can acquire salt poisoning from having too much salt in their diets. In some cases pigs are highly allergic to chocolate." TOO MUCH SALT WATER?..where do they get drinking water from anyway? . "A pig’s digestive system—unlike a cow’s—is not designed to filter toxins from its system. These toxins work their way through the pig and are deposited in the animal’s flesh—especially in its fat. The pig itself is actually able to sustain very high levels of toxins. As such, it can eat just about anything. In an effort to keep feed costs down, pig farmers will purchase garbage, such as rotting meat and vegetables, to feed them—and the pigs can be sustained with it. There is nothing in the animal’s digestive system, or the processing of the meat, that removes these toxins.

The time it takes for these things to be assimilated is more interesting. For most animals, this is a much slower process, taking perhaps 12 to 24 hours. This gives an animal’s digestive system time to filter toxins, poisons and deadly parasites from entering the bloodstream and being deposited in its flesh. Also, because many foods can build muscle, greater time is required for that muscle to form.

The same is not true for a pig. Much of what it eats can be assimilated much more quickly. Not only does this mean that toxins are not filtered, but also most of the flesh takes the form of fat!" .. . " .Some of the “cleaning” features of the pig are remarkable. One is located under its hooves. Often referred to as poison ducts or running sores, these “sores” act as a conduit for poisons to ooze from the pig’s body. This is one reason pigs can eat poisonous snakes that would kill other creatures and not be affected themselves. These ducts, however, will often become “plugged” from the amount of toxins pigs must excrete from their bodies. If this is the case, a farmer must quickly slaughter the pig and send it to market before it dies. Accordingly, the meat from such an animal is riddled with parasites and toxins."

In Essence, What Your Saying Is Pigs Are likened To Corrupt Politicians?

Terrible situation. I truly hope "they" get to the bottom of this and resolve the matter with all haste.

The sheer volume of tourist to the site should have prompted "the powers that be" to have sense enough to implement some protective measures for these swimming pigs, even if it meant charging tourist or tour operators a minimal fee to cover the cost of Humane Society services and a warden of some type.

Obviously, this tour should be a properly managed shore excursion to ensure pigs are well taken cared of.

Perhaps useless, good for nothing, Obie Wilchcombe will get off his ass and sort this out before all the pigs die out and the Bahamas loses one more valuable tourist attraction! (wouldn't bet anything on this happening)

It is most likely SALT poisoning. Pigs did not get enough fresh water and so the salt water 'purified ' all the other toxins in their body and made them vulnerable to poison

I wonder if the tour people stopped bringing them food and water?

John I have no idea if you are trolling or just the biggest idiot I've seen in a while. Keep your pseudoscientific bs to yourself and let the educated people talk.

While tragic, the death of these pigs is not surprising to me at all. "pig Island" is nothing more than a managed tourist attraction that kills and exploits these animals for profit while maintaining an image of being some idealistic paradise for the animals. The pigs are routinely killed for food to keep the population around 20, the pigs likely have no steady source of food (gotta keep them running up to the tourists right?), they are subject to the brutal Caribbean sun with none of their natural ways to protect themselves... I could keep going but hopefully you get the point. This place is not paradise for then anymore then sea world or a zoo is paradise for the animals they keep.

I'm pretty sure that it was sunlight poisoning. The sand crystals on Pig Island are the wrong type. They do not hold the vibrational energy long enough to do a toxin cleansing in the dermis of the pigs. Also one must have a reiki master to mutter the correct incantations, according to prophecy (Akymalarchy part of the Book of Revelations). Also Bahamian salt is deficient of the 96 homeopathic elements required for healthy life. They should be using pink Himalayan sea salt.

The salt poisoning can be gotten rid of in the pigs through a therapy of ear candling of the piggie ears and chiropractor manipulation of the energy subluxations contained in the curve of the pig tail. That plus a dose of Anthroposophic medicine administered to the hams of the pigs.

I would start a Save-the-Pigs movement, but someone might confuse that as electioneering for the PLP.

WHY? would the "so called POISONED PIGS" be thrown into the sea for marine life such as sharks, fish, crabs etc to feed upon???

Lets talk about the tourists feeding fish cheese wiz at the Aquarium and sharks hot dogs and feeding the fish human food scraps.

None of this is good for the environment