Ferguson defends crime record but warns: Be careful about company you keep 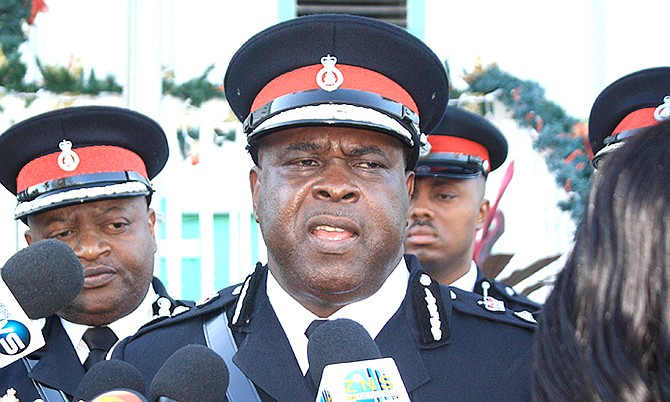 AFTER three double homicides in as many weeks, Commissioner of Police Anthony Ferguson issued a blunt warning to Bahamians yesterday: “Be careful with the company you keep.”

“I shall not go any further than that,” he said to the press. “Y’all are intelligent people.”

Kevisha Kerika Richards and James Johnson (inset) were shot in front of this home.

After each case, he repeated the same line: “It is very important that we know something about the persons we are in company with...I can’t emphasise that enough.”

Despite the recent flurry of criminal activity, Commissioner Ferguson insisted people should go out and have fun this Christmas season because they will not be targeted.

Commissioner Ferguson said police have people in custody they believe are responsible for the Joan’s Heights murders and are following significant leads with respect to the other double homicides.

He also said people are in custody they believe to be responsible for the death of Mario Cartwright, a husband and father of three small children killed in the Coconut Grove last week. Cartwright was shot when he walked into a convenience store during an armed robbery.

He said the alleged suspects are young and new to the criminal system.

“These are disorganised persons who are going around, once they have a gun in their hand and want to make a couple dollars, they will go and they panic and things happen,” he said during a press conference at police headquarters.

Asked if the double homicides are related or concern gang activity, he said officers see no connection among the matters yet, but suggested he couldn’t reveal certain information to the public.

The commissioner also told people not to be afraid to go about their daily lives this holiday season.

“Trust me, you are not targeted. You heard it from me. I am telling you what we know, everyone else said what they know. We are very aware of what’s going on and we will not let you down. We understand that when you have one, two, three killings that is always an issue, not so much the numbers, but the fear, and we are doing everything we possibly can to reduce that fear of crime.”

There were 89 murders from January 1 to December 18, a decrease from last year’s 122 murders in the same time period, according to police.

The number of shootings also declined, from 110 to 67, a difference of 39 percent.

The only major crime category that saw increase in reported incidents is rape. There were 55 reported rape incidents in 2018 to date compared to 49 in 2017 at this point, an increase of 12 percent.

The police and politicians need to stop this foolish practice of bragging until they have REAL results. I guarantee you NO ONE feels safe in Nassau.
EVERYONE needs to be extra cautious and on high alert especially during the Christmas season. A word to the wise is sufficient!

There is no denying comrade police commish and members policeman's forces have tough job but what media is reporting does not jive with what officials are proclaiming. The fear is there for damn sure. All you have do is to zoom out to look at the media reports that point to something likes (21} policeman's involved shootings thus far year 2018. That rapes are up, domestic violence have skidded off charts... isn't it unfair pass off blame on shoulders the now {dead} female victims for contributing their being gunned down.

“Trust me, you are not targeted. You heard it from me. I am telling you what we know, everyone else said what they know. We are very aware of what’s going on and we will not let you down. We understand that when you have one, two, three killings that is always an issue, not so much the numbers, but the fear, and we are doing everything we possibly can to reduce that fear of crime.” POPPYCOCK! LISTEN TO TELL IT IS, NOT THIS B.S.

Why are "alleged killers" running around on bail with these so-called ankle bracelets, which are more like status symbols than anything else, with the exception that those in control seemingly having the ability to locate such persons at will? Not sure whether persons can be located if they move out of a certain range. Why are murder suspects not kept in custody until trial?

It may just be me but is this comment not highly offensive?

“Be careful with the company you keep.”

“I shall not go any further than that,” he said to the press. “Y’all are intelligent people.”

Ma Comrade TimesUp, yep be careful who you does keep company with. Going back before this Commish's appoint - starting back on 10 May, 2017, didn't 91,409 we citizens - not recklessly decided enter into 5-year keeping company arrangements with 35 of questionable intent candidates from red shirts party? { Can't just be making this up, why true intent the 35 is fair question }.

EXCELLENT WORK BY THE POLICE...!!!!.....My heart goes out to the manyhardworking men and women who serve. THeres is a difficult job whichinin.....so far over the decades has been one of SUPPRESSION INSTEAD OF ELIMINATING OR ERADICATIMG CRIMINAL ELEMENTS.......WITH SUPPRESSION ITL LIKE PRESSING DOWN A SPONGE AND IT BOUNCES BACK AGAIN....WHAT IS NEEDED.........stead of the Police taking the brunt or most cases the FULL FORCE OF CRITICISMS FOR OTHERS ... IS FOR THE .....LAWMAKERS...POLITICIANS.....DEAL WITH THE MANY FACITS CONTROBUTING TO .....CRIME....DISPARITIES....UNEMPLOYMENT...EDUCATION....POVERTY...INJUSTICES...NO OR LITTLE PROTECTIONS FOR THE PORE WHO GETS RAILROADES CHEATED VICTIMIZED ETC...LACK OF OPPORTUNITIES ....CORRUPTION....CRONYISM BETWEEN RICH ELITES POLITICIANS......BLATANT WASTAGES OF TAX DOLLARS......DEPRIVING PORE AT THE BOTTOM NEEDING HELP MOSTEST NOT GETTING IT......UNFAIR TAXATION SQUEEZING PORE MORE....UNFAIR JUSTICE SYSTEM.....etcetc.......BUT ALL BEEN DONE AN SEEN SEEMS......RESULTS.. IS THAT THERE IS PLENTY OF STATE FUNERALS....AWARDS BANQUETS...BIG TIME HONOURS....while poverty increases...corruption....d grade education...morean better schools...teachers....nurses.... jobs....public health needs ...erryting pore an less fortunate needs............!!!!

Does this man drink flit before he makes a public statement? Yes it is good advice for everyone to be aware of the company they keep but is the converse of that also true? If a so called ‘ bad boy’ or former offender cleaning up his life and trying to go straight, shouldn’t he also mind the company he keeps? Would it make the crime any less serious if these young men are shot down and killed with a group of thugs or active gang bangers rather than a spouse, a friend or a family member? Based on the commissioner’s repeated idiotic statements, the Department of Corrections should be changed back to Fox Hill Prison because the commissioner does not believe in reform.

Ma Comrades, as long as you cannot leave the premises at your own free will - means regardless what you want call it - tis still a prison. Credible reports point to longer prison sentences contributing to increased criminal activity.

I say this respectfully, in 1995 me and my family left Nassau because of the 3 C's, the crime, the cars, and the crowd. 23 years later, it was a good move. Nassau will get no better, we sing the same song and dance every year, blame the police, blame the politician, get our houses all barred up, but I promise you nothing will change, it will be the same next year and the next year. The murder count is down for now but we see the same fool, Parents who don't bring up their children right, worthless fathers, no more Sunday school. Change begins within. The police are external change agent... maybe we are suckers for punishment. I wouldn't want to be watching my back everywhere I go that is why like most GB residence, we heard to Lauderdale or West Palm Beach. My police experience has taught me that between November and December 25 of every year crime will be at its highest.that was how it was in 1995 in Nassau, which caused me to leave. Every police officer knows that, so they do their best, nuttin' to do with the red shirts or any other shirt color. I get offended when people who don't know about front-line police work criticize the efforts of police officers but fail to join a crime watch group, the police reserves or be more active in their community.

Your comments are heard and understood. I do believe it would greatly help if this country, like the one you have adopted, would raise the minimum educational level and, correspondingly, remuneration of its police officers.

If we are to buy the COP’s argument that it is a small group of individuals wreaking havoc on the rest of society then why is the age group of both the persons getting murdered and also those doing the killings, especially be increasing? But they remain constant between 18 and 25. And if the persons carrying out criminal activity is just a small group, then where does the 1,000 plus persons who were murdered over the decade fit in. According to the police many of these persons, who were killed, were prolific offenders or, at least, known to the police. Now they are being killed because of the company they keep.

We just need the Magistrates & Supreme Courts and the DPP/AG to get their act together and clear the backlog of cases ......... even if it means amnesty for minor offences and/or retiring files that are past "statute of limitations". We have to find some solution to the congested Courts dilemma in 2019.