Ferguson: Our Focus Is Fighting Crime 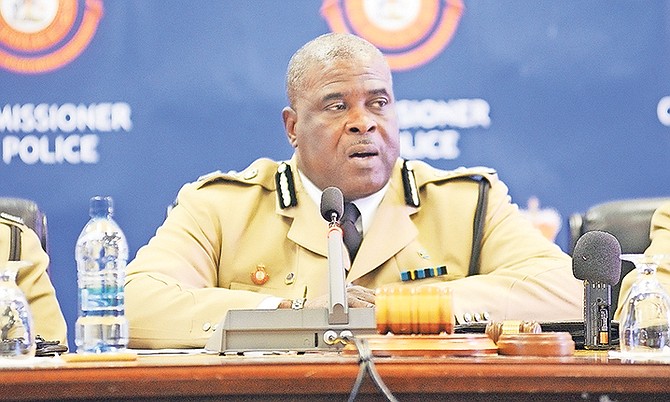 POLICE Commissioner Anthony Ferguson was yesterday noncommittal about rising concerns of increased fatal shootings by the police, insisting the Royal Bahamas Police Force adheres to its mandate to prevent and detect crime.

Less than two months into the year there have been six fatal police-involved shootings, the most recent two incidents occurring within a 24-hour period.

The frequency of these incidents has raised concern, with some questioning whether there is a mandate by the police to shoot criminals with intent to kill.

“Are there any concerns about citizens of the Commonwealth of the Bahamas being robbed (or) being killed? I think once that question is answered then we have a fair position,” Commissioner Ferguson said yesterday when he was questioned about the concerns.

Earlier he told The Tribune: “I don’t want to comment on matters that are being adjudicated before a constituted court of law. The police mandate is to prevent, detect crime and arrest persons who commit crime and I think that is the other half. Anything else outside of that is in another spectrum. I will not be one of those who crosses over and I am going to be responsible for my mandate.”

A senior police official, not authorised to speak publicly, suggested the process which occurs after an officer shoots a suspect may leave the RBPF open to serious problems.

Apart from matters being referred to the Coroner’s Court, as is the case with all police shootings, the official said there are no set rules that dictate an officer involved in a fatal shooting be placed on leave pending the outcome of investigations or that those involved be subject to psychological evaluation.

The decision to place an officer on leave is left up to the discretion of the police commissioner who will make such a choice based on the circumstances surrounding an incident.

On Wednesday, former Court of Appeal President Dame Joan Sawyer urged officials to “speed up” coroner’s inquests into such cases to foster “the needed peace”.

In an interview with The Tribune, Dame Joan expressed concern over the growing length of time between police-involved shootings and the coroner’s hearings.

She suggested turmoil is being allowed to fester on both sides of the divide in the absence of “clear-cut facts which only the law can offer.”

Since November 2017, there have been 11 fatal police shootings, according to The Tribune’s records.

Reflecting on those numbers, Dame Joan said those figures paint a bleak narrative because they are not juxtaposed with statistics of how such matters were resolved.

“How do you say it, justice delayed is justice denied,” Dame Joan said.

“I’ve seen these matters first-hand, so I know the pain involved. So when I speak, that is where I speak from. You can’t have the narrative continue as is because the public will get exhausted when they don’t see the end results.”

She continued: “We need to bring speed to the system so that when we hear (police-involved shootings), we think fair and justice. Not leaning one way or the other, just the thought that no matter what happened or how it happened, that it was resolved and the matters of fact presented.

“To get to it, address it, and allow the resolution to happen; you understand what I’m saying, resolution means a true peace.

“By the time they get to (cases), only the family remembers. The public has already moved on and forgotten.

“I wished the system addressed these cases in a faster fashion. I always operated with the view that you have to clear the deck particularly in these matters because you want to advance the thought of peace on both sides.

His comments came after two men were shot dead by police in separate incidents Sunday and Monday.

Mr Dames insisted officers are responding in-kind to what they encounter on the streets. He said the process has always been and continues to be transparent.

He insisted police are not in the business of “arbitrarily taking people’s lives,” and that whenever someone is wounded or killed by police, it must be justified.

Mr Dames called on Bahamians to recognise that modern-day officers are no longer operating in the Bahamas of the “70s and the 60s,” stressing that police now encounter more assailants who are inclined to engage them with firearms.

Mr Dames, a former senior police officer, said the public should avoid getting lost in statistics of police-involved shootings and take a critical look at the circumstances in which they occur.

In the two most recent incidents earlier this week, police shot and killed men said to have a criminal history. Police said a man killed on Sunday was engaged in a drug deal and opened fire on officers, while the man fatally shot Monday produced a knife and advanced towards them.

More ethnic cleansing than fighting crime. One only needs to read some blogs on The Tribune’s web site yesterday and connect them to comment made by Donald Trump a few days ago about the MS-13 gang to understand what’s behind all the murders and police killings in the Bahamas and the Caribbean. It is a dirty, wicked, nasty plot that hopefully backfired on the ones who planned it. One cannot cannot effectively lead a police force and not keep current of world wide events. You end up killing people only to find they were victims of a nasty plot. And the armed forces in this country must be vary of who they share their intelligence with and who they take directions from. There is much false information being put out about young men in the Bahamas and the Caribbean to support the murders and justify the police killings.

Was there one shooting in which a weapon was NOT involved?

Same as white boy shooting 17 of his schoolmates and school staff right? what weapon was involve in this tragedy?

Wanna know where the weapons coming from? When the US Department of ATF's "fast and furious' operation was in effect where they claim they were "selling guns" to trace Mexican gun cartels, over 1,000 of these weapons, including assault rifles similar to the one the school boy used, went missing. And around the same time these type weapons started showing up for the first time on the streets of New Providence....still wanna know here the weapons coming from? Even a US sitting judge has been charged with this weapons trafficking scam and has yet to serve one single day in jail. Meanwhile young men in this country continue to be killed like flies.

So. what can we do about it? Can't just sit back and let those gangbangers kill us without judgement, and trying to resolve matters peacefully failed with walkabouts and youth intervention programs. Those two usually work when the gang presence is at a lower level, and doing those methods will fail regardless because the rewards of being a gangster, prostitute or drug dealer within a gang is better than being an honest citizen and outweighs the risks associated with the job.

This is foolishness. People need to make up their minds whether they want reduced crime or not.

Besides that, the article says "...about rising concerns of increased fatal shootings by the police". Really? Concerns by who? Dame Joan by herself...or are there others out there who have simply overlooked identifying themselves?

What do they want police to do when faced with violent threats by these gangsters? Turn around and pull the back of their pants down, show them their boxer shorts, then run home and hide under their bed?

Why don't they call in by phone and register their complaint and then the police can keep a database of people's numbers not to be responded to when they dial 911 in the future. They can offer the criminal a lollipop and shower him/her with flowers and compliments.

The country wants less crime but, more importantly they want less killings. They don't want their sons and daughters being killed by criminals, by the police, by the CIA the FBI, the DEA or the NBA.. if a crime is permitted let natural justice prevail...don't be a dirty dog that refuse to bark...but still take the law into your own hands..

Then let’s tie it in to the US Stat Department release about the Bahamas and see if it makes sense.

A different spectrum? I hope this was just a word misquoted by the reporter, perhaps he actually said sphere. I like the idea of dash cams and body cams. Ones that the officers can never turn off while on duty. Recorded footage of police killings subject to review by a panel not answerable to the RBPF.then I could start to have some faith in the organization again.

Live by the sword etc.etc.

Actually i live in Chicago and only in Nassau by extension..and what is your point?

Certainly we as a society would like to reduce the crime rate in the Bahamas, in particular, murder. However, we still live in a society where a person is considered innocent until proven guilty. Yes, even those who look the part. What this country really needs is an independent commission to police the police, just so that at least there appear to be some form of impartiality in the system. The body cams is another very important element that should have been implemented long time ago. The problem with Bahamians is that we love short term results without even looking at the root of the problem. No Bahamian should rejoice when our young men are being taken out like flies!

Actually @John isn't far off the mark in some respects. Fifty years ago when I was a teenager, the police embraced what suspiciously seemed to me to be a Wild West type policy of shooting criminal suspects who they considered to be Wild West type bandits. My first memory is their shooting a man named L'il Ounce who they accused of all sorts of misdeeds. Then in more recent times we have criminals on bail getting shot or shooting up others under mysterious circumstances and few arrests made, few charged and few convicted. But Commissioner after Commissioner complained about persons let out on bail possibly to commit more crimes but some of them get killed before ever going back to court. Commissioner Ferguson seemed unconcerned that civilians are being killed by his officers not all of whom are armed with guns or shooting at police officers. The persons investigating these shootings are police officers under the Commissioner's command. So there's no independence in the process. Who can forget the police shooting of the young man in the back of the old City Market near Kemp Road that was never satisfactorily answered by the force? Police officers are given the ability to carry and use firearms but it also comes with the heavy responsibility to be answerable whenever the firearm is used, not a cloak to kill anybody, anytime, anywhere and then holler that "it was justified" just because you wear the uniform. It's not a licence to kill indiscriminately but under very strict and controlled circumstances that have to be explained and stand up to public scrutiny.

COP Ferguson reminds me of those African junta leaders from Liberia or Sierra Leone etc. ..... The criminals better be shitting their pants to imagine meeting this man in Interrogation ...... smh

A fight broke out on a Carnival Cruise ship in the South Pacific. Twenty five passengers were booted from the cruise for fighting with the ship's security and other passengers. security used handcuffs as knuckle braces to beat down and subdue the unruly passengers. Ya think the US State Department will issue travel advisory for Carnival Cruises?