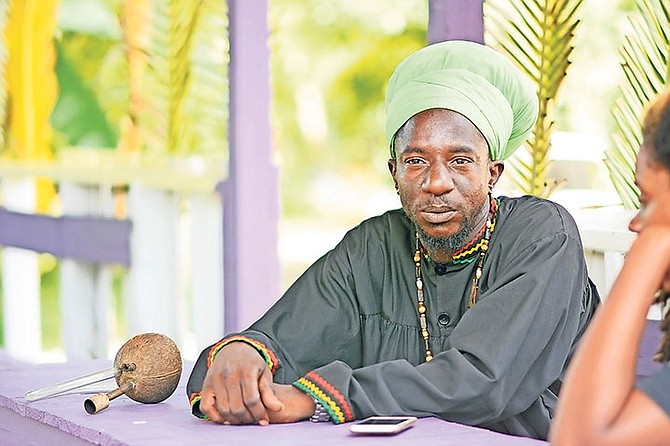 RASTAFARIAN communities in The Bahamas are calling for reparatory justice in the form of state recognition and inclusion as national discourse over marijuana law reform picks up steam.

Priests canvassed by The Tribune said they expected the government to follow the track of Jamaica and Antigua, whose leaders have issued formal apologies for the longstanding oppression inflicted on Rastafarian communities due to their sacramental use of the plant.

The government has reportedly held talks with the Bobo Ashanti - formally known as the Ethiopia Africa Black International Congress (EABIC) - for the past three months concerning sacramental rights; however, confidence over the inclusion and equity stake of Rastafarians was not widespread.

An overriding concern among faith leaders was that the community be placed at the forefront of national discussions on marijuana law reform and commerce as it has led agitation over liberalisation of the plant for decades.

“We are the vanguard,” said Elder Peter Sheffield, of House of Nyabinghi. “We are the one with the stigma, who have been persecuted for herb, couldn’t get jobs, banned from society. Right now it is coming to a closure on this but it’s like they pushing us aside and saying they don’t recognise the Rasta. We smoked it straight through so it’s too complicated. It’s a way of life for us, it’s nothing to do with recreational or medicinal or how they glorifying it.

“I’m almost 60 and they still have me as a criminal from 1985. I’m looking for even compensation from the government and all. It’s been too long they’ve hold us back, our families got held back because we are Rasta. Separation of families because we’re going to jail. We look at it as a personal thing, leave it alone and let us be. This is my sacrament, we use it in our tabernacle.”

Although Rastafarianism has no singular hierarchical structure, there are distinct sects commonly referred to as “mansions”. The two groups said to have the largest presence in the Bahamas are the House of Nyabinghi and the EABIC. Prominent study groups include the King of Kings Missionary Movement and the ASFAW, African Sisters for all Women.

The EABIC is headquartered in Jamaica but has branches throughout the diaspora, ambassador and head of the Bahamas branch, Priest Rithmond McKinney told The Tribune.

“(Cannabis) it’s part of our rituals, our celebrations and our service,” Priest McKinney said, “so it was something always been a part of Rastafarianism from conception. We have always used it as a sacrament. From I become a Rastafarian over 30 years ago it was big stigma on us. Something they used to castrate us, oppress us, all negative things toward us they used marijuana. They called it dope, then called us drug dealers. We been oppressed over the years because we know this is a natural plant, this is our sacrament and we use it as part of our service and we continued using it. We never stopped although we went through all the oppression.

“We are a church, this is a community, we believe it’s our sacrament. Our community feels good in ourself, the conversation is on the table, and we are agitating for our sacramental/medicinal rights. Not necessarily we want decriminalisation or legalisation for recreational use - that should be natural. We want our sacramental rights.”

The EABIC’s Bahamas branch compound on Fire Trail Road is commonly referred to as the “Rasta camp”; however, the House of Nyabinghi is located on Polemus Street off Nassau Street.

Priest McKinney said the Fire Trail compound was registered to the EABIC, and represented a formal acknowledgement of the group by the state. He explained while successive Progressive Liberal Party and Free National Movement administrations have recognised the church, stigma surrounding marijuana has heavily influenced the government’s approach.

Priest McKinney said the compound should be afforded the same respect and protection as any other embassy or diplomatic community.

“Our culture, well-being, and spirituality has been interrupted by first, the colonial powers. Slavery is the biggest interruption of our civilisation. Rastafari members were then hunted by the neo-colonial authorities and our service sacrilegiously interrupted, and sometimes our camps burned down, and our women are sometimes being violated by officers and it’s a number of things.

“We are being eclipsed by those snakes and vultures that are coming up now and everybody’s seeking to benefit from our pain and suffering,” he added. “We suffered under the criminalisation of marijuana more than any other social group in the Bahamas and if it is to be legalised, I think that there should be a pardon issued to the group on behalf of the government of the Bahamas - simply because it’s the government who would be seeking to benefit.”

Priest Blyden noted there has also been a paradigm shift within the Rastafarian community with groups moving from isolationist to more engagement with the wider public.

He said despite the use of Rastafarian culture like Ital food and health practices becoming more mainstream, the groups have not been recognised as pioneers and thought leaders for social change.

“We are still being pushed back and our message is being suppressed and eclipsed by all of this sensationalisation of medical marijuana and CARICOM reports, reparations, and yet we are the leaders in all of these fields,” Priest Blyden said.

CARCOM’s report released last week suggested expunging criminal records to remedy past injustices as it called for its declassification as a dangerous drug.

The commission recommended marijuana is decriminalised for personal use in private premises and medical purposes before being fully legalised.

Priest Jevon Thompson, EABIC, explained the absence of a standardised policy for the community has left its membership to battle legal challenges over their sacrament on an individual level with varied success. Priest Thompson said he has successfully defended his rights in court but the community was currently engaged in raising funds to assist with legal costs of an incarcerated member.

Priest Thompson expressed optimism that liberalisation will affect a lessening of the discriminatory practices but only if Rastafarians are included in the debate.

“The public needs to have an understanding of the debate,” he said, “what we have come to understand is what we were taught about marijuana was wrong. We were taught lies and propaganda, the public has to recognise that wasn’t the truth.

“Learn the truth, accept the truth,” Priest Thompson added, “and I think it will take some of the stigma from us. We would be more recognised because we are like shrouded in mystery.”

Yesterday, Priest McKinney invited the public to the Bobo Ashanti’s celebration to mark the birthday of Emperor Haile Selassie I at the Fire Trail compound on July 23.

Apologize to them, apologize to Bahamian men whom couldn't get jobs because their hair styles weren't 'professional' too. We stigmatized all things Rasta for too long. They are people too and they too can and will pay for legal Cannabis.

When the Rastas use to ride around selling peanuts on bicycles, they would usually be the first ones to get blamed for any crime that happened in the area. The police would come and snatch them off their bicycle, throw them in the car and leave the bicycle and bag of peanuts on the side of the road. And by the time they were taken to the station, processed and released, the bike and the peanuts were long gone. That is unless some upright and compassionate person had the decency to secure the items for them. Today the Rastas remain more stationary when selling their peanuts or juices and are sensible enough to get off the streets before sunset. Making sure not to be accused of any crime or a victim of it. And their use of marijuana for religious purposes was in effect long before the various medical benefits of marijuana were discovered. And their fight for the right to use it for such was equally as long. Religious freedom then!

A recognition not known in any other country on Earth, not even in Ethiopia. If you accept this, every dope smoker charged in court in the Bahamas will claim a religious exemption.

Rastafarianism is a cult ........ Just like the Scientologists, Mormons, JWs and SDAs ....... And look at how the institutional Church treats the others.

Cult or Religion: " Rastas often claim the flag of Ethiopia as was used during Haile Selassie's reign. It combines the conquering lion of Judah, symbol of the Ethiopian monarchy, with green, gold, and red. Rastafari, sometimes termed Rastafarianism, is an Abrahamic religion that developed in Jamaica during the 1930s. Scholars of religion and related fields have classified it as both a new religious movement and a social movement. There is no centralized authority in control of the movement and much heterogeneity exists among practitioners, who are known as Rastafari, Rastafarians, or Rastas.

Rastafari refer to their beliefs, which are based on a specific interpretation of the Bible, as "Rastalogy". Central is a monotheistic belief in a single God—referred to as Jah—who partially resides within each individual. The former emperor of Ethiopia, Haile Selassie, is given central importance. Many Rastas regard him as an incarnation of Jah on Earth and as the Second Coming of Christ. Others regard him as a human prophet who fully recognised the inner divinity within every individual. Rastafari is Afrocentric and focuses its attention on the African diaspora, which it believes is oppressed within Western society, or "Babylon"."

Cult or no cult, I respect Black awareness over European Colonialist Ideology.

FYI .......... Africans do not see Westernized blacks as bona fide Africans ...... So we need to stop this illusion of pan-Africanism ....... Even Haile Selassie did not accept the Jamaican Rastas as "bretheren" when he visited Jamaica ...... SMH

IMHO, It's quite understandable why native Africans think that way about Western colonialized 'Blacks', "As a man/woman thinks so is he/her" most belief systems are an illusion including many in the African Continent. Every belief system requires one to be 'saved' or converted into THEIR way of thinking to be accepted, so for "Westernized blacks" we just need to shed the thinking and indoctrination of our colonialist masters, ...well that's until you get 'saved' to the current African belief system and realized they're suffering from colonialism too.