‘Actions On Family Islands Must Stop’ 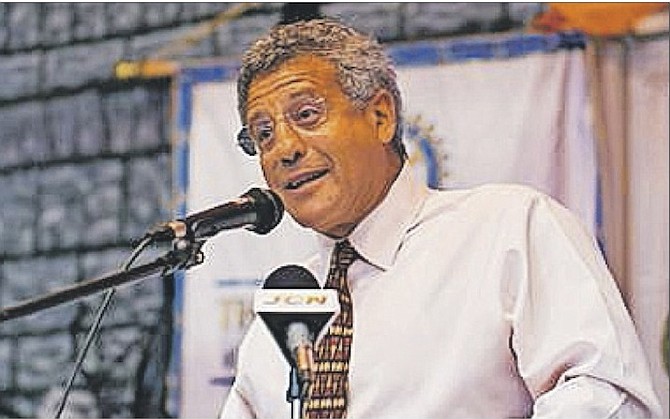 ATTORNEY Fred Smith yesterday warned the government that it was treading on the “thin ice of contempt” for pressing ahead with efforts to eradicate shanty towns in the Family Islands despite the pending judicial review.

The government’s position, according to Labour Minister Dion Foulkes, is the court injunction blocking evictions and demolition in New Providence was not extended to other islands, and enables the government to forge ahead with mobilising efforts in the Family Islands. Mr Foulkes is also chairman of the government’s Shanty Town Action Task Force.

However, Mr Smith said 88 of the 177 shanty town residents seeking judicial review of the government’s decision are from Abaco, and questioned why the government hasn’t opted to halt the process completely as it has done with the gaming taxes on web shops, which was halted pending the outcome of court action.

Mr Smith, who is representing the group, said: “To continue I think it is appalling of the government, and shows no respect for the rule of law to continue to terrorise the Family Island Haitian ethnic communities with this inhumane and degrading threat to demolish their homes. Because that’s in fact what it is, to continue to parade the might of the state and proclaim their intention to demolish homes whether or not there is an injunction, the matter is before the courts.

“So just like the Attorney General (Carl Bethel) has put the increase in the gaming tax in abeyance pending the determination of court case brought by Wayne Munroe and Alfred Sears, a civilised government would stop abusing the population until this is determined. Why should I have to go and get another injunction?”

Mr Smith added: “That is only going to increase costs unnecessarily and waste judicial time. They haven’t even applied to set aside the injunction we got for 88 residents in Abaco and those in New Providence.

“I urge Minister Foulkes to remember that the injunction does indeed apply to over 88 homes in Pigeon Peas and the Mud and so he is treading on a thin ice of contempt if he doesn’t stop terrorising these citizens, Bahamian citizens most of them, in Abaco.”

He underscored all shanty towns in the country were located in constituencies held by the Free National Movement, adding he found it ironic the Minnis-led administration had taken the stance to hound its own voters out of their homes.

“I just don’t understand where the government thinks these human beings are going to go,” Mr Smith said, “especially in the Family Islands where alternative affordable housing is non-existent.

“The continued insistence on harassing human beings in the Family Islands is a manifestation of institutionalised state terrorism just like (former Minister of Immigration) Fred Mitchell under the Progressive Liberal Party.

“It is psychological warfare on Bahamian citizens, citizens in waiting, spouses of Bahamians, and worst of all, simply poor people. What’s most ironic, the FNM doesn’t seem to understand that every single shanty town is in an FNM constituency, so they are hounding their own voters out of their homes.”

"...plan to visit more Family Island shanty towns to get more residents to join their suit against the government."

Exactly the way they think, and eventually as their population increases they will totally destroy our government and the Tonton Macoute will rule the day.

"...that every single shanty town is in an FNM constituency, so they are hounding their own voters out of their homes.”

Here, using the threat of their numerous votes. I've said many times, nobody understands Pindling's "majority rule" better than Haitians. They are becoming the majority, flying into the maternity wards quicker can than you can say "court injunction."

Actions of Fred Smith must stop! He is the #1 Enemy of The People of The Bahamas.

This is a modern day soft version of what Hitler was doing. Claiming his white skin was better than the other white skin. What High Level of Ignorant Governing is this? This group of humans have been in this country for decades now. They are not the problem. Human ability to coexist and use natural resources responsibly is our problem on a global scale. Why don't we start cleaning up neighbourhoods the way gated communities keep their places? Take all the garbage on Earth and throw the garbage into a mildly active volcano. That will get rid of all your garbage problems for sure. Instead trillions of dollars have been spent making the space closely outside of earth look like a dust ball. Build a community first for them to move into. Obviously they are working humans who can afford something. Build then demolish. And do the same for Bahamians living in ghetto like experiences. Build then tear down. Not tear down then look at each other. Forward not Backwards. This is apart of our National Anthem. For crying out loud we are embarrassing ourselves on a Global scale. Be The First to Set Yourselves Apart Bahamas. End Human Prejudice and Exercise Just Reasoning And Actions. Our lifespans are short, why do we strive for stress? This planet is free to us all. Stop creating misery. Do the opposite of what you're doing now. Wow.

Coexist and use natural resources? Haiti is much more blessed with natural resources than we are. You cannot coexist with people who choose to live in squalor and have 7 children per family to enjoy the garbage dump conditions with them. What kind of people are these? What kind of people breed ceaselessly inside a garbage dump? Do they have no love for children? Jesus said "Suffer the little children to come unto me." He didn't say anything about making them suffer in garbage dumps.

I don't understand how Haitians are "voters". Maybe he should start by explaining that simple point.

OldFort - the talking points these days are that the shanty towns are full of Bahamians and that if we move against them we would only be hurting our own people. Sounds like a hostage negotiation.

The truly sad part of the whole thing is the staggering number of Bahamians that are too dumb to realize that Haiti has declared WAR on the Bahamas. Just because they don't see army tanks rolling down Bay Street they assume we are not under attack.

Trust me - army tanks would be much better. One shot and you're dead. Over. This current method is like watching our country waste away slowly like a skin-and-bone cancer patient.

Fred Smith tells the press that he will make sure that the government does not break the law and suddenly all the people who hold a serious antipathy for the Haitian people start to post about being invaded and taken over. The sound just like the forty fifth.

Bulldoze the heck out of those homes! Get it done and done effectively! This is a developed country with standards of living that are just as good as first world countries. I don't care who lives in those shanty town homes, bulldoze them for the sake of all of us!

Smith is creating the atmosphere of a populists vigilante mandamus . . . like they created in the DR. . .THE PEOPLE HAVE ALREADY SPOKEN. . .THERE WILL BE NO SHANTY TOWNS. . .THE WORLD IS SUPPORTIVE OF THIS NATIONAL POSITION!! Let Smith talk all he like.

The result of that strategy in the DR resulted in 100, 000 of Haitians losing their DR citizenship, deaths and populists vigilantism by mandamus that deported many Haitians across the Haitian/DR border. . .LET SMITH CONTINUE WITH HIS RECKLESS AND LAWLESS WAYS. . .I HOPE HE CAN WEAR THE HAT HE IS BUILDING FOR HIS PEOPLE!!

A question how could Fred Smith fight for Haitians rights in the Bahamas, & using the Bahamian courts, for these majority of people in them shantytowns on state property, on a work permit?

So what is his real motif?

Just got an update from AIM. They are going back to doing this the old fashioned way i heard BIG CATS bulldozer is getting loaded up to move there right now no more mud no more peas no more crime in marsh harbour

Photo op.....if these shanty town occupants choose....before the bulldozers get to the homes.....the pregnant women....and the ones with small babies....would form a human barrier in front of the bulldozers.......usually makes for excellent....photo opportunities....especially if a uniformed person touches anyone......standard strategy..... To date cannot ever remember any of the QCs peers, dozens of them.....ever publictly.....came out to condone his actions....no church leaders....political leaders....Bahamian patriots.....Nationalists.....?????....where are the Bahamians who wants up to serve the people in the next Election.....????......