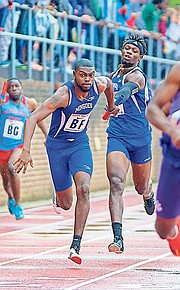 Kendrick Thompson hands the baton to Verdell McIntosh for the final leg of the men’s 4x200 metre relay in the college men’s division at the Penn Relays. The team of Anthony Adderley, Yurick Dean, Thompson and McIntosh finished in a time of 1:26.65 to end up 12th overall out of 32 teams.

PHILADELPHIA, Pennsylvania — The UB Mingoes turned in strong performances at the 125th running of the University of Pennsylvania Relays over the weekend despite the rain and weather hurting much of their performances.

“It was a satisfying performance overall but I expected a bit more,” said head coach Ednal Rolle.

On the main day of competition for the Mingoes on Friday, Franklin Field was drenched and temperatures dipped in the low 60s. There were also two weather delays on Friday because of rain and lightning.

Coach Rolle also felt the weather was a big factor in the decathlon with national record holder Ken Mullings not repeating as Penn Relays champion. 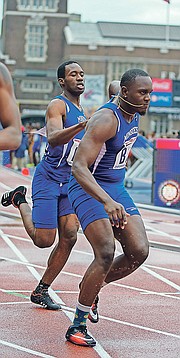 Anthony Adderley hands the baton to Yurick Dean for the second leg of the men’s 4x200 metre relay.

Despite not clearing any height in the pole vault, Mullings finished the decathlon competition with 6,649 points - 143 points behind the winner.

“This again was weather working on him during the competition,” Rolle said. “As he approached on his final attempt the pole slipped and he almost hurt himself.”

The team of Kendrick Thompson, Anthony Adderley, Yurick Dean, Clyde McKenzie won their heat in 42.53 seconds on Friday. The team finished 32nd overall out of 64 teams in the competition. “We performed pretty well for a team that was running in the rain,” said Yurick Dean, who ran the third leg.

In the men’s 4x200m relay, Anthony Adderley, Yurick Dean, Kendrick Thompson and Verdell McIntosh had some clean exchanges on Friday and finished in a time of 1:26.65. The team finished 12th overall out of 32 teams. 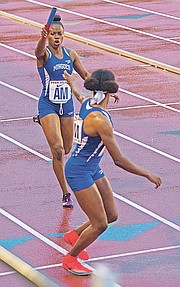 Romica Josey hands the baton to Amber Ford for the final leg of the sprint medley relay. The team of Alexandria Strachan, Gabrielle Shannon, Josey and Ford finished in a time of 4:07.23 to end up 8th in the Championship of America Invitational event.

Coach Rolle said he had hoped for more from the team.

“The weather conditions and the boys having to come in so late at night and then having to get right back up to run the next morning affected their performance,” he said.

“I had a better team on paper this year in the 4x200 after making the top eight last year and this year we only got 12th with a better team. That told me that under the conditions they were not able to perform at their best.”

Anthony Adderley, on the lead-off leg, said he believes the team did the best they could. “The guys had good exchanges,” he said. “But I think the weather played a big part in us not performing as best we could.”

Anthony Adderley, Donya Roberts, Brandon Hanna and Tyler Gardiner hit the track in the sprint medley relay for the Mingoes. The sprint medley is run in legs of 200m, 200m, 400m and 800m.

The team finished in a time of 3:37.17 to take third place in the second heat and 10th overall.

“The weather was playing a big factor in how we performed,” said Brandon Hanna, who ran the 400m leg of the medley. “I use the analogy that in the last 100m a monkey jumped on my back and I just couldn’t get it off.” 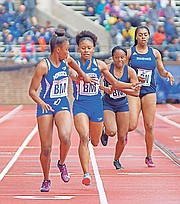 Gabrielle Shannon hands the baton to Romica Josey for the third leg of the women’s 4x200 metre relay. The team of Destiny Pratt, Shannon, Josey and Alexandria Strachan ran 1:44.39 to finish 26th overall. There were 41 teams entered. Photos courtesy of UB Athletics

The team of Amber Ford, Romica Josey, Jodie Miller and Gabrielle Shannon opened competition for the Mingoes on the track Thursday in the 4x400 relay.

Alexandria Strachan, Gabrielle Shannon, Romica Josey and Amber Ford represented the Mingoes in the sprint medley. The sprint medley is run in legs of 200m, 200m, 400m and 800m. The team finished in a time of 4:07.23 to finish 8th in the Championship of America Invitational event.

“We could have had better exchanges but we did the best we could have in the rain,” said Amber Ford, team captain and anchor leg runner.

“I think we performed okay, we could have done much better if we had a little more relay training but we had a great performance.”