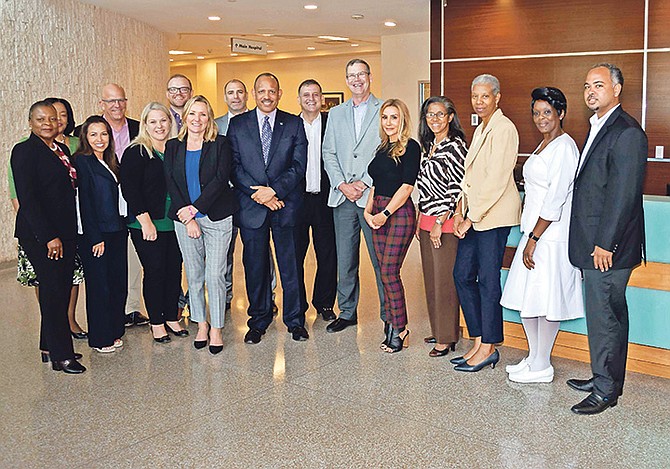 The Health Minister apprised the group on improvement works earmarked for the southern corridor of the Children’s Ward, pointing out the critical need for major upgrades to the roof, ceiling, electrical and air conditioning systems.

The upgrades, he noted are part of the Public Hospitals Authority’s objective to ensure that PMH’s pediatric services meet all regional and international standards. Dr Sands also led a tour through the accident & emergency department where he informed the group about the progress of the ongoing urgent & emergency care project. A stop was also made at the pediatric emergency unit and asthma bay, before the Disney group visited the critical care block’s neonatal intensive care unit.

In 2018, Disney announced a five-year, global commitment of $100 million to help reimagine the patient journey in children’s hospitals through its signature philanthropic initiative, Disney Team of Heroes. The company’s interest in the improvement projects at PMH stems from Disney’s long-standing charitable commitment to children facing serious illness and their families, which goes back to founder Walt Disney.

PHA Managing Director, Catherine Weech, PMH Hospital Administrator (Actg) Sonia Rose, Consultant Pediatric Oncologist at PMH, Dr Corrine Cinquee-Brown, and Nicholas Reece, a member of the Public Hospitals Authority’s Board of Directors, joined the Minister for the tour. Following the tour, the Minister met with the Disney team to briefly discuss how the organisation could potentially help with the important projects earmarked for pediatric services at PMH.

The Disney representatives expressed to the Minister that following the tour at PMH, they would be touring two of the public clinics in Eleuthera and are in discussions to support upgrades to those health facilities.

Yes, yes the comrade PeoplePublic don't believe Dr. Duane should have any reason be picture perfect propaganda smiling along with Disney executives when they still haven't been held accountable, knowingly and intentionally dumping shi# in waters Colony of Out Islands - so says US court filings, going back year 1998, which makes it strange this is now the third governing administration red shirts pleading the 5th, yes, is it not strange?

Do we really believe the Mouse people give a squeak about our medical facilities? That's another funny one!

Very nice of them. Where were the characters for the kids?

Something just ain't sitting right with me on this one!