PM kicking down door was ‘not a good impression’ 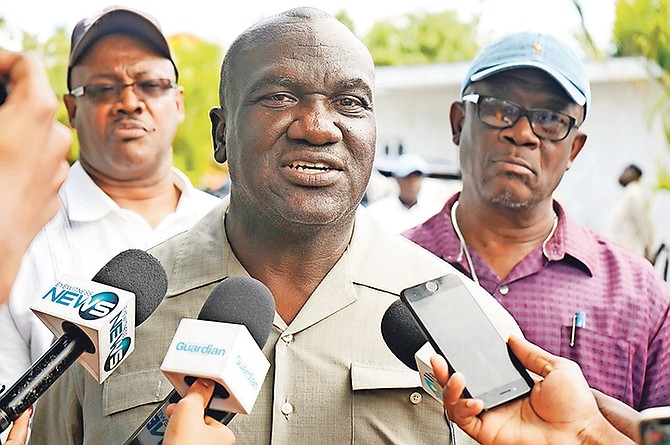 BAHAMAS Christian Council President Bishop Delton Fernander said Prime Minister Dr Hubert Minnis went beyond the duties of his office when he kicked down the back door of a shanty town structure.

In an interview with The Tribune yesterday, the BCC’s president said this approach did not present a good impression to the world as it suggested the Bahamas is “strong-arming” and forcefully handling illegal immigration problems.

As a result of his actions, the prime minister will have to face whatever criticisms might come his way, Bishop Fernander said.

“Obviously he is the leader of the country and he is trying to be I guess visibly seen on the front lines doing things, but I don’t think that’s a job for the prime minister,” he told this newspaper.

The Nassau Guardian reported yesterday that Dr Minnis kicked down the back door of a structure in the Sand Banks shanty town in Treasure Cay, Abaco during a brief walk through of the community last week.

Dr Minnis was accompanied by several police and Defence Force officers and told the newspaper he wanted to make a point.

“It’s a job for the authorities in that area. They know how to do it they know what to do,” Bishop Fernander continued. “It’s not a good impression to the world to see our prime minister kicking down doors if that is the case and leading in that kind of rush.

“I think he is doing beyond his office. He is taking us down a road as a country where we seem to be strong-arming and doing this in a very forceful way.”

Speaking for himself, as the BCC has not as a body discussed its position on illegal immigration matters, the bishop said the country needed to find a medium between humanitarian duties and obligation to law.

“…At this point I believe the execution of the duties must take place,” he said when asked for the BCC’s position on the issue.

“We do not want ourselves back in a place where thousands of people can be affected by poor structures and things that can lead to their demise.

“I know it’s a difficult time for us to be correcting that problem and maybe the approach is really hard, but it is a problem that needs to be addressed and frankly we don’t need to put anybody in that kind of living conditions where disastrous results can be the same.”

He added: “So we stand as a church and I’m ready to speak in behalf of those who have a genuine right and maybe it’s loss of documents or maybe the process of renewal and if they’re being treated unfairly then the church will speak on their behalf.

“We do not expect the state to be defiling the place of sanctuary called the church in an act of just being strong armed, but we as a church will do our part not to be harbouring anybody that is illegal or anyone that is not properly documented in the Commonwealth of the Bahamas and we are willing, the church, to work along with the state in this regard so that those who legitimately have a right and those who might have reached the age and has not applied we can work with them so that this can be brought to a humane conclusion.”

He also appealed to Bahamians to treat others as they would want to be treated.

Shortly after Hurricane Dorian wiped out shanty town structures in Abaco, the Minnis administration announced a six-month construction ban in those areas. Last week, Dr Minnis revealed he had asked Attorney General Carl Bethel to compulsorily acquire the land where shanty towns in Abaco once stood.

Dr Minnis also told undocumented migrants to leave the country voluntarily – or be forced to leave.